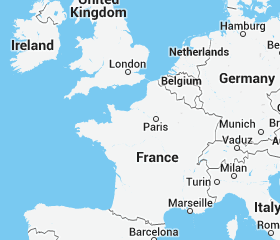 France is one of the largest and most important wine producing countries in the world and creates between six and eight billion bottles of wine each year.  The wines produced are incredibly diverse, and include red, white, rose, sparkling, sweet, semi-sweet, and dry.  Some are inexpensive and simple, while others are famous and very pricey. The numerous styles of wines can be attributed to the diversity in wine growing regions found across France.  Two million acres of vineyards make up the predominant wine growing regions of the country and include Alsace, Burgundy, Bordeaux, Champagne, Languedoc-Roussillon, Loire Valley, and Rhone Valley.

The specific climate conditions, soil, altitude, underlying rock, and slope of the land are referred to as the terroir, and it varies greatly not only from region to region, but within single regions as well. When the same grape varietal is planted in different areas, it can produce very different wines.  From the cooler temperatures of northern Champagne, to the hot and sunny summers of Languedoc-Roussilon, winemakers cultivate whatever grape variety is best suited to the particular conditions of the region.  Because of this, certain grape varieties have become closely associated with particular regions, like Cabernet Sauvignon in Bordeaux and Syrah in Rhone.

In 1935 a system of laws was passed in an effort to protect the quality and integrity of French wines.  The Appellation d’Origine Controlee (or AOC) system was established to help protect the consumer against fraudulent activity and to assist in determining the style and taste of particular wines.  The AOC laws define the set boundaries of specific wine-producing regions, villages, and vineyards, and impose rules regarding the winemaking techniques and practices used within these areas.  They also dictate what grape varieties can be harvested within a region, the minimum level of alcohol the wine must contain, and the maximum yield allowed.  Although the AOC laws have been successful in regulating wine quality and production, it has also resulted in an increase in price of French wines as adhering to the laws and policies can by costly. Since the institution of the AOC in France, many other countries have created their own similar laws, though without as much success.

French wine originated in the 6th century BC.  During the Middle Ages it was the monasteries that had the resources and the knowledge to produce wine, and the monks were the primary winemakers. Wine was produced for mass celebrations as well as to generate income, and the wine created was thought to be exceptional.

Depending on the region where the wine was produced and the classification of the wine itself, the amount of information included on French wine labels will vary.

The highest-ranking wine classification is the Appellation Controlee, or AC.  This classification is highly regulated and includes almost all the top-ranking famous wines of France, such as Chateauneuf-du-Pape and Champagne.

Lower-ranking wines are classified as Vins de Table, or table wines.  These may be blends of grapes and are generally not extremely high quality.  The wines do not even need to come from France unless the bottle label states “Product of France.”

An appellation is a defined and protected area where grapes are grown for wine.  There are more than 300 appellations in France.