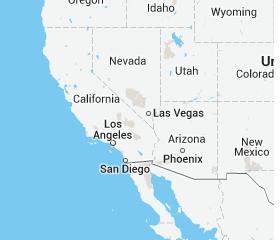 The wine country region of northern California is the premier wine-producing region of the United States.  California on it’s own is the fourth largest wine producer in the world, right behind France, Italy, and Spain.  While wine is produced in all 50 states, California accounts for 90% of US wine production.  There are over 400 wineries in the region, mostly located in Napa Valley, Sonoma Valley, Alexander Valley, Dry Creek Valley, Bennett Valley, and Russian River Valley.

Spanish missionaries established California’s first vineyard and winery in 1769.  Because the two grape varieties native to California made poor quality wine, the missionaries used the Missionary grape, also known as the Criolla grape, which had originally been brought to South America by Spanish settlers.  As the missionaries traveled north through California building more missions, they brought the vines with them, eventually reaching the Sonoma area in 1805.  By the 1830s the first secular vineyard was created in California by the French settler Jean-Louis Vignes. Unsatisfied with the overall quality of wine being produced in the area, he imported European Vitis vinifera grapes to the state. By 1850 he became the largest wine producer in California.

California’s wine industry was virtually destroyed after the depression and the Prohibition in the early part of the 20th century.  Andre Tchelistcheff is credited with reviving winemaking in California after this period and introduced new techniques and procedures such as aging wine in French oak barrels, vineyard frost prevention, and cold fermentation.  Known as the “dean of American winemakers,” Tchelistcheff is most famous for his efforts in creating the style of California’s best wines, particularly Cabernet Sauvignon.

Later, in the mid 1960s, Robert Mondavi created the first large-scale winery in the region since before the Prohibition.  This sparked new growth in the valley and the number of wineries continued to increase.  Quality wines were being produced but the winemakers were having trouble marketing them.  The German idea of labeling wines based on the varietal name was introduced and Robert Mondavi was a huge proponent of this practice.

Although California wine country was successfully producing quality wines by the 1960s and 1970s, it wasn’t until the 1976 Judgment of Paris that people took notice.  The Judgment of Paris was a blind wine-tasting held in Paris with a panel comprised of highly regarded French wine mavens.  Six California Chardonnays were compared with four French Chardonnays and three of the top-rated four wines were from California.  This was a watershed moment in the wine industry and put California on the map as one of the world’s top quality wine-producing regions.

Wineries and vineyards are the second most popular tourist destination in California after Disneyland.  Close to 15 million tourists visit the state’s wine regions annually.