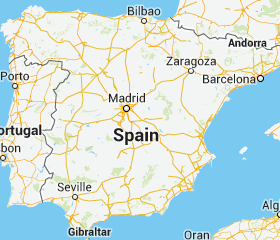 Spain has more area covered by vineyards than any other country with over 4 million acres of vines planted.  In fact, close to 16% of the world's vineyards are in Spain.  Because of the dry climate, areas with poor soil quality, wide spacing of vines, and low yields, Spain follows behind France and Italy as the worlds largest wine producing nation.  Over a third of the wine produced in Spain is exported, primarily to the UK, Germany, and the United States.

Like other wine-producing countries, the climate and geography of Spain’s different regions play an important role in the style and quality of wine produced.  The climate can be varied, with some areas experiencing very extreme temperatures or very arid conditions.  Much of central Spain is covered by the large plateau called the Meseta Central, and is characterized by hot dry summers with little rainfall and cold, often freezing winters.  Many of Spain’s primary rivers flow from this area outward to the wine regions.  Additionally Spain’s mountain ranges, such as the Cantabrian Mountains and the Pyrenees, protect the wine regions from cool wind and rain.

Wine is produced in all of Spain’s 17 administrative regions, with La Rioja being the most densely planted.  La Rioja is located in northern Spain near the French border and just 200 miles away from Bordeaux.   Rioja is Spain’s most famous red wine, and is normally made from a blend of grape varieties. The Penedes region is in Catauna and is known for its production of the sparkling wine Cava.  The Ribera del Duero is a relatively new wine growing area in Spain.  The Tinto Fino grape is the primary variety planted here and produces one of Spain’s priciest wines, Vega Sicilia.  The Andalusia region in the south of Spain is famous for its Sherry, a heavily fortified wine made by adding brandy to the wine near the end of fermentation.

It is estimated that over 600 grape varieties are planted in Spain, however only 20 grape varieties make up 80% of the country’s total wine production.  The white wine grape Airen is the most widely cultivated variety and is known for being low-maintenance and hardy.  Other primary white varieties include Macabeo, Palomino, and Pedro Ximenez. The second most planted grape variety in Spain is the red wine grape Tempranillo.  Together with the popular Garnacha variety, it is used to make the famous full-bodied reds associated with the Rioja and Ribera del Duero regions.  Other commonly planted red grape varieties include Bobal and Monastrell.

The French can be credited with helping to modernize Spanish winemaking. When the destructive vine-killing pest Pyhlloxera arrived in France, many of the French wine-makers immigrated to Spain and settled in the Rioja and Penedes regions.

Spain began producing sparkling wine, Cava, in Catalonia in the late 1800s.  The production of Cava would rival the Champagne region in worldwide production.

Wines from Spain tend to be less well known internationally than French and Italian wines.  Because of this, Spanish wine is often reasonably priced.

Most of Spain’s most famous and popular wines are reds, but the majority of the vineyards are planted with white grapes.