The Story Behind Sweet Wine 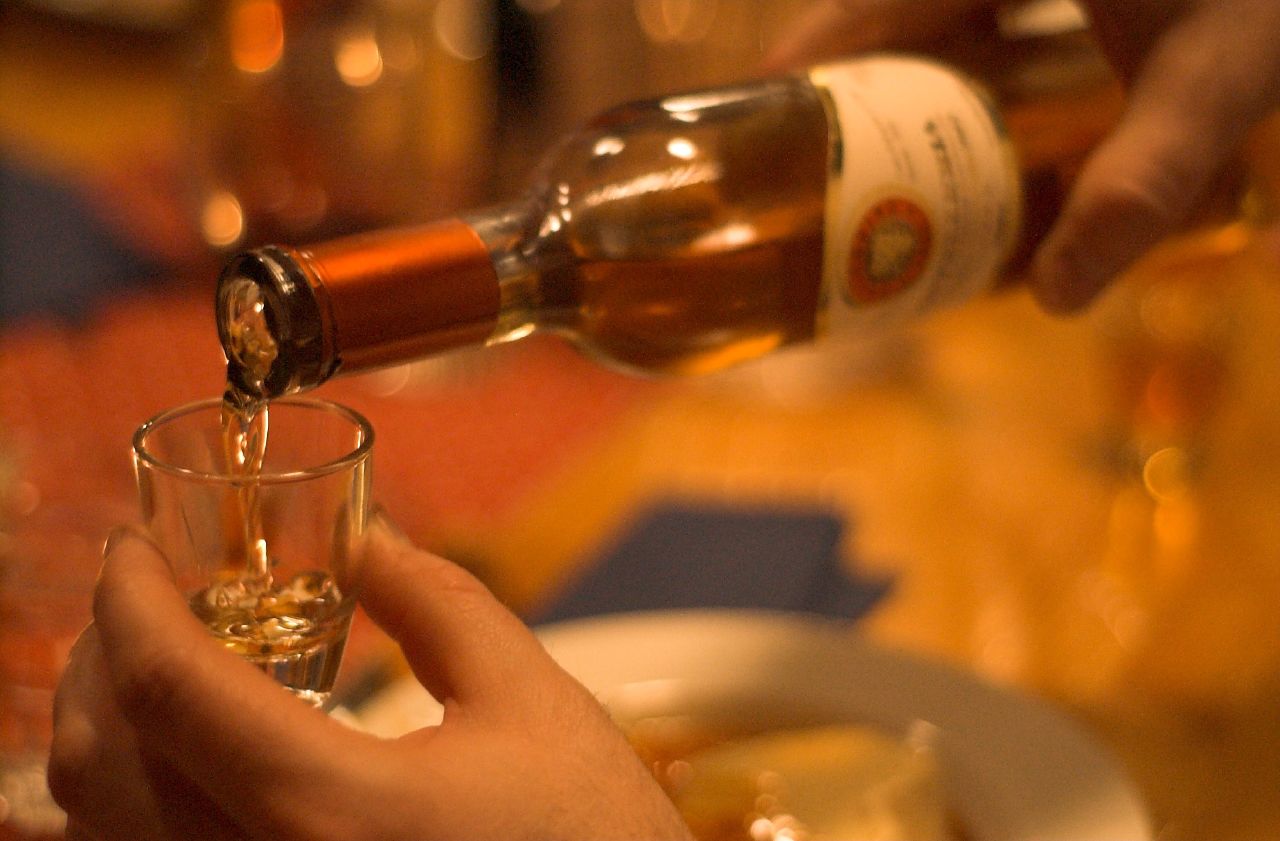 How Sweet It Is

Americans are known to indulge their fondness for sweets. Although consumption of soda and sugary cocktails is high, consumption of dessert wines is at an historic low.

From the 19th century until Prohibition, fortified and other sweet wines dominated US wine production and consumption, in part because of favorable tax laws. As the quality of US dry wines improved in the 20th century, that of sweet wines largely did not and US sweet wines fell from favor. Production of sweet wines in the US in 2005 was 5% of the volume in 1955.

A similar trend exists with imported wines; knowledge and appreciation of fine dry wines has grown, particularly in the last few decades, and as a result, imports and consumption thereof have grown commensurately. And yet, imports of sweet wines have fallen precipitously e.g., Sauterne shipments to the US have fallen by about 2/3 since the 1970s.

Most of the world’s winemaking regions produce both dry and sweet wines.  Hence, there are hundreds of different types of sweet wines in a wide breadth of styles. Historically, sweet wines were most prized because of their sublime tastes and long lives. Before refrigeration and modern technology, one of the ways to increase stability in wine was to increase the sugar content in the grape must.

The amount of residual sugar in wine depends upon the ripeness of grapes and the extent of fermentation in the winemaking. There are essentially four ways to raise sugar levels (excluding those used in sparkling wines).

One is drying the grapes after harvest.  This is often done by tying the grapes on the vines or laying the grapes on straw mats to dry in the sun, or “raisinate,” a technique that dates back to the 8th century.  In Italy, more than 40 different kinds of Passitos (based upon Muscat grapes) are made this way.  In Germany and Austria, Strohwein and Schilfwein, respectively, are made from Zweigelt and Muscat grapes; in the Jura, Vin de Paille from Chardonnay and Savagnin grapes, and in Veneto, a red one, Recioto, from Corvina, Rondinella and Molinara (essentially a sweet Amarone). The Trebbiano and Malvasia grapes used for Vin Santo from Tuscany and Assyrtiko grapes, for Vin Santo from Greece are dried by hanging them in rafters and attics to concentrate the sugars.

Another method is to add neutral spirits to make fortified wines. This added alcohol kills the yeast in the dry wine which subverts fermentation and therefore leaves unfermented grape sugar in the must. The most famous fortified wines, Port and Madeira (from Portugal), Marsala (from Sicily), and Malaga and Sherry (from Spain), are made from indigenous grapes but all have distilled spirits added. Other fortified wines include Vin Doux Naturels from Languedoc Roussillon, made by adding eau de vie to red or white wine, a process (mutage) that dates back to the 13th century. Vin Doux Naturels include Banyuls, Maury Doux, Rasteau and Rivesaltes (all primarily from Grenache grapes), Muscat du Beaume Venise (Muscat) and other Muscats.

The third method uses very ripe grapes, sometimes called Late Harvest grapes.  Because they have a lot of natural sugar, these grapes can be fermented to a high alcohol level and still have residual sugar in the finished product. The yeast does its work - eating the sugar and converting it to alcohol - but then the alcohol level gets too high and the yeast dies before it can finish the conversion. At their simplest, Late Harvest wines (including most made in the US) can be lovely but often lack the deep concentrated flavors of the other methods. A fine exception is Alsatian Vendange Tardive which is typically made from Gewurtztraminer, Pinot Gris, Riesling or Muscat grapes, the best of which are among the greatest dessert wines.

The most extreme example of Late Harvest wine is Eiswein which is produced only in very small quantities because the grapes (typically Riesling or Vidal) must be frozen both when harvested and when pressed. The ice protects the grapes and yields extremely high levels of sugar. This process yields a honeyed, luscious elixir.  Because they are made in northern climates in Austria, Canada, Germany and Switzerland, the grapes also have a very high level of acidity which helps to keep the wines from being cloying. 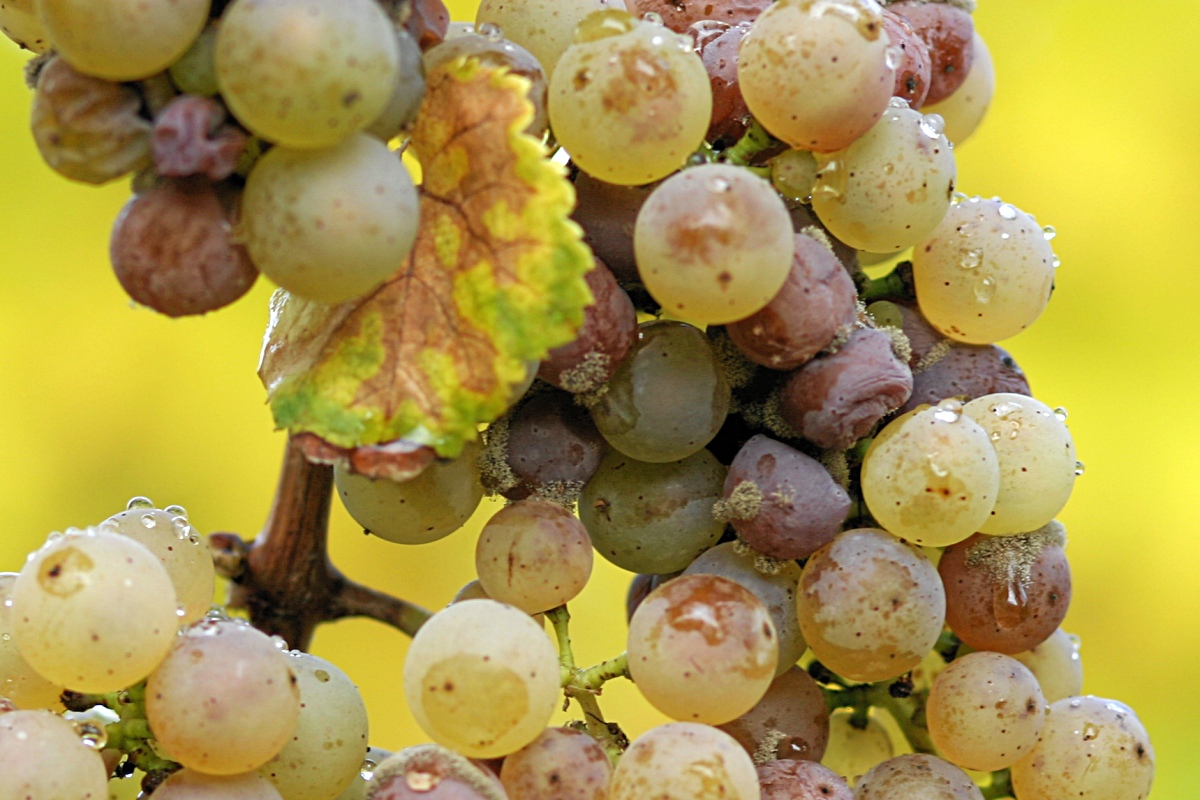 The most highly regarded dessert wines are made using the fourth method, from fully mature grapes that have been affected by Botrytis cinerea (example left), often referred to as "Noble Rot," a fungus that kills yeast and shrivels the grapes into furry raisins thereby concentrating the sugar and adding rich, complex layers of flavor.  Badly-timed, wet weather can result instead in its ignoble rot cousin, "Grey Rot" which can devastate a crop.  The Sauterne and Barsac regions of Bordeaux have ideal conditions, the right balance of rain or dampness, fog and humidity and autumn breezes, for Botrytis development whereas, in other regions, such conditions occur only every few years.

Sauterne and Barsac are made from Sauvignon Blanc for acidity and Sémillon for texture and richness and sometimes, a small amount of Muscadelle. The terroir, the southern part of Graves close to the Garrone and Ciron rivers, is different from the rest of Bordeaux with chalk, limestone, sand, clay and gravel. Wines from Sauterne and Barsac (and, in much smaller quantity, their neighbors, Cadillac and Monbazillac) are gloriously lush with flavors such as honey, honeysuckle, pineapple, tropical fruit, hazelnut, caramel, ginger, quince, and dried fruit. Although drinkable young, high acidity and alcohol levels allow them to age for decades. With age, the color turns from pale gold to amber. Sauterne was the only Bordeaux white wine to be classified among the finest Bordeaux in 1855. (Dry whites made in the Sauterne region may be sold only as White Bordeaux under law). 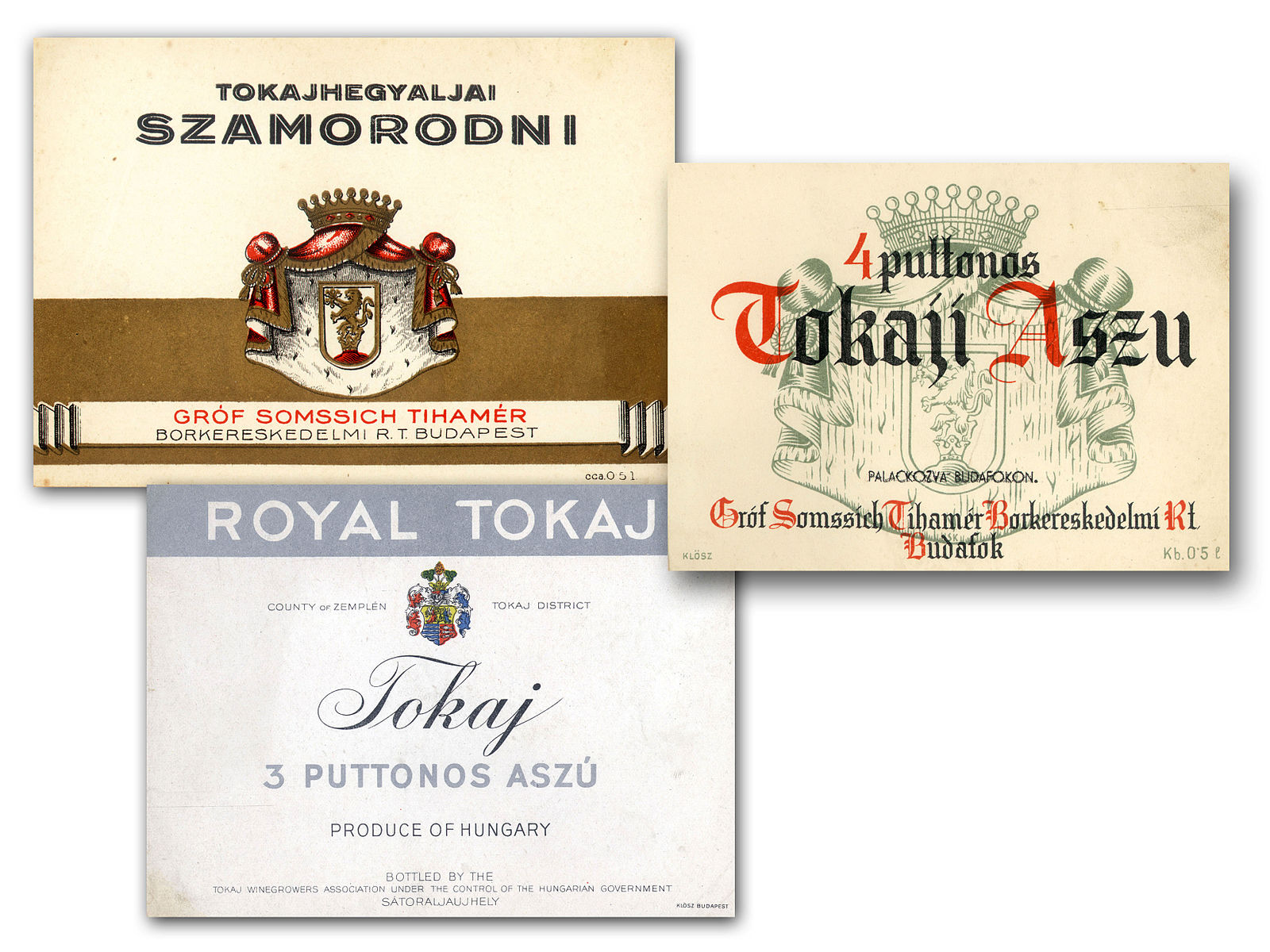 Classified hundreds of years before Sauterne and made near the Carpathian Mountains in northwestern Hungary, Tokaji Aszú was called the “king of wines, the wine of kings” by Louis XV. It is primarily made from Furmint and Hárslevelű grapes but in a different manner than Sauterne and Barsac. The Aszú berries, botrytised grapes, are pressed into a paste and then added to a dry base wine. Tokaji Aszú offers luscious, silky, sweet, ripe, honeyed fruit with minerality from its volcanic soil. During the 40 years under Communist rule, the region deteriorated but new investment since the 1980s has revived the winemaking. Unlike other dessert wines, Tokaji Aszú is rated by sweetness based upon the percentage of Aszú berries – the higher the number of puttonyos, the sweeter. Tokaji Aszú can age for decades or even centuries.

Austrian dessert wines date back to the 16th century. In addition to the Schilfwein and Eiswein described above, Austria is famed for its botrytized wines which are made in the Burgenland. In addition to its exquisite versions of Beerenauslese and Trockenbeerenauslese, the most esteemed and rare Austrian dessert wine is Ausbruch which is made from Chardonnay, Pinot Blanc, Traminer and Welschriesling and is most like Tokaji Aszú.

Sélecion de Grains Nobles is technically considered the highest level of Alsatian Late Harvest wine but is made from grapes affected by Botrytis and is often compared to Trockenbeerenauslese.

Coteaux du Layon, Quarts de Chaume and Bonnezaux can be either late harvest or botrytised wines from the Loire made from Chenin Blanc.  In feudal days, the local Chaume aristocrats reserved one quarter of wine production for itself which naturally was from the best section, hence the name, Quarts de Chaume. The southerly exposure results in very small yield but very high quality, opulent wines - rich in flavor and fruit with good acidity. Like Sauterne, Barsac and the German Rieslings, they age very well. Their color is deep gold with a hint of green and flavors include honey, lemongrass, acacia, candied fruit round with fresh acidity. 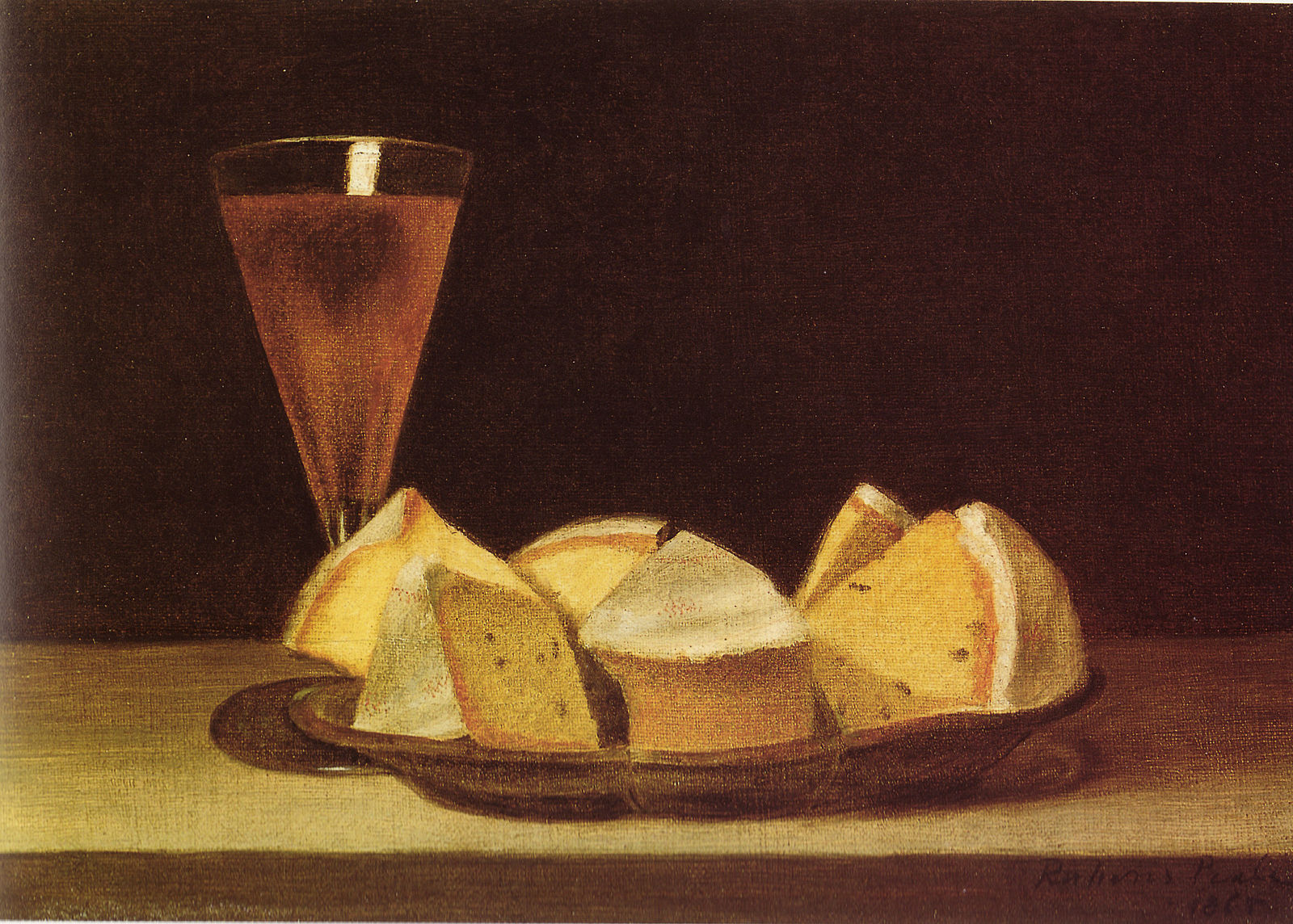 Savory pairings include some classics - foie gras, pâté, blue cheese - and more modern combinations such as lobster or other shellfish, other cheeses, salty ham, roast chicken and spicy food.

Where is the love?

So, why are these amazing, nectar-like wines so underappreciated?  Possible reasons include price, high alcohol content, weight consciousness, less formal dining and contempt.

Sweet wines are expensive because of the risks and meticulous craft involved.  Poor weather can wipe out an entire crop.  Even in good weather, yields are very low because the vines are severely pruned, the berries are hand selected individually during multiple pickings, and sometimes, hand pressed.  To put it into perspective, one Sémillon vine at a top Sauterne estate produces only enough to make one glass of wine vs. one bottle from a Cabernet Sauvignon vine at a top Bordeaux estate.  Thus, Sauterne is the most expensive Bordeaux to make. That said, there are many sweet wines that are available and ready to drink for $15-50, a small fraction of the cost of the indisputably best Sauterne, Chateau d’Yquem.

Dessert wines often have more calories and higher alcohol than many dry wines.  In recent years, many dry wines have had higher alcohol content than historically which, if consumed during dinner, may preclude interest or tolerance for sweet wines after dinner.  It is important to note, however, that, because of their richness, sweet wines are served in small quantities and are sipped rather than quaffed.  Another key factor may be that the average dining experience has become less formal which may obviate the opportunity to enjoy a dessert wine.

Many American wine lovers look down upon sweet wine because of the association with those wines they have grown to disdain such as Blue Nun, Riunite Lambrusco, Boone’s Farm, white Zinfandels and wine coolers and those associated with Skid Row like Moscatel, Thunderbird and Wild Irish Rose.  Those continue to have popular appeal but dessert wines are very different, offering a much more elegant, ethereal experience.

Because they are often sold in half bottles (375ml) and have great stability, sweet wines can be enjoyed over the course of many days and fortified ones, over weeks.  Don’t be swayed by these possible reasons not to drink them.  Drinking dessert wine is pure pleasure. 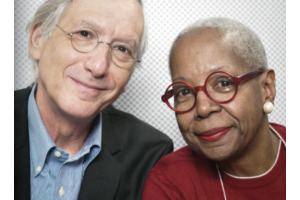