Mead: A Time Before Wine 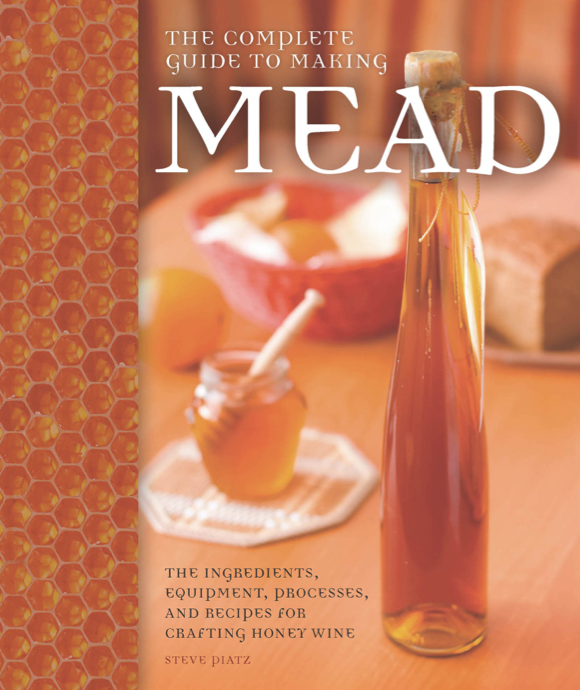 Editor's Note: Steve Piatz is a homebrewer, meadmaker, beer judge, and author whose most recent work is a book titled The Complete Guide To Making Mead. Below, he shares a brief history of grape's predecessor alongside a couple of his favorite recipes and the perfect pairings to introduce you to the ancient wine.

What is mead? The simplest definition is an alcoholic beverage made using honey to provide the majority of the fermentable sugars. To mead makers, a “traditional” mead is made using just honey, water and yeast.

My attraction to meads is in part related to the large palatte of ingredients and techniques that the mead maker uses to craft their beverage from. Not just a diverse selection of honeys but yeasts, fruits, and spices. Then you top that off with some post-fermentation options such as wood aging or treatment with pieces of wood and you can create a very diverse beverage. You can decide that you want to emphasize a black currant aspect of a red wine grape variety by using the grapes and black currants in a mead. You can choose to make your pyment finish dry like the reference red wine or with more sweetness. You can decide to age your mead in a used spirits barrel; yes a mesquite blossom mead aged in a used bourbon barrel does work as a starting point for mixing a mint julep-type of cocktail but you could go further and make the mead with a mint addition and then make it sparkling.

Mead is generally accepted to be the oldest fermented beverage known to man. That makes sense in that honey is the first source of nearly pure sugars known to man. Humans have been hunting for honey for over 8,000 years. Our ancient ancestors likely collected the whole honeycomb from the wild bees because the sweet honey was a valuable foodstuff to the hunter gathers. Collecting the honey from the wild bee hives was probably painful due to all the bee stings. These early humans did not have modern beekeeping techniques, the bees were wild. They didn’t have modern tools and techniques to extract the pure honey from the bee hive, they likely used the whole hive and ate a lot of dead bees while eating the honey. As civilization evolved humans learned beekeeping to provide a ready source of honey. 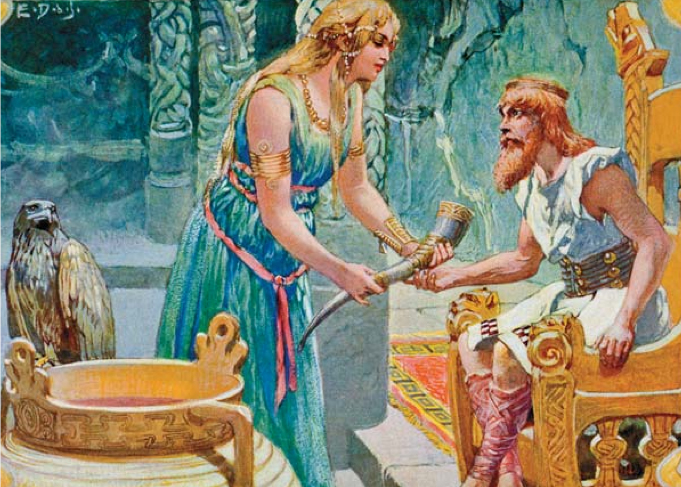 Above: The life source.

Left: Yes, that's likely wine in that horn, but not the wine you typically think of.

In a time before metal utensils one can imagine the ancients eating the bulk of the honey and putting the remaining honeycomb and debris into a leather or pottery vessel to rinse out the remaining sweetness with some water. If left for a few days before drinking it, image their surprise that something magic happened and the resultant beverage had interesting properties. The pieces of the hive and honeycomb along with the dead bees would mostly float to the top and would maybe be skimmed off before drinking this magic elixir.

As far back as 5,000 years ago people in the Egyptian, Greek, and Roman empires made honey wine. People in England made honey wines as early as the Roman invasion of England. There are tales of Vikings making honey wines. However, we know little about what their mead tasted like or how they made their mead. The old English epic poem Beowulf is one of the oldest writings about mead. The work was composed by an anonymous poet and has been dated to between the 8th and 11th century. The poem doesn’t tell us how to make mead.

In most of the world, when you say wine people will assume you mean a fermented, grape-based beverage. Many people will say mead is a wine made with honey as the primary ingredient after water. But if mead is the older beverage shouldn’t the terminology be reversed? Shouldn’t we say wine is a mead-like beverage made with grapes substituted for the honey? Aren’t mulled grape wines just a version of metheglin where the grapes replaced the honey? Aren’t fruit wines just melomels where no honey was used or where other cheaper sugars replaced the honey? Aren’t our hard ciders just cysers where the honey was left out or replaced with cheaper sugars?

For wine drinkers the transition to meads might seem confusing because of the broad range of mead characteristics. Without moving too far from your comfort zone, a wine drinker can try a pyment made with their favorite wine varietal. For a chardonnay drinker try something like a fairly dry tupelo blossom honey and chardonnay pyment. For wine drinker fond of hardy reds try something like a sangiovese pyment. For an alternative to an ice wine try a sweet white wine grape based pyment. An alternative to champagne would be a sparkling mead made from orange blossom honey, it will have the floral character of a citrus orchard in bloom – just like you can pick the dryness of your champagne, you can also target different finishing sweetness levels for the mead. If you are fond of buckwheat pancakes consider a buckwheat honey traditional mead; buckwheat honey is fairly intense but you can moderate that by blending the buckwheat honey with mellower honey such as clover.

Alternatives to fruity reds would include various melomels. Black currants are a wonderful fruit Americans rarely encounter, they are somewhat earthy, musty and acidic. Red currants are softer in character than the blacks but still make a very nice mead. Elderberries are another fruit most Americans are not familiar with though they grow wild over much of North America. Elderberries are sometimes used commercially to impart a generic fruity character to foods and home winemakers sometimes add dried elderberries or even dried elderflowers to their wines. Mulberries are another unusual fruit, the leaves of mulberry tree are the food of the silk worms. The mulberries look something like a blackberry though the fruit is fairly low in acid and can have a slight citrus/grapefruit character. A combination of fruit or even fruits combined with some red wine grapes can results in a pleasant and complex beverage.

Not Mary Anne - Ginger Metheglin Carbonate to around 3.0 volumes of CO2. If you think raw ginger is too intense replace the raw ginger with candied ginger.

Chokeberry Melomel Add the honey to the juice, I had just over a gallon (3.79 l) of juice from processing the berries, and stir to dissolve the honey. Then add treated water to hit the target OG. 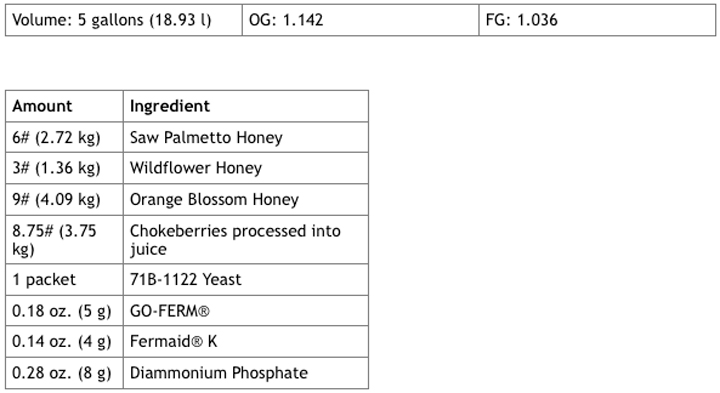 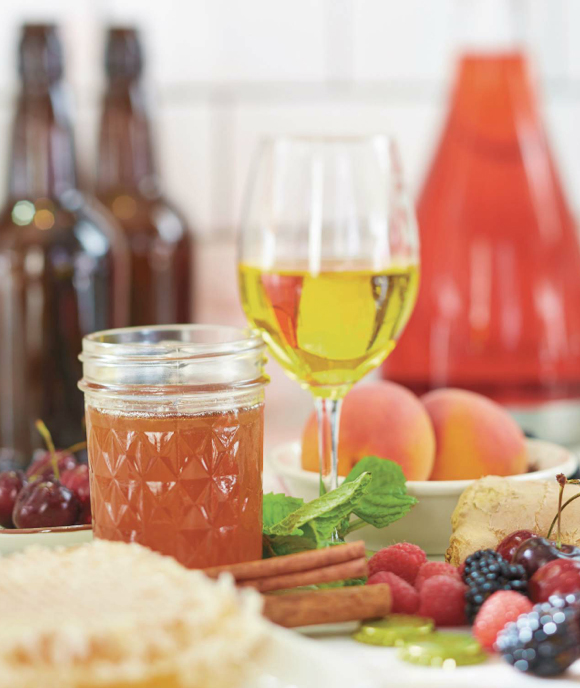 I can’t claim to be an expert on how to pair meads with foods but here are a few ideas for the recipes above. There has been very little experimentation in pairing mead with foods but with the recent growth in commercial meadproduction it is a good time to start the experiments.

Right: Pairings with mead are young, but that only makes it more fun!

Pair a sparkling ginger metheglin with pork roast that was coated with a spicy rub and then smoked and served with barbeque sauce. The strong and sweet ginger character of the Not Mary Anne ginger metheglin will not be overpowered by the spicy pork and the carbonation will help cut through the pork fat.

Pair a chokeberry melomel with a good grilled steak. The chokeberries are very high in tannins and the mead will need to have some residual sweetness to balance out the tannins. The tannins in the mead will be softened by the fat and protein from the beef.

A sparkling tupelo blossom traditional mead can be nice alongside a serving of fish and chips (aka fries). The sparkling aspect helps with the salty character of the fish and the salt that is essential on the chips. The distinctive tupelo character will even come through vs. the traditional English malt vinegar on the chips.

When pairing pyments (melomels using grapes) I would start with foods that work well with the base grape variety used. However, you may need to change the parings because the mead has aspects not present in the varietal wine – things like different sweetness, more or less alcohol, a different tannin level, a different carbonation level, or even different structure. 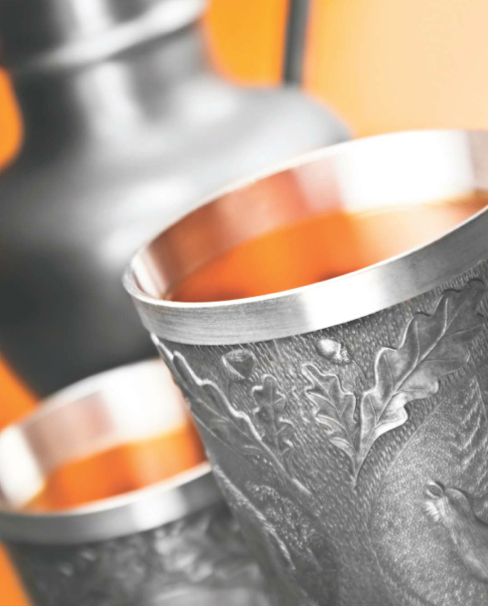 In the past there were drinking horns, mazers and meth cups. The horns were decorated horns of buffalo and other animals used as drinking vessels. The horns are said to have had ceremonial associations. The early shallow wooden drinking vessels were known as mazers, the name supposedly comes from the middle English word for maple. Some say burr maple was the preferred wood for making mazers. The mazer typically has no handles. Some had ornate metal rims while others were just wood. There was also the mether cup, the named derived from the old word for mead – meth. The mether cup was usually four sided on the top but round on the bottom with from one to four handles. The volume ranged from one to three pints.

Left: Mead is even older than the pewter vessels it is seen in here.

*For production details associated with the recipes, and the entire mead experience, be sure to grab Steve Piatz's The Complete Guide To Making Mead, available from the Quarto Bookshop for $24.99.
← Previous Next →