Working in the wine industry, one sees an incredible amount of waste. From excessive use of water inside wineries, to cardboard boxes used for worldwide shipping and consumers tossing their bottles in the trash (and thereby not recycling properly), the industry is responsible for an enormous amount of waste. Considering that vintners will be among the most affected by climate change in the coming years, we should be working as a community to create a more sustainable method of production. Enter organizations offering certification such as the California Sustainable Winegrowing Alliance and educational programs including the Wine Institute’s Sustainable Winegrowing Program. These may seem like newfangled green initiatives adopted to appease a growing market of eco-minded millennials, but in reality these practices have their roots in antiquity.

Ancient Egyptians reduced, reused, and recycled in exemplary fashion, putting today’s standard practices to shame. To reduce the amount of waste on a personal level, Ancient Egyptian masters would send their servants back to the local wine shop with old amphorae for refills in order to save the shop from emptying larger wine containers into newly potted ones. On an industrial level, winemakers and merchants would often reuse old amphorae from a previous vintage, as evidenced by scratched-off, crossed-out and altered labels. The most impressive example of ancient eco-friendly policy was a government-wide program designed to recycle and repurpose the industry’s most wasteful byproduct — the container. 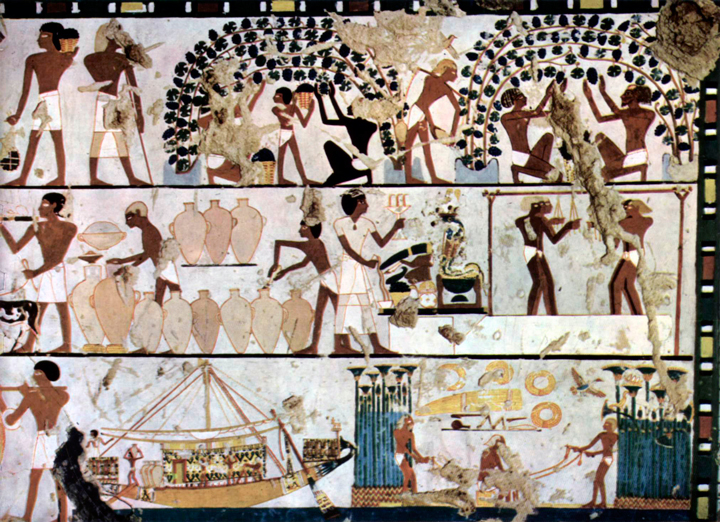 In the fifth century BC, Herodotus observed that great quantities of wine from all over Greece was exported to Egypt at two different times throughout the year. This wine came in earthenware jars that were prized for their nonporous qualities and as such, once the wine was enjoyed and the container drained, one would expect to see these jars all over Egypt. But not a single empty jar was to be found in all of Egypt. This was the result of a government collection program that went to every township in Egypt and gathered the empty earthenware jars. The jars were then sent to Memphis, a large and wealthy city, where they were filled with water. Ultimately the program sent the newly filled jars of water out to the people of the waterless Syrian Desert. This journey of the jar from Greece, to various townships, to Memphis and then to the desert, shows the lengths to which the Ancient Egyptians went to repurpose their wine containers. Something to think about considering that even with what we know about the environmental crisis of today, many people cannot be bothered to walk a few extra feet to a recycling bin.

So when mulling the purchase of your next bottle: consider one of the many producers committed to producing in a greener fashion and try local; and do your best to recycle, reuse or repurpose your bottle. While we must all do what we can on a personal level, real changes must be made in the industrial and governmental spheres as well. Seeing as reducing, reusing and recycling has such a rich history engrained in the wine industry, we should be embracing these new eco-certifications, courses and programs not as a modern phenomenon, but as a return to a timeless tradition of Earth-ly responsibility.

Be sure to check out Emily's YouTube channel, History Of Wine. She has a current video series exploring the history of wine and law, running through September. Choice topics include Swindling, Piracy/Shipwrecks, Taxation/Shipping, Consumer Protection Law and Vineyard/Winery Labor.

Sources Used and Suggestions for Further Reading:
A History of Wine: Great Vintage Wines from The Homeric Age to the Present Day by H. Warner Allen
The Origins and Ancient History of Wine Edited by Patrick E. McGovern, Stuart J. Fleming and Solomon H. Katz
In Vino Veritas Edited by Oswyn Murray and Manuela Tecusan
Wine and Wine Offering in the Religion of Ancient Egypt
Wine and the Vine: An Historical Geography of Viticulture and the Wine Trade by Tim Unwin
← Previous Next →