#FlashbackFriday: En Primeur, or the Ancient Roots of Wine Futures

Today, and for a long time now, many Bordeaux wines are purchased En Primeur, or “in youth.” The system of buying wine futures is especially prevalent among the grands vins of Bordeaux, mainly due to the fact that the wines are best appreciated aged, and the aging process ties up capital. By buying the wines on the futures market, before they are bottled, connoisseurs have the ability to taste the wines directly from the tank and speculate as to how the wines will develop and fluctuate in price. Investing in wine that is still in the tank may seem risky — and if the disclaimers you have to accept in order to even view the investment fund websites are any indication, the stakes are certainly high. But this speculative approach isn't anything new. As it turns out, the Ancient version of purchasing wine futures necessitated even more speculation as wines were bought while the grapes were still on the vine!

In the modern era, once wines are bought, they are aged and then often sold for a profit at auctions years later. This presents an inherent risk, as the buyers could judge the wines poorly and pay too much for them, ruining any chance of profiting from later sale. Unfortunately, this happened in 1997 and the value of the wine actually declined over the following years, losing investors’ money. The futures market does, however, remain alluring to investors. The French investment bank Societe Generale even made a brief foray into the market by creating a financial product whose portfolio uses wines instead of shares. Various other collective investment schemes have taken to the market in hopes of a large profit.

As for the historical precedent? There is record of a vintage from 58 AD being so exemplary that every single grape from the recorded vineyard was bought while it was still on the vine. The income from selling the wine futures of one year was equal to two-thirds the price that the investor paid to purchase the entire vineyard just eight years before. 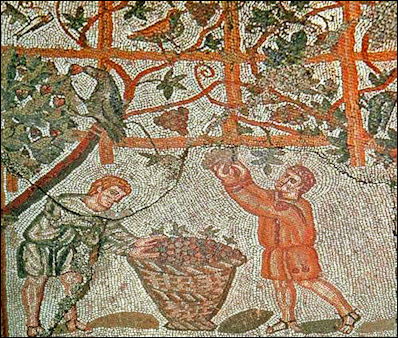 Right: Undoubtedly hoping for a good year with all the investments involved. (FactsandDetails.com)

While this gives us a clear idea of how prevalent on-the-vine wine futures were in Ancient Rome, this is by no means the first mention of the practice. As early as the third century BC, there are references to a law titled, lex vini pendentis, which worked to regulate the purchase of these futures. The existence of this law indicates that this was a popular investment practice, and the details within the laws dictate that the purchaser must remove the wine after the first fermentation had completely died down because the vats and jars would need to be cleaned and prepared for the vintage still months ahead. If the purchaser failed to do so, the winemaker could keep the payment and do with the wine as he pleased. Further confirming that the wine was made onsite before changing hands, the law also stipulated that the purchaser had to leave behind the marc and lees of the wine. This was likely used to make lora, a watered wine used for sustenance by farmhands and domestics.

Perhaps the most interesting detail seen in the examination of this wine is the fact that although grapes were specifically addressed, the law was actually something of a broader agro-investment law and also covered buying olive oil while the olives were still on the branch. So it seems that the practice of buying wine En Primeur that we associate with Bordeaux today was in fact co-opted from the larger agro-industry and adapted to the wine trade based on wine’s value appreciation with age. Although it remains a risk to speculate on the price of wine, at least you know you’re not alone as this has been a custom of the industry for millennia.

Be sure to check out Emily's YouTube channel, History Of Wine. She has a current video series exploring the history of wine and law, running through September. Choice topics include: Laws, Swindling, Shipping and Taxation, Piracy and Shipwrecks.

Sources Used and Suggestions for Further Reading:
Wine and the Vine: An Historic Geography of Viticulture and the Wine Trade by Tim Unwin
Vinum: The Story of Roman Wine
A History of Wine: Great Vintage Wines from the Homeric Age to the Present Day by H. Warner Allen
In Vino Veritas Edited by Oswyn Murray and Manuela Tecusan
The Origins and Ancient History of Wine Edited by Patrick E McGovern, Stuart J Fleming and Solomon H Katz
← Previous Next →