#FlashbackFriday: A Falernian Fraud — Swindled, But Whose Fault Is It?

The wine industry invites swindling. With steep prices and a sealed bottle, every purchase is a high stakes game of chance. But fabricators have defrauded consumers for millennia. Antique taverns routinely mixed wine beyond the view of the consumer, selling it to novice urbanites for above-value prices. As for tricking the elites, each civilization has crafted its own illusions: the Ancient Greeks added powdered marble shavings to heighten viscosity; the Romans added salt to achieve a more complex flavor. Much has been done to containers to misrepresent the age of a wine as well, including breeding spiders for readymade cellar cobwebs which, in seconds, could tack on years to the vintage and hundreds to the price. While laws have been created to stem this unethical manipulation of wine in an effort to protect the consumers, thieves adapt. But ultimately, whose fault is it?

Even with so much swindling going on, people still shell out obscene amounts of money for bottles they have been assured are special. What makes them so special? That depends on your intention for the bottle. Is it a bottle to store away and drink on a special occasion? Is it an investment to be sold for profit at a later date? Is it an ego boost for you to own a bottle that other’s “know” is special? While none of these are excuses to defraud someone, they do present separate scenarios with unique circumstances that lend to misleading practices. 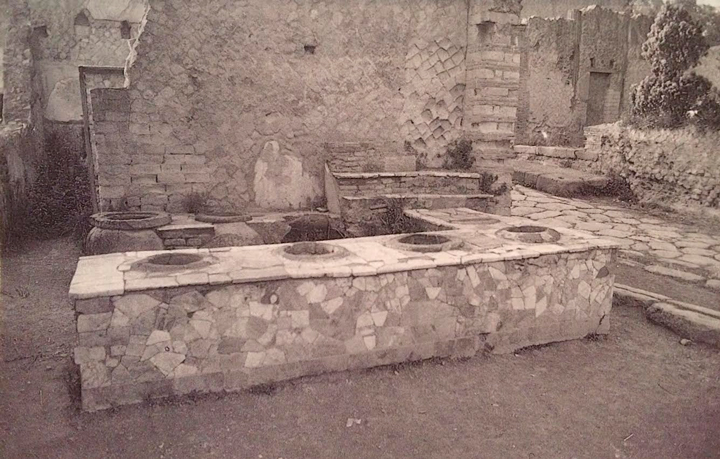 Left: Roman Bar at Ercolano (Herculaneum) Circa 79 AD from Tim Unwin’s Wine and the Vine: An Historical Geography of Viticulture and the Wine Trade. While labels might not been "One Hundred Years Old," fraud has been going on for centuries on centuries.

In any investment, one cannot always be an expert in the field in which they are investing, and it is abhorrent to be misled by trusted advisors. The circumstance of getting an ego boost from owning and/or drinking a bottle you are told is special is quite different. This conundrum brings to mind a scene from Petronius’ first century AD work, Satyricon. Trimalchio, a Roman living in the early Empire, had a dinner party to which he invited fellow Romans he planned to impress. During the meal his servants brought wine up from the cellar that was labeled:

He made a speech about the wine and exclaimed that this is indeed “the good stuff.” Trimalchio made sure that everyone at the party saw and appreciated the gesture of his opening these bottles in their company. He was aiming to impress his guests, as Consul Opimius was the most famous of the desired Ancient Roman Vintages. The label indicated the wine was from the year 121 BC when Opimus was Consul and the vintage was ideal. But he was being swindled. The Falernian wine of Consul Opimius would have never been labeled “One Hundred Years Old.” 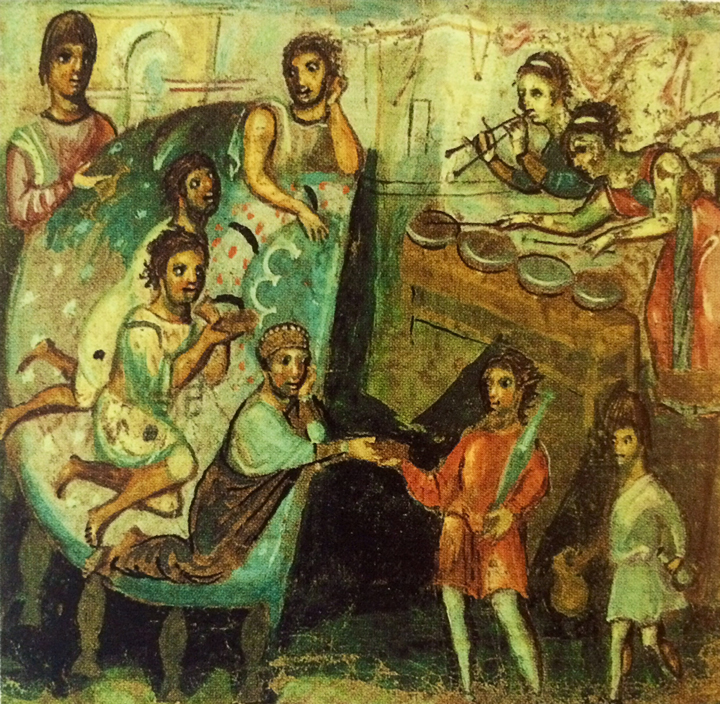 Right: A Roman dining scene known as The Pharaoh's Banquet, featuring a Roman host with his guests enjoying wine with various entertainment to keep them amused, frrom Vinum: The Story of Roman Wine by Stuart J. Fleming.

However, whether Trimalchio knew it was fraudulent or not, it served its purpose. He, the gracious host, had the finest and most coveted vintage wine the civilization would see in centuries. He was able to serve it and appear as elite, wealthy and generous as humanely possible. In addition, if he couldn’t tell it was not actually Consul Opimius, he got to drink and enjoy it, believing it was so. He was never buying a wine; he was buying a label, an experience and cache — and he got all three.

This story may be from the first century, but its message is applicable in today’s society. Although there is no excuse for dishonesty in our industry, when people are gladly paying exorbitant prices to purchase “wines” at a certain level, they should acknowledge the genuine reason behind their purchase.

Be sure to check out Emily's YouTube channel, History Of Wine. She has an upcoming video series exploring the history of wine and law, running through September. Choice topics include Swindling/Adulteration, Piracy/Shipwrecks, Taxation/Shipping, Consumer Protection Law and Vineyard/Winery Labor.

Sources and Suggestions for Further Reading:

A History of Wine: Great Vintage Wines from The Homeric Age to The Present Day by H. Warner Allen

Wine and the Vine: An Historical Geography of Viticulture and the Wine Trade by Tim Unwin