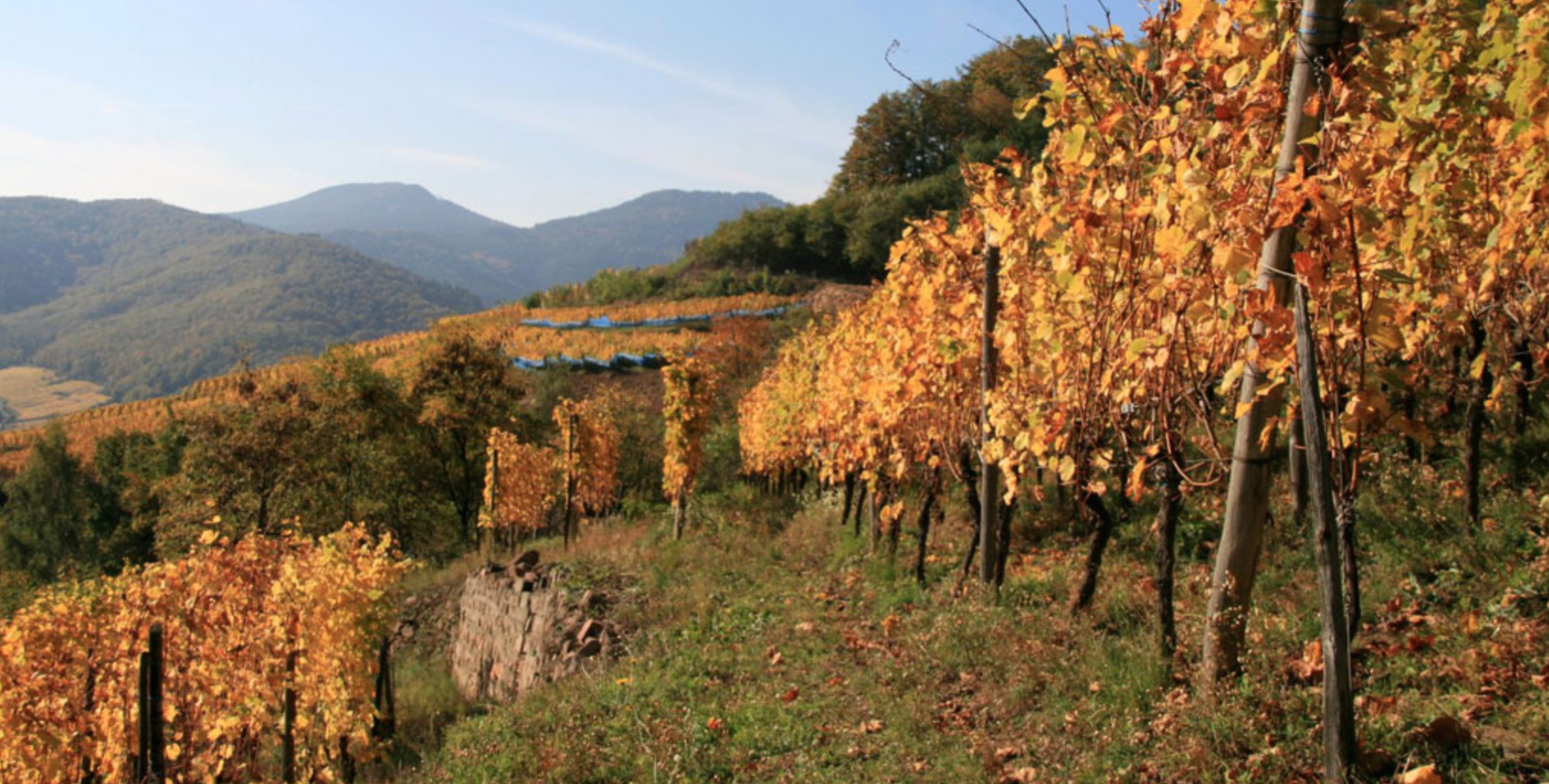 In northwest France between the Vosges Mountains on the west and the Black Forest and Rhine River on the east lies Alsace. For centuries, Alsace experienced frequent political turmoil as hegemony over the region shuttled many times between France and Germany – most recently back to France in 1919 under the Treaty of Versailles. (Germany occupied Alsace during World War II but did not annex it). Regardless of legal authority or political control, Alsace has been a highly regarded wine region since the Romans first planted grapes in 58 BC. 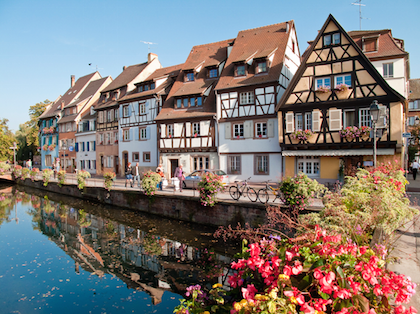 German influence on Alsace is still evident in the local dialect, village names, architecture, cuisine and wine. Wines are made from varietals used extensively in Germany and come in long-necked bottles similar to German ones. Alsace is most famous for its white wines made from Riesling (about 22% of total wine production), Gewürztraminer (19%), Pinot Blanc (21%) and Pinot Gris (15%). Other Alsatian white wine grapes include Muscat, Sylvaner, Auxxerois, Chasselas and Chardonnay. Like German reds, Alsatian red wine is made from Pinot Noir.

All French wine production is governed by Appellation d’Origine Contrôlée (AOC) laws. Approximately 75% of total Alsatian wine production is made under the Alsace AOC. Alsace AOC laws limit production such that any wine called Riesling must be 100% Riesling, any Gewürztraminer, 100% Gewürztraminer, etc. Blends are typically called Edelzwicker, Gentil or Pinot d’Alsace and must have the cépage (mix of grape varietals) set forth on the label. Although primarily white wines, Alsace AOC wines also include dessert wines made from botrytis-affected grapes as well as rosés and reds made from Pinot Noir.

Alsatian sparkling wine called Crémant d’Alsace, a separate AOC designation, constitutes about 20% of total wine production. It is made using the méthode champenoise and is generally a blend of white grapes but like Champagne, may include Pinot Noir. The sparkling rosés are made with Pinot Noir only.

The remaining 4 to 5% of total wine production comes from Grand Cru AOC. The AOC designated 51 southern- and southeastern-facing sites as Grand Cru where the ripest grapes in Alsace grow. The highly-prized AOC Grand Cru wines are long-lived white wines and include Vendange Tardive (meaning "late harvest") and Sélection de Grains Nobles dessert wines. The Vendange Tardive grapes are harvested on one day whereas the Sélection de Grains Nobles grapes mature at different times, are botrytised and are separated at harvest. Chapitalization is prohibited for these Alsatian dessert wines.

Of the dozen wineries based in Béblenheim, a small, charming Alsatian village, Domaine Bott-Geyl is considered its finest. 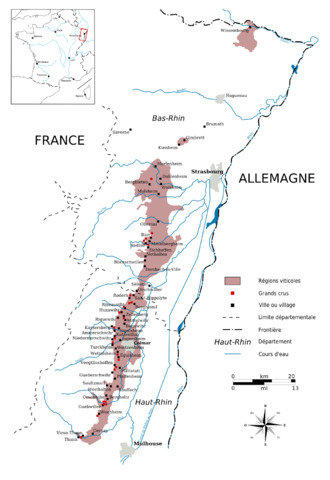 Jean-Martin Geyl first planted vineyards there in 1795. The estate has been controlled by many generations of his family since. It became known as Bott-Geyl in 1953.

Jean-Christoph Bott, one of the latest generation, took over the 15 hectares in 1993 after training in the New World and in Burgundy. The Domaine's vineyards span seven communes from Ribeauvillé to Kientzheim including five Lieux-dits (essentially single vineyards) and six Grands Crus (aggregating five hectares).

Based upon advice from Léonard Humbrecht of Zind-Humbrecht, one of the most celebrated Alsatian winemakers, Bott has implemented organic and biodynamic methods. Instead of using herbicide or other weed killers, Bott controls weeds by hoeing or ploughing and spreading organic compost to restore the health of the soil. He uses tisanes of nettles and osier instead of insecticides. Domaine Bott-Geyl has been certified organic since 2000 and biodynamic since 2002.

Bott plants the vineyards densely which encourages vine roots to grow deeper in search of water and nutrients. He prunes severely in the winter and minimizes vineyard yields. 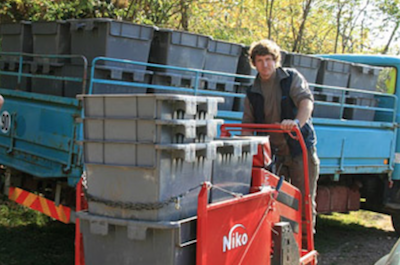 The harvest is done by hand very selectively to avoid inclusion of rot or vegetal or bitter fruit. Complete bunches of grapes are transported to the domain in small, 40kg Champagne caissettes thereby minimizing spoilage. The grapes are then transferred gently into pneumatic presses where they are pressed for six to 18 hours. After three or four days, alcoholic fermentation ensues using the indigenous yeast on the grape skins and proceeds for three to six months.

After fermentation, the wines are racked from the lees. Bott makes his wines with minimal intervention eschewing enzymes and neither chapitalizes nor fines his wines. After bottling, Bott stores the wines for several months (or even years, for the Grand Crus) before release.

Bott-Geyl wines, in addition to being biodynamic and organic, are delicious. Moreover, Bott-Geyl wines are reasonably priced for such high quality.

Les Éléments (made from the lowest vineyards)

Riesling - from 2.45 hectares in Riquewihr, Zellenberg and Ribeauvill ée vineyards with vines ranging from 15 to 40 years of age planted in clay, silt and sandy oils - a natural five-month fermentation was followed by six months aging on the fine lees - can be aged 10 to 12 years. It has fresh citrus and mineral tones and pairs well with trout and other fish, oysters and other seafood, tempura, choucoutre, and tripe. ($16.99 at Sussex Wines & Spirits)

Muscat - a blend of 60% Muscat Ottonel and 40% Muscat d'Alsace from Riquewihr and Béblenheim vineyards - can be aged five to eight years. It has a floral and green apple flavors and pairs well with white asparagus or smoked ham or smoked cheese.

Gewürztraminer - from 2.8 hectares in Béblenheim, Riquewihr, Sigolsheim and Zellenberg with vines ranging from 25 to 50 years planted in silt, limestone, and marl - no fining, chaptalization or acidification - can be aged seven to 10 years. It is fruity and floral with some spice and nutty flavors and pairs with poultry, Asian or other spicy dishes and cheeses. ($23.99 at Appellation Wine & Spirits)

Cremant d'Alsace Paul-Edouard - extra brut - a blend of Pinot Noir, Pinot Blanc and Chardonnay sourced from other growers. After bottling, the wine matures for 24 months before the bottles are disgorged.

Burgreben Riesling - from clay and sandstone in Zellenberg - can be aged up to 12 years - pairs well with ham and other roasted or braised pork, roast fish and Japanese food.

Clos des Trois Chemins Gewürztraminer - from soil with marl, chalk, sandstone and quartzite in Mittelwihr - can be aged 15 to 20 years - pairs well with grilled seafood, curry and other Asian food.

Grafenreben Riesling - from clay and chalk soil in Zellenberg - can be aged up to 15 years - pairs well with sushi, fish terrines and shellfish.

Kronenbourg Riesling - from soil with brown marl, chalk and quartzite rocks in Zellenberg - can be aged up to 15 years - pear and apple aromas and good acidity - pairs well with sushi, fish terrines and shellfish.

Schloesselreben Gewürztraminer - from rocky and marl soil in Béblenheim - can be aged up to 12 years - pairs well with grilled seafood, curry and other Asian food.

Furstentum Pinot Gris - from marl with chalk and sandstone in Kientzheim and Sigolsheim - vineyards with elevation of 350-400m - can be aged 15 years - pairs well with poultry and veal in cream sauces, risotto and even fruit desserts.

Mandelberg Riesling - from chalky soil with magnesium and stones in Béblenheim and Mittelwihr - vineyards face south and southeast with elevation of 220-270m - can be aged 20 to 25 years - pairs well with trout almondine and other fish, scallops and other shellfish and poultry.

Schoenenbourg Riesling - from marl with gypsum and sandstone in Riquewihr and Zellenberg - vineyards face south and southeast with elevation of220-270m - can be aged 20 to 25 years - pairs well with grilled and other fish, scallops and other shellfish and poultry.

Schlossberg Riesling - from soil with sandstone and shale in Kientzheim and Kayserberg - vineyards face south - can be aged 15 to 20 years - pairs well with sushi, sashimi, oysters, and grilled fish.

Sonnenglanz Pinot Gris Vendange Tardive - can be aged 15 to 20 years - pairs well with paté or other charcuterie as well as dried and preserved fruit desserts.

Sporen Riesling - from clay and marl in Riquewihr - vineyards face south and southeast with elevation of 275m - can be aged 15 to 25 years - pairs well with fish and poultry.