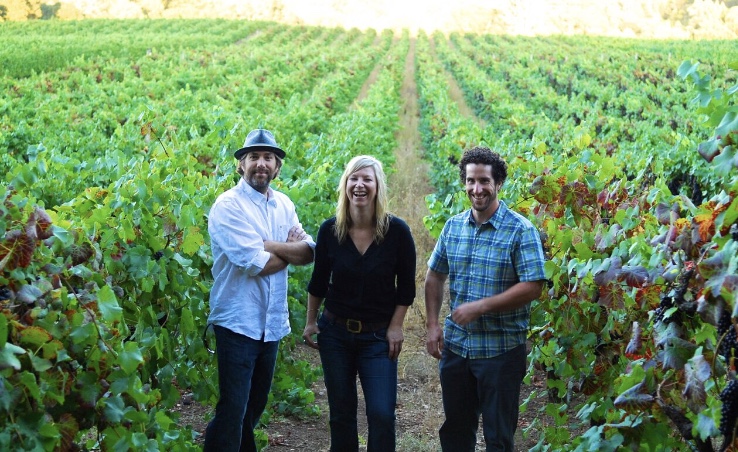 It’s just three weeks after the devastating October wildfires ripped through Northern California and I'm standing in a custom crush winemaking facility in Santa Rosa with Tracy Nielsen of La Pitchoune winery. As a young winery, without its own equipment, all of La Pitchoune’s wines are processed, fermented, aged and bottled in this building. Just one block away is Coffey Park, a neighborhood where close to 1,500 single family homes had been, but was now reduced to ashes, burnt out cars with melted tire rims, a few lone trees and not much else. 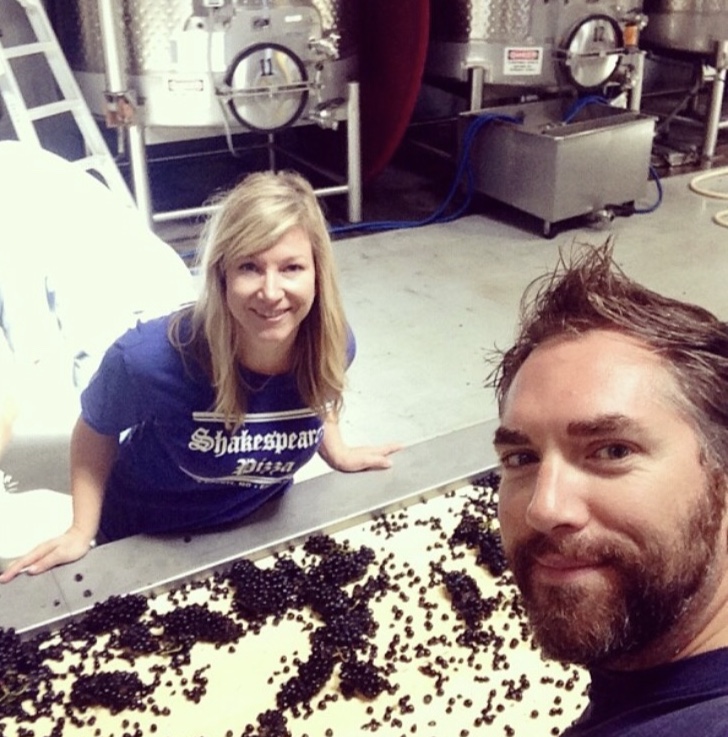 Standing amongst rows of wine-filled barrels, Tracy begins telling me about the day she and Peter, her husband and business partner, returned to the warehouse.“I wasn’t expecting to get so emotional and I just needed a minute to compose myself,” she says. “We live twenty minutes west of here and this is as west as the fire went. If it had gone any further, this building would be gone.”

Tracy and Peter had dreamed of making wine for years. The concept started coming together in 2009 and by 2012 they and winemaker Andrew Berge had produced their first vintage with grapes sourced from several well-known Sonoma vineyards. Since then, La Pitchoune, a Provencal expression meaning “the little one,” has been making quite a big name for itself. The winery has already received numerous accolades and in January of this year, La Pitchoune’s 2014 Chardonnay from Chenoweth Vineyard was named Best of Class in the premium Chardonnay category ($45+) at the San Francisco Chronicle Wine Competition. "To win a medal here – to stand out in a crowd of 7,000-plus submissions – is an enormous accomplishment for a winery." said Esther Mobley, the San Francisco Chronicle wine editor.

La Pitchoune’s name, Tracy explains, "speaks to small production, small lots, and the idea that their small size is their greatest asset." They produce only 1200 cases each year, mostly Pinot Noir and Chardonnay, with small amounts of rosé and as of 2016, a Chenin Blanc, their first venture outside of Sonoma County, made from grapes grown on a small island in the Sacramento River Delta. Rumor has it that the owners of the vineyard are thrilled with La Pitchoune’s version and may even like it better than the one they’re making. 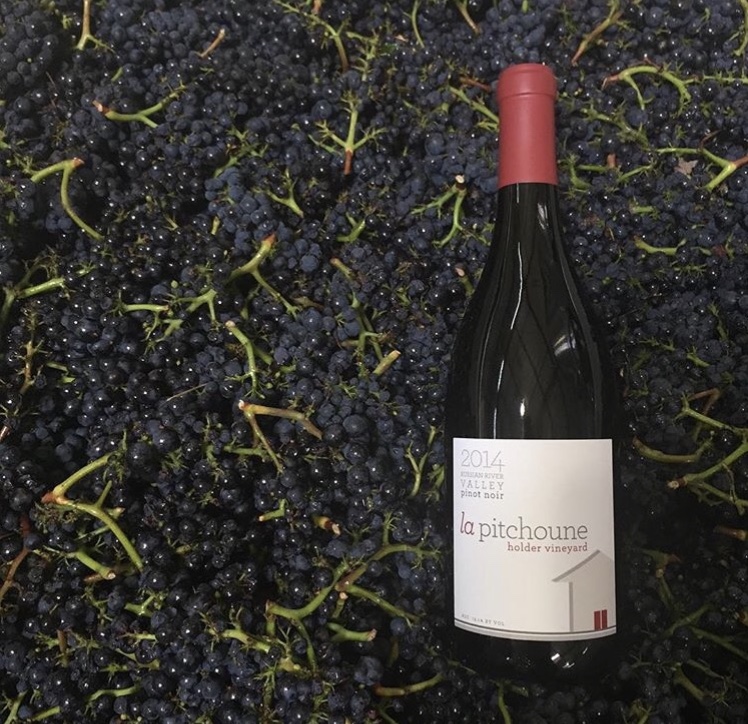 Tasting through the wines I was struck by how light and fresh they were, while, at the same time, showcasing those great California fruit flavors. Each sip was a zesty burst of both savory and fruity elements that continued to linger on my palate, enticing me to take another sip. The Chenin Blanc had a lively, mouthwatering acidity backed up with all these gorgeous tropical notes of lychee, pineapple and passionfruit. The Chardonnays, both young barrel samples and those already bottled, were bright and lively with a creamy mouthfeel. For such young wines, the oak was already so well integrated that it was barely noticeable. I hadn't eaten dinner yet and these wines were making me crave a big slab of meat and we hadn't even gotten to the Pinot Noirs yet!

Tracy then poured a 2014 English Hill Vineyard Pinot Noir from vines that are right on the edge of the Petaluma gap in Sonoma Coast. "The property is completely exposed to wind and fog and the grapes really have to fight to grow," says Tracy. "The ones that make it are tiny and of great quality.” The wine had an earthy, almost mushroomy quality along with lots of blueberry, blackberry and tomato leaf flavors and it was delicious!

"Pinot Noir can be a real in-your-face fruit bomb,” says Tracy. “But that's not the style we're going for. We tend to pick our grapes on the early side to retain that natural acid and give the wine potential to age.” While she hopes the wine will hold up for another 10+ years, Tracy recognizes that most consumers, when they purchase a wine, want to drink it that night so they release their Pinot Noirs a year later than most of their neighbors do. “We’re basically laying it down for them for an extra year,” she notes. “Maybe that’s not the most financially savvy thing to do but it’s the right thing to do because when you’re small and unknown you have one shot to say, 'hey, this is what we’re making and we think it’s fantastic and it’ll blow your socks off.'”

If I had been wearing socks, they would've been blasted across the room by the first sip of their 2014 van der Kamp vineyard Pinot Noir, 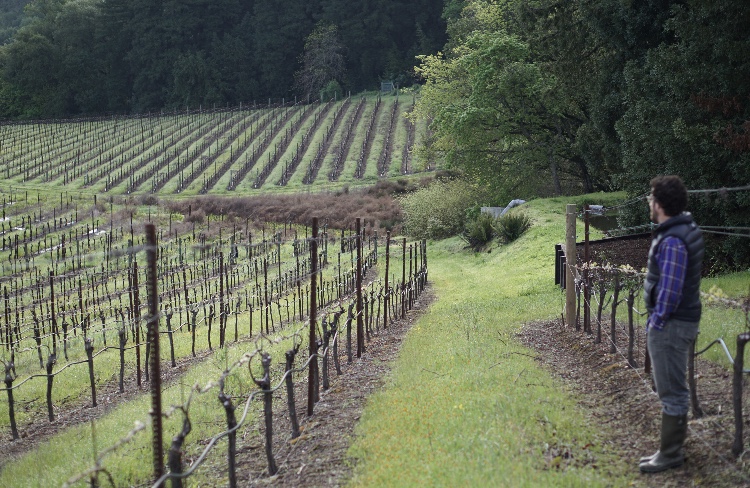 also from the Sonoma Mountain AVA. “It’s a really cool property,” says Tracy, “when you’re up there at 1400 feet you can see the ocean even though you’re still 3 miles away. The soil is rocky and volcanic which gives the wine a lot of earthiness.”

Experimenting with grapes from this one vineyard, they've created two different labels. For one label (a white one) the wine spends 11 months in oak whereas for the other label (black) the wine ages in barrels for an additional year. “It’s the exact same wine from the same tank, released for sale at the same time," explains Tracy. "Yet they will never taste like the same wine. They’re great to bring to a party," she adds, "because someone always likes one and someone else likes the other.” At this point in the tasting, I was dreaming of food and, with the white-labeled van der Kamp, I was imagining a succulent piece of rare-cooked wild salmon baked with lemon and herbs. With the black-labeled Pinot, I could’ve gone for a nice, crispy-skinned Duck à l’Orange with garlic mashed potatoes!

“I like to think that wine tells a story in a glass,” says Tracy. “There should be a beginning, a middle and an end and if there’s a lot of chapters in between, that’s even better. When you pour a glass of wine, your first sip will never taste the same as your last sip, and that’s the best part because it evolves in the bottle and in the glass.” As fate would have it, La Pitchoune had the good fortune to have been just out of harm’s way during the October wildfires and will continue to tell its story in wine glasses years from now. 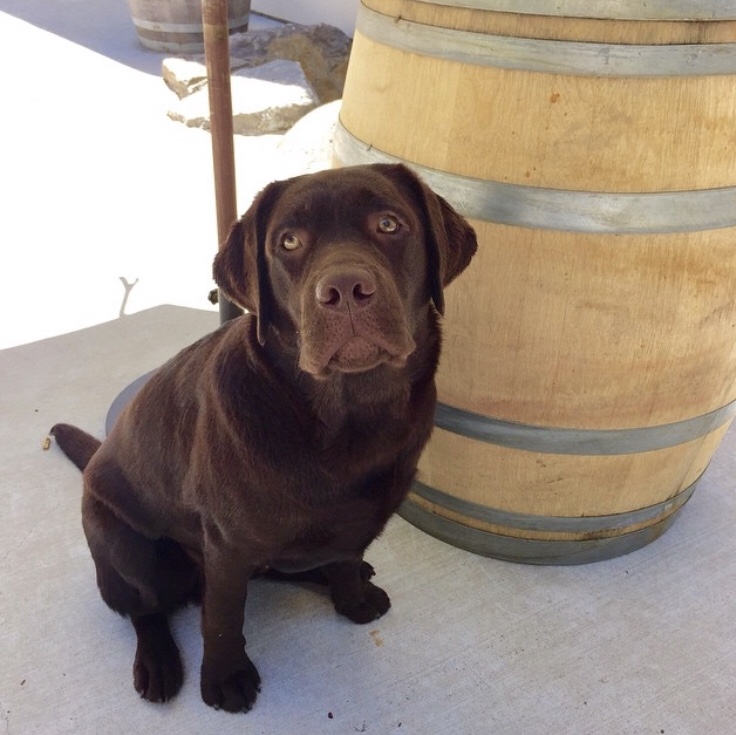 Before I leave, Tracy shows me a map with an overhead shot of where we are standing. “This is the whole Coffey Park that is gone,” she says, pointing out a large area. “There’s one row of homes that protected us. Isn’t that nuts? We’re just a warehouse, it’s not this amazing estate in the middle of a vineyard, but it never looked so beautiful to me.”

George, La Pitchoune's winery dog, is looking forward to a summer of rosé!

La Pitchoune 2016 Chenin Blanc can be purchased at Grape Collective for $22.99.

Read more from Lisa Denning on Grape Collective and The Wine Chef.