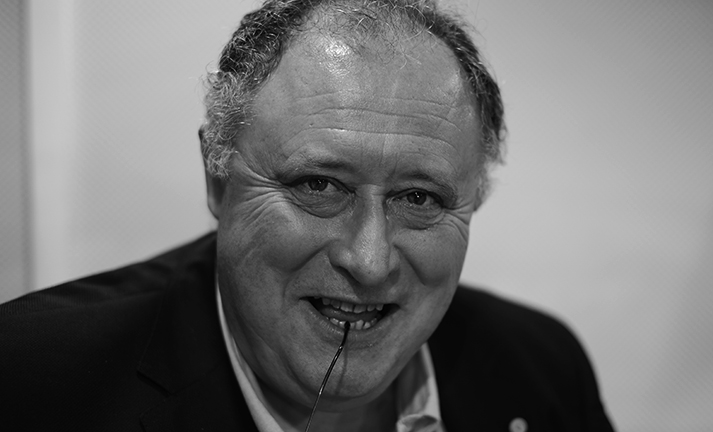 Finca Allende, founded by Miguel Ángel de Gregorio and located in the hill town of Briones in the Rioja Alta, Spain is well known as a top producer in the region.  “Allende” which roughly translates to “further,” is a fitting name as the philosophy of Finca Allende is to go further and further towards creating the perfect terroir-focused Rioja wine. 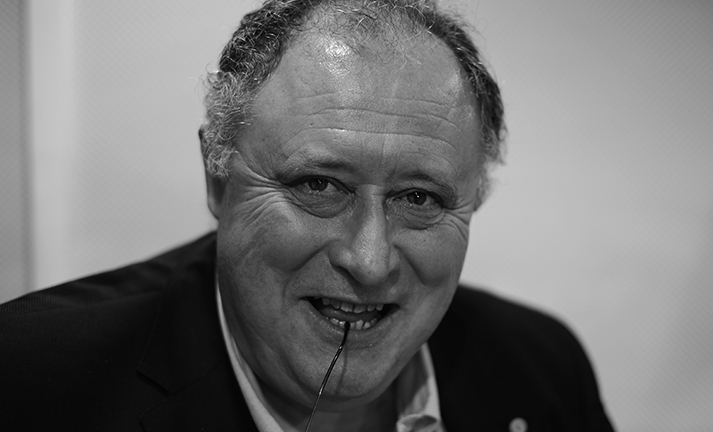 Miguel Ángel is a strong advocate of the concept of terroir, and invented the expression ‘Rioja, la tierra de los mil vinos,’ which translates to ‘Rioja, land of a thousand wines.’

Miguel Ángel talks about the complicated nature of terroir in Rioja with Grape Collective.

Grape Collective: Talk a little bit about the idea of terroir in Rioja.

Miguel Ángel de Gregorio: The story of Rioja is a very singular history. Rioja is a complex territory with a lot of complex terroirs. In approximately 1885, the aphid destroyed the Bordelaise vines. And Bordelaise wine merchants needed wine to sell principally to England. They came to Spain and looked here in Rioja to make Bordeaux style wines.

They also needed a railroad connection to Bordeaux and Haro had a railroad to Bordeaux so they put their buildings there. This was very good for the economy of the region. People learned the technology – the Bordelaise technique of aging the wines -- and people learned the style of blending of wines from different villages, but forgot the singularity of character and uniqueness of the terroir.

I love the character of and differences in every wine – that is the magic of the terroir – and over 25 years ago, I started the Allende project. A lot of risk is associated with this type of philosophy, using only our vines. 2001 is better than 2003 in Rioja, but at Allende, 2002 is better than 2001, for our specific climate. That is the style of our work - to show the singularity of our terroir.

I am an obsessive of terroir. We need to recuperate our idea of terroir. The percentage of terroir wines in Rioja today is .5%. Over 99% are blended. It is a good business in the Haro station. But our option is the singularity of every terroir of every small vine. For example this wine is a white Grenache of only 500 bottles from vines planted in 1947 - this singularity is necessary. 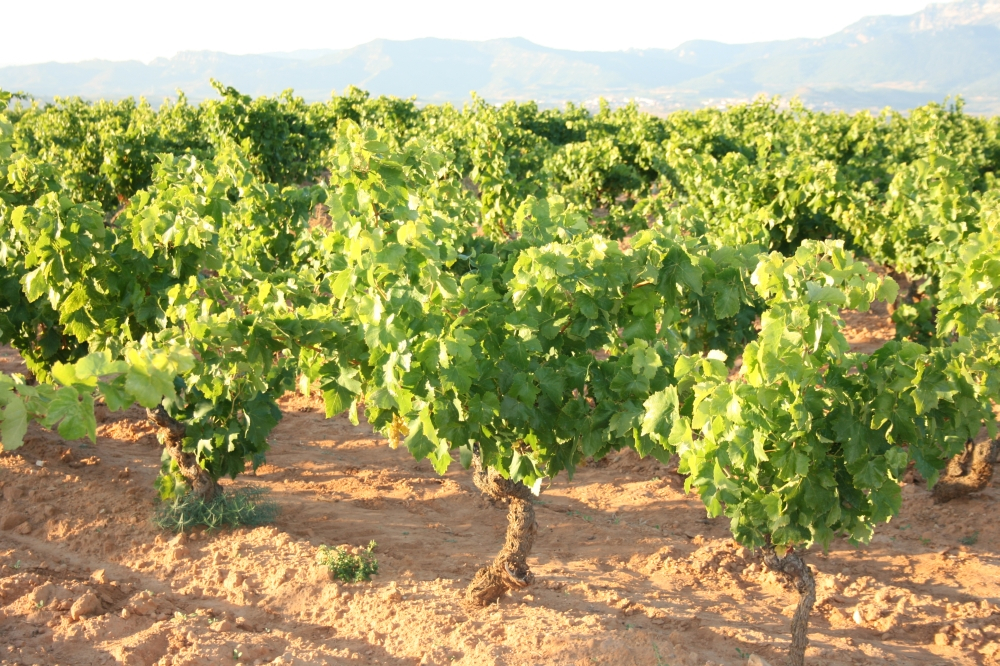 And you fought for the introduction of greater geographical specificity in the labeling of the wines.

Most of Rioja is limestone but Briones is red clay with gravel. Briones is north-oriented and gets Atlantic winds in the north and, therefore, gets more acidity.

It is not discovered by me. It was discovered that in the 19th century and 20th century the cellars of Haro come to Briones for the grapes and wine for the gran reservas. I learn from this. And my idea is only to focus on the terroir wines. I don't want blends. If you look at the wines from Allende, in the middle all of the wines of Allende are black and are not purple or amber when young - never. Black, black, black - it is the iron. It is a singularity of aromas and tannins. This is my decision and it is my obsession.

Can you talk a little bit about the new regulations in Rioja regarding the labeling of wines.

Yes.  It is complicated but in general Spain is a country that makes a lot, a lot of laws and doesn't listen to the laws of the market. To make a good wine you need liberty and not laws.

Today there is a new law to control our work. But to control my work it is necessary to understand my work. If you don't understand my work it is impossible to control this. The people who make terroir wines don't get in the register of the Consejo Regulador. Only the big companies get an inscription for making a single vineyard wine that make wines of terroir of 100 or 200 hectares. Ah, yes very good, single vineyard very good.

The problem of Rioja is 10 companies produce 85% of bottles. These companies have control and want to control what terroir wines are. Probably in 40 years it will change. But at the moment, big companies with 18 million bottles are saying "I am terroir too".

So bureaucracy is supporting the big companies and there is a bit of a sham as they are labeling bottles single vineyard wines when in fact they are not truly single vineyards wines.

It is the same in history. In France in the 60's and 70s Baron Philippe de Rothschild was the biggest and changed the classification of Bordeaux, so Mouton was was second then he became first. Rioja is the same. At the moment any real producer of terroir wines won't have an inscription in the register of the Consejo Regulador, never

Can you describe your background?
I am a viticulturist and my family has been a grape producer for five centuries.  I love the terroir and starting my dreams, and my dream is Finca Allende. 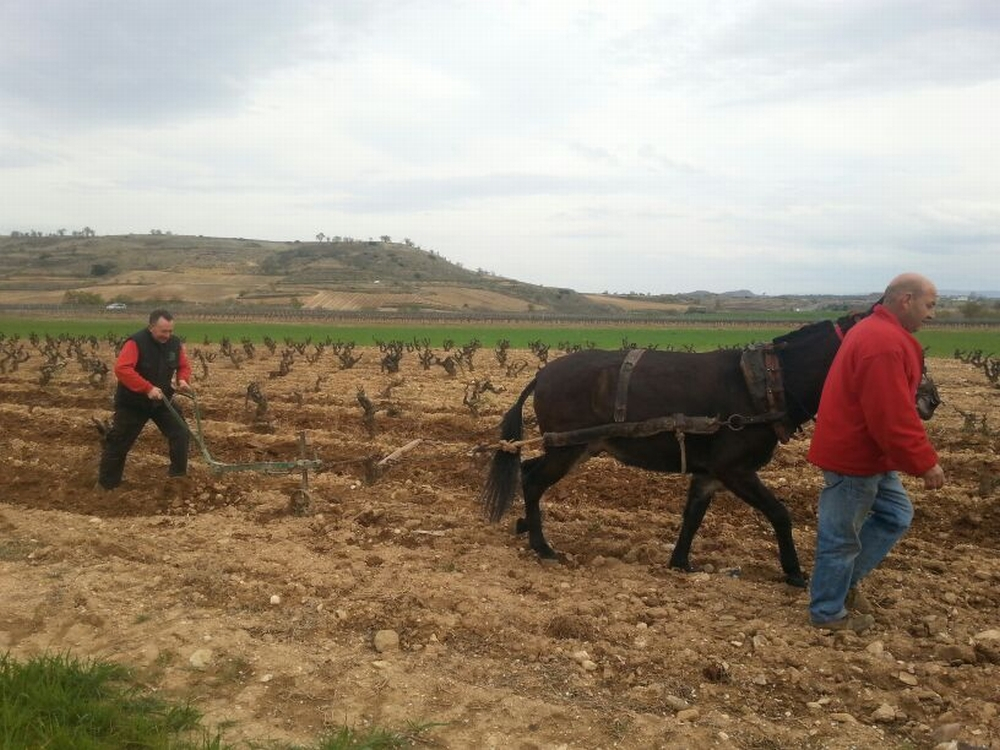 What attracted you to this region?
The region of Rioja is probably one of the best wine culture areas in the world. It has a very complex climate and a very complex terroir.

Rioja Alta has a southeastern Mediterranean influenced climate, and here in Rioja Alta at Finca Allende, we have a very Atlantic climate. The singularity of the terroir is incredible. I say that Rioja is Burgundy territory without Burgundian history.

What makes your wine unique from the other wines in Rioja?
The difference is very simple. The tradition in Rioja after the 19th century is the blending of different grapes from the different villages, blending, blending, and blending, to obtain a homogeneous wine. This is the Rioja “style.” When I started Finca Allende, I didn’t want this kind of winemaking system – this conception about the wine. For us the most important thing is the terroir character.

Allende is probably the only producer in Rioja that works strictly with the concept of terroir – not blending with grapes of the other properties we work with only grapes from our properties. We work with approximately 120 acres of Tempranillo, a small quantity of Garnacha, and a small quantity of Graciano. But we only produce terroir wines, not blended wines like some of the producers. This is unique. 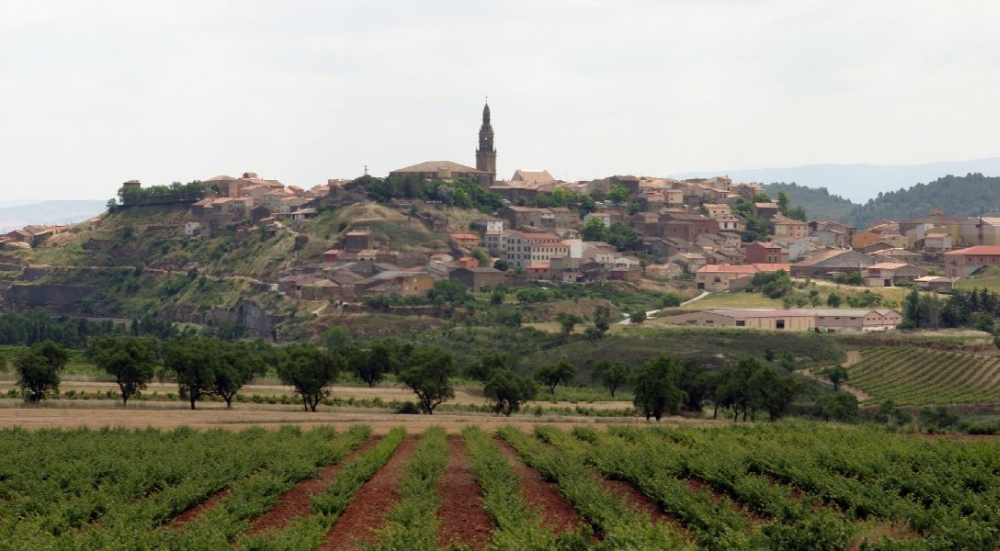 How would you describe your winemaking process?
Our style is very easy, and not complex. The principle work is not in the cellar; the work is at the vines. We work a lot on the vines to obtain the best grapes possible and we work in the cellar so as not to damage the grapes!

We grow 74 hectares in Allende. We make unfiltered and un-fined wines. The wines are black and 20 years later they are black.

We mainly use new oak and 100 percent French oak. 70% are François Frères. This is different from other winemakers of the region. For the tannic and aromatic style, for the minerality of our wines, we only use French oak.

Today we work to make better the vines than the 50's and 60's when there was poor viticulture. We have 14 hectares of our vines only cultivated by mules. In the 70's and 80's we exploited the vines like prostitutes. We need to treat the vines like a girlfriend. We need to give them love. We don't use herbicides never. We use for protection only cooper sulfate only. We don't have certification because we have small parcels and if our neighbors use products we can't get certification. For biodynamics I'm too old, maybe my son is for biodynamics.

This concept is the concept of winemakers by the oenologists, by the oak. Don’t import the precedence of the grape; the importance is only to maintain a constant style.

Every producer has a style, some make a uniform style and the only difference is in the label. They buy grapes in a cooperative, aging in barrels in American oak, put in bottles and label to obtain a uniform product for the supermarkets and they forget the character of the terroir. 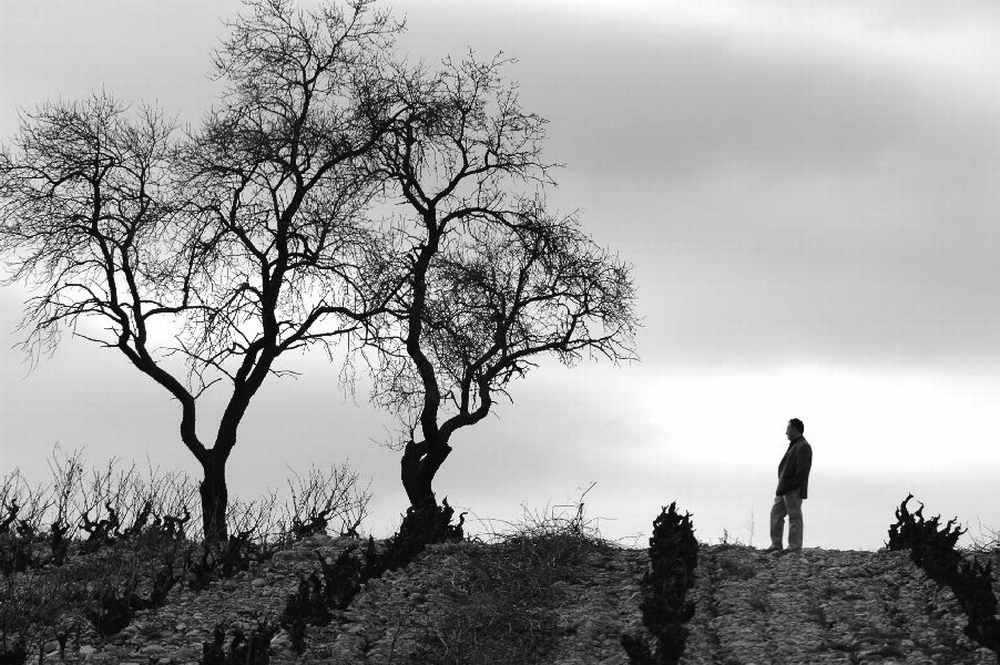 n Allende, we work strictly with the terroir. Every year, we work to make the best wines in the world. Every vintage, every wine is magic and singular. It is the wine of the terroir. If you think this wine, Allende White, is one or two or three white wines of Rioja, ah, I know, a modern producer made this. What this is, is a traditional producer. 1970s white wines are aged as red wines – the same. But the big companies, the wine merchants, they say, ah, white wines are easier to market and say, young wines are not aged in barrels. We are modern style producers, but we make the oldest style.

We age and ferment in French oak. The traditional producers of white wine age in American oak.

When did you start making wine and what were your influences?
When I was three days old, my father took me to the vines. My family has been in viticulture for 500 years. I am lucky; my father is the vine manager of one of the oldest wineries in Rioja. As I finished my studies, I needed to work in the vineyards. 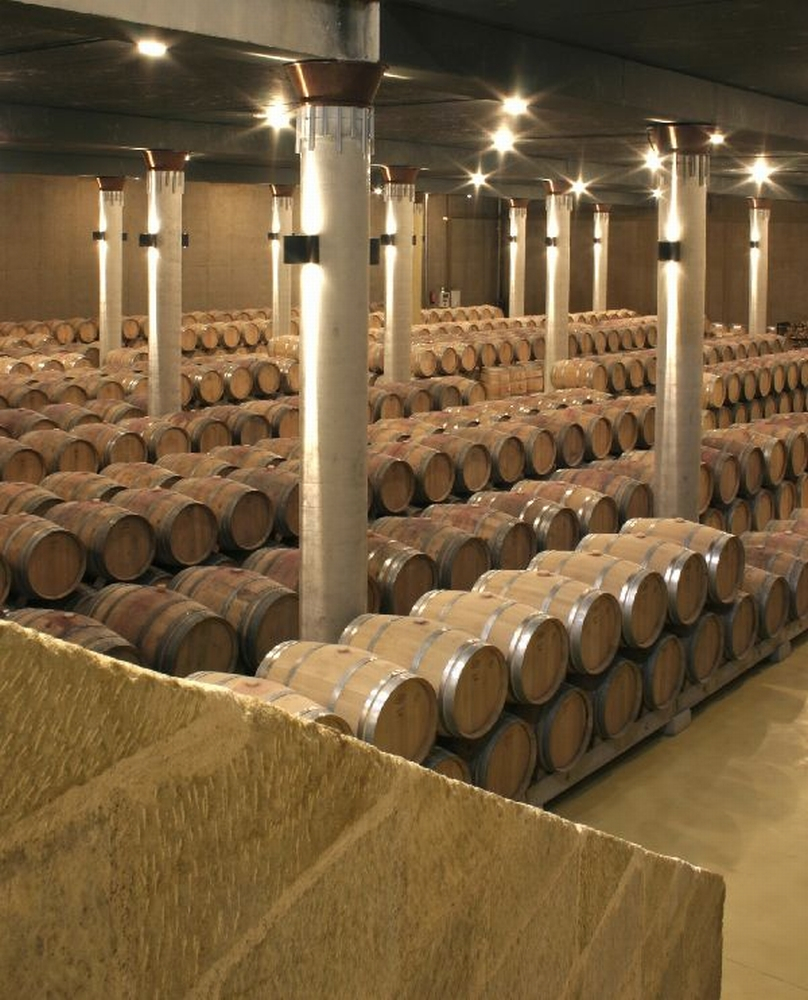 What are you able to learn from other winemaking regions?
The origin of California viticulture is European viticulture – the first plantation was made by Spanish people. California made an evolution and a very intelligent one. I think in all my life, liberty is therapeutic. In the whole world we are very constricted by traditions – all is forbidden.

This is good for regulation. It is impossible to understand the wine today as our grandfathers understood the wines. Every region needs evolution. For the Roman people, their wine was spicy, with cinnamon, spices and heat. Not today. In California an interesting evolution is brewing. It’s a new region and they do not have experience.

The look of California is Cabernet Sauvignon, Merlot, Pinot Noir, Zinfandel and what is important is the label and the barrel time. thirty years ago, what was important was the producer. This is the logical evolution in the development and the knowledge of the production of the wine. California, is a reference as is Burgundy, as is Piedmont, the new technologies - Australia – the new marketing concept. This is not my orientation. But in Australia, I have friends who don’t make marketing wines; they make terroir-style wines and have the same philosophy and it works in Australia.

How do you pair food with wine?
When I go to a restaurant, I first look at the wine menu and choose a wine. If I don’t like the food, I order bread – only bread! I don’t think our wines need to be characterized.

How did you start your vineyard?
It took 22 years to create the property – purchasing small parcels – one after another. It was extremely difficult, but historically with terroirs, you need to wait, work, and study – today it would be impossible to create another Finca Allende.