Robb Report and The Trump Wines Vs Clinton Vineyards Tasting Story - Is Imitation The Highest Form Of Flattery? 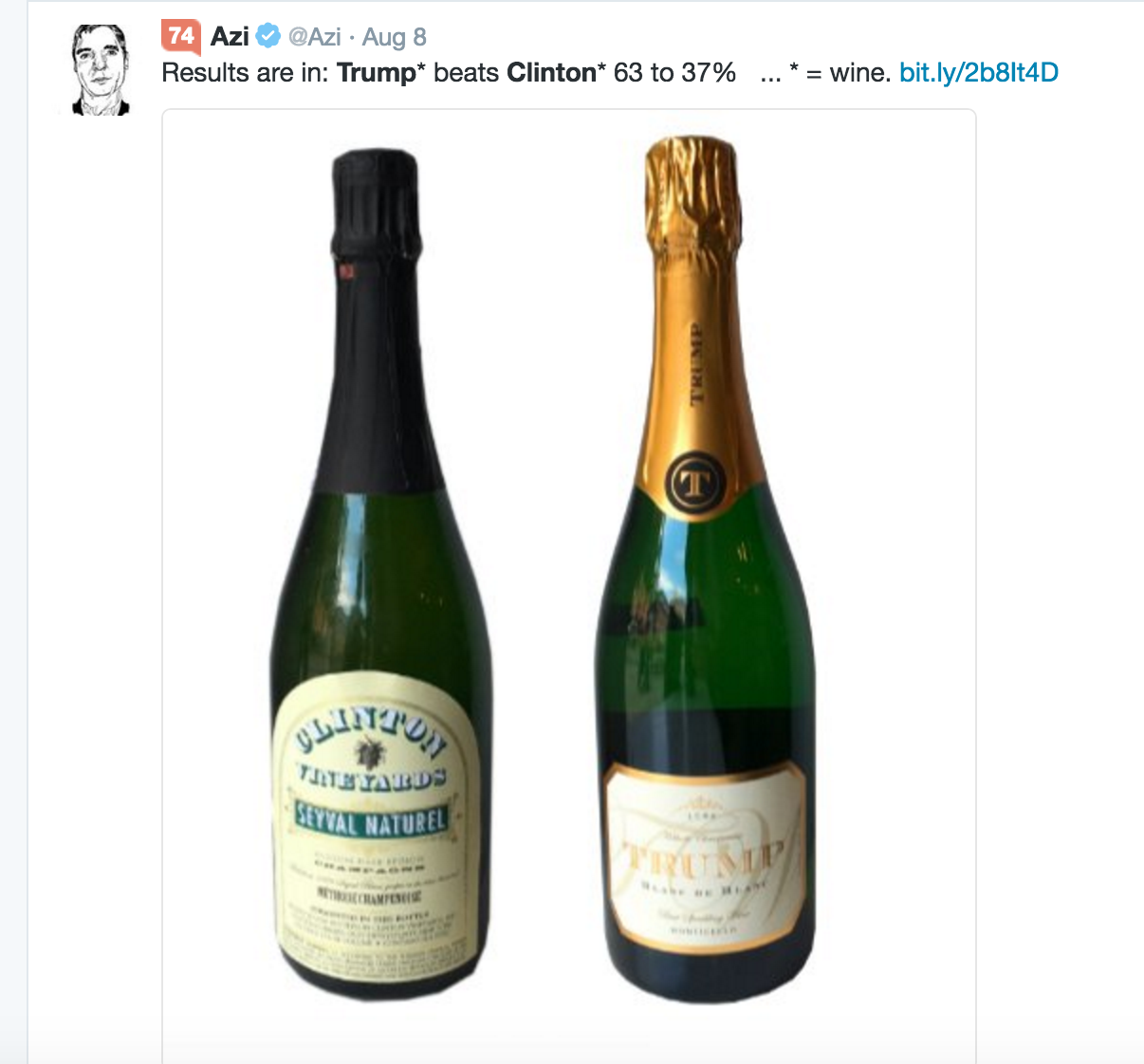 What's the right word for someone who lifts your story, then pitches you on it? That's what happened this week when Grape Collective received an email pitch from publicists for the Robb Report for a story on their site that closely parallels one we ran nearly two months ago.

Note this paragraph in the Robb Report story:

On the Democrat side was Clinton Vineyards. Though the winery, which is based in Hudson Valley, N.Y., has no official affiliation with Bill or Hillary Clinton, owner Phyllis Feder is a great supporter and friend of the Clinton family. In 1993, Clinton Vineyards was served at Bill Clinton’s first inaugural dinner. (Coincidentally, both Trump and Clinton wines were served at Chelsea Clinton’s wedding in 2010).

Compare with the earlier Grape Collective story (the current version of the story contains a correction and is slightly different):

Clinton Vineyards is owned by Phyllis Feder and has no direct relationship to the Clinton family. However Phyllis Feder is described as a “major player in Democrat circles” and the wine was served at the 1992 Democratic Convention in New York.

Interestingly,both wines were served at Chelsea Clinton’s wedding in 2010 (prior to the sale of the Kluge Estate to Trump)

I became aware of the Robb Report story from a mass email I received from Elyse Heckman, Robb Report's director of communication.

Hope all is well! As the world prepares tonight for one of the most controversial and highly-anticipated presidential debates in history, the team at Robb Report – the leading voice in global luxury, recently gathered for a debate of their own. Pitting Trump Winery’s 2015 Chardonnay against Clinton Vineyard’s Victory White 2015 Seyval Blanc in a blind tasting, Robb Report attempted to determine which side of the political spectrum is producing the finer wine.

Representing the Republican side was Trump Winery, owned by the Trump family and run by Donald’s son Eric since 2011. The winery’s 1,300-acre Virginia estate lies just a few miles from Thomas Jefferson’s Monticello, the birthplace of American viticulture. The 2015 Chardonnay is made from 100 percent estate-grown grapes, and has been aged 90 percent in stainless steel and 10 percent in French oak.

On the Democrat side was Clinton Vineyards. Though the winery, which is based in Hudson Valley, N.Y., has no official affiliation with Bill or Hillary Clinton, owner Phyllis Feder is a great supporter and friend of the Clinton family. In 1993, Clinton Vineyards was served at Bill Clinton’s first inaugural dinner. (Coincidentally, both Trump and Clinton wines were served at Chelsea Clinton’s wedding in 2010). And the vineyard holds regular fundraisers for Hillary Clinton’s campaign. The 2015 Seyval Blanc (made from the hybrid Seyval blanc grape, which grows well in cooler climes) draws similarities to a Chardonnay or Sauvignon Blanc for its citrus notes and vibrant fruit aromas

See the results, and get the full story on RobbReport.com!

And of course, let me know if you’re interested in picking up the story, and wishing you an imbibed evening of political commentary.

I responded to this pitch with the following email requesting fair attribution:

Not sure if you know this but you are pitching me on my own story. Some of it is almost word for word the same as an email that was sent on August 6th and includes a mistake (that was later corrected in the Grape Collective online post).

The story was pitched to an extensive media list and was retweeted by Politico reporter Azi Paybarah (see attached).

It would be nice to have proper attribution and a link back to the original story.

Please let me know if you plan to do anything.

In addition I forwarded the email to Robb Report CEO Stephen Colvin's personal email. I have met Colvin a couple of times socially (Colvin was briefly publisher of amNewYork, a publication I co-founded). To date the only response was from Heckman:

Apologies for any confusion, but this was a story by Jackie Caradonio, Robb Report's our Senior Editor after a wine tasting we conducted live this past Friday evening. But I will be sure to relay the message.

Wishing you a lovely evening.

They say imitation is the biggest form of flattery, but somehow it feels a little disappointing that a big media organization like Robb Report couldn’t give us just a little bit of credit for coming up with a fun--if a little goofy--political story.