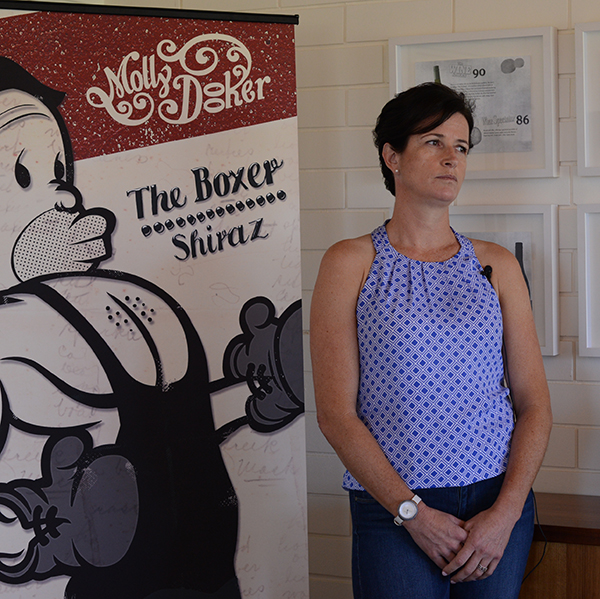 Video interview with Sarah Marquis, who is a co-owner and winemaker of Mollydooker.

Mollydooker winery was started by Sarah and Sparky Marquis in 2005. They have used innovative farming and winemaking techniques to achieve high critic scores. Robert Parker gave the 2006 Velvet Glove Shiraz a 99 point score. Also of distinction is the creative marketing they have employed in building the Mollydooker brand, particularly the colorful and creative packaging of their wine bottles.

Below are excerpts from the interview with Sarah as well as Leigh Gawith, the vineyard manager.

On their viticultural practices:
"My name is Leigh, Sparky and Sarah Marquis are the originators and driving force behind Mollydooker wines. I happen to be Sparky's stepfather, I came to be working with Sparky and Sarah because of my experience in growing and establishing two vineyards in Tasmania. So we had a vineyard and hotel in Tasmania which both sold on the same day. Sparky realized there was a lot of money to be made in bulk wine so the idea was we would contract to buy grapes from growers around the place and turn it into bulk wine - press it off as soon as fermentation was finished and then go skiing for six months - so who wouldn't be attracted to that. Sparky started to teach me about the viticultural program.

What Sparky had been thinking about is the old dogma which came from the classical areas, that the best wines come from old vines, dry grown, low cropping. And Sparky wondered about that and came up with the idea that vines have to be old enough that the vines have developed a root system which is big enough so that they can be able to find their own water and their own nutrients. But we reasoned that if we could deliver the water and the nutrients to the vines than perhaps vine age was not the critical factor. In fact Sparky and Sarah famously showed that was the case because the first 99 point wine they ever made came from 6 year old vines, cropping at four tons to the acre, McLaren Vale of course.

The program means delivering sufficient water to allow the vines to grow to the appropriate size with the appropriate crop level and then by manipulating the water supply they can convert the hormonal balance in the vines from vegetal to fruit ripening - and then later on in the season just before harvest we put lots of water on the vines which keeps the sugar level down which enables the color, flavor and fruit weight to be at the levels that make Mollydooker what it is.

We could be had up for vine abuse. We really make the vines work hard, because we know that we will put a lot of water in the vines late in year, you want that to go into the fruit not into the vegetative - you know new tips, new leaves. When the soil starts to dry out in the beginning or middle of summer we take it to the extreme where the vine has dropped all of its growing points. Tips, laterals and even the lateral buds - and that is necessary so that the vine understands that when we put lots of water later on that it is going to go into the fruit not into more leaves."

On using nitrogen to reduce the Sulfur levels:
"Along our winemaking journey we do a lot of innovative things. We found a lot of people couldn't drink wine because of the sulfur levels. So we experimented and tried to find an antioxidant that would work so we started to use nitrogen in our winemaking process. What we did was develop something called the Mollydooker shake, we open it up, pour a little in the glass, until it is halfway down the neck of the bottle then put the lid back on, turn it upside down, then give it a good shake, turn it right side up, take the lid off, put it back on and give it another good shake (this is demonstrated in the above video). And what you see is on the layer of the wine is the nitrogen - its that foamy layer and what happens is that in the winemaking process the nitrogen gets dissolved into the wine. So we need to shake the wine, to release the nitrogen - and what happens to the flavor is - nitrogen has the effect of flattening the flavor - so when you shake it, it pops the flavor out so it is soft and creamy and more approachable. We found that the low level of sulfites in our wines has allowed people to enjoy our wines a lot more.

When we originated the Mollydooker shake, we came up with this concept because Sparky's sister was a winemaker but she became allergic to sulfur because we use a lot of sulfur in wineries, so she no longer could make wines and couldn't enjoy them. And we often found in our travels that a lot of people couldn't drink red or white wine because of the sulfur levels. So we thought lets come up with a method so that we can reduce the amount of sulfites in the wine. Now you need a certain level of sulfur to protect the wine, but you can also reduce it by using nitrogen in the winemaking. And so by having half the level of sulfites people don't get that allergic reaction that headache feeling and so many more people can enjoy wine.

Their quality control concept, fruit weight:
What we try to do with winemaking is try to make it simple fun, approachable. I always say to people you don't have to be too sophisticated to drink wine. Often I use two words its either yum or yuck so you don't have to think of all of the flavor characters. Over the journey that Sparky and I had we came up with the concept of fruit weight. And what that is, is the intensity of the fruit when you put our wines in your mouth. Now how we measure it is from the tip of the tongue you measure how far back that silky sensation of fruit, that velvet glove, that is what we try to get in our wines, goes back before you experience structure, that is alcohol, acid, tannin.

With our wine making we grade everything in terms of fruit weight. It means that for our $25 wines (which is Boxer Shiraz) it has to land at 65%to 75% fruit weight, if it under 65% we don't bottle it, we sell it and other wineries use it. If it goes to 75% to 85% it goes in our Blue Eyed Boy, which is our Shiraz and it goes 85% back on the palate back and you get these beautiful nuances and layers. Then the next is if it goes 85% to 95 % it goes to Carnival of Love. And then the ultimate wine that we make is, when I said it is our velvet glove experience, we have a wine called Velvet Glove and that is 95% and above. What that does is it is our quality guarantee that means that if you buy Velvet Glove it has to be 95% and above to get into that bottle, if it doesn't it goes into Carnival. That is how we price our wines and we grade them and it makes it so simple and people can really enjoy wines because they look at that intensity on the palate."