Shannon and Paul Brock acquired Silver Thread Vineyards in 2011. Silver Thread is a seven acre vineyard on the east side of Seneca Lake in the Finger Lakes. Paul has degrees in chemical engineering and enology and has previously served as head winemaker at Lamoreaux Landing in the Finger Lakes. Shannon worked for the New York Wine and Culinary Center. The Brocks have followed the path of the prior owner in continuing to use sustainable farming methods in tending to their vines. Silver Thread focuses on dry, European-style wines and their wines are aimed at sophisticated wine drinkers.

We speak to Shannon Brock about her journey into wine, the terroir of the Finger Lakes, and why the region has great potential for serious wines.

Shannon, how did you get involved in the wine business?

When I was about 25 years old I had wine as a pretty serious hobby and my husband became interested in it as well. Mostly because he was coming along with me to wine tastings. We developed a five-year plan of how we were going to switch careers and get involved in the wine business. That involved a lot of overseas travel to check out different wine regions, and we ended up here in the Finger Lakes about 10 years ago for my husband, Paul, to get his masters degree in winemaking at Cornell. After being here for a couple years we really fell in love with the area. We got to know many people here. It's a pretty tight-knit community. It was really easy for us to just stay and put down some roots and three years ago we had the chance to buy Silver Thread Vineyard.

A wine writer who I work with recommended that I visit you and said that you guys were doing some really innovative things. Maybe tell us a little bit about what you're doing here and your philosophy of winemaking.

Before I became general manager and co-owner here at Silver Thread I was involved in wine education, and one of the things I used to always say about the Finger Lakes is it straddles the New World and the Old World; it has elements of both. I think Silver Thread really exemplifies that. We have a very beautiful and special vineyard site here. It sits really close to Seneca Lake on shallow shale, heavy soil. We're able to create very complex, very interesting wines based on that terroir. In that way it has elements of the Old World. Also, with our cool climate, we have wines with great acidity and great complexity of flavor, but, we have definitely a little bit of a New World bent to our winemaking, in that, my husband, Paul is the winemaker and he does have an engineering background and then enology background from Cornell. He definitely brings the scientific angle to it as well. I think what we have to offer is that perfect blend between new and old, science and art. When people taste the wines that really comes through.

Would you say that he has any influence in his winemaking? Are there any other regions that you look through and you say, "Wow, we've been inspired by that?"

Certainly. I think when we're not drinking Finger Lakes wines we really look to Alsace, Germany, Austria, and Northern Italy as models for the general style that we're going for with wines. I think we're reaching the point in the Finger Lakes where we're beyond comparing ourselves to other regions, and we're able to say pretty convincingly that we're making a Finger Lakes style of wine.

Tell us a little bit about the terroir at Silver Thread. What's unique about this environment where you make your wine?

The Finger Lakes has a cool continental climate that's moderated by the Great Lakes first and foremost. Then, once you get within the Finger Lakes region, each lake has its own, I guess you could call it a sub-climate or mesoclimate. Our Silver Thread vineyard is located on the eastern bank of Seneca Lake so we get the afternoon sun. It's on a relatively steep slope for the Finger Lakes region and as a result we get grapes that are among the ripest in the Finger Lakes. A couple of years ago Cornell actually did a study to determine the lake effect, how close your vines have to be to one of these Finger Lakes to actually be getting benefits from the lake itself. Our vineyard here at Silver Thread is close enough to the lake that the entire vineyard receives the benefit of the lake effect. 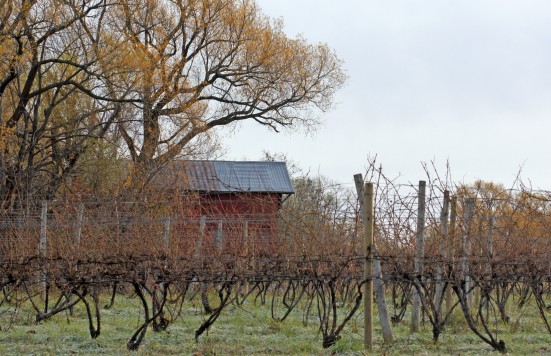 On really cold nights when we get below-zero temperatures there will be a cloud of condensation that forms over the lake, and it's like a blanket that sits over our vineyard. It’s a really well-protected spot. We're regularly in a position of picking our grapes a week, maybe even two weeks ahead of some of the other vineyards in the Finger Lakes because they've been able to achieve ripeness that much sooner, and in a marginal climate like we have that can be a real benefit. The other thing that's special about this site here at Silver Thread is that we have really shallow soil. In general, the closer you get to the lake the more shallow the soil is. A big section of our vineyard has topsoil that's only 12 to 18 inches deep over shale. So, the vines are able to get down and explore that rocky subsoil.

You've been in the Finger Lakes for 10 years. How have the wines evolved over that period of time?

I've seen a huge amount of change. I would say the past five to eight years is when I've seen the biggest change. It used to be that you could say, "Oh, we make some pretty good Rieslings here in the Finger Lakes," but you'd go around and there would be a lot of variation producer to producer. I think we're now at the point where people with an average palate can't even...they all taste good. I think if you're a really well-trained palate there are still some differences to be found between some of the producers, maybe getting more complexity, more depth, more length than some of the others. I think the floor has been raised especially with some of those white varieties.

There's really been a big evolution with the reds as well. Again, it used to be, "Well, in certain years we can make some good reds," but now there are more than a handful of producers who are making really solid red wines every year. I think that's a combination of having a lot more trained winemakers so you have a...I think the generation of people that are running the wineries today versus 20 years ago, there are a lot more people who have traveled the world, doing apprenticeships and achieved some sort of certificate, graduate degree, bachelor's degree in winemaking. It makes a huge difference in the quality of the wines.

Apart from Riesling, what grapes do you think work best here?

We really find the Gewurztraminer very compelling. It's always a tricky one because people who truly love it really love it, but it's not the most marketable wine in the world. With that said, I think for those who do like a Gewurztraminer we have a lot to offer there. I really think we have some exceptional Chardonnay here in the Finger Lakes as well. Back in the '80s there was a huge focus on Chardonnay because that was the most popular wine. It's still the most popular varietal in America, but everyone was drinking Chardonnay in the '80s so a lot of the Finger Lakes growers thought, "Well I'm going to plant Chardonnay because if I want to be a great winery then that's what I need to be making."

As Riesling has gained prominence there's been a lot of backpedaling away from Chardonnay. A lot of wineries not producing it any more or producing it sort of as an afterthought. I feel that we have some really great potential to make some excellent Chardonnays here, cool-climate style Chardonnays, if we put a little more attention into the vineyard and not treat it as an afterthought. Here at Silver Thread we certainly don't do that, but I think some of our neighbors are not giving Chardonnay the credit that it deserves.

Tell us a little about your passion for Riesling.

Here at Silver Thread we consider ourselves first and foremost a Riesling producer. It's very exciting to see, not just ourselves, but a lot of the other producers in the Finger Lakes really devote so much time and energy to exploring different vineyard sites as related to Riesling. Here at Silver Thread we have our own estate-grown Riesling and then we work with three other growers, one on Keuka Lake, one on Seneca Lake, and one on Cayuga Lake. These are growers we use identified that we feel very strongly about their ethics as grape growers, and their success as grape growers. We have long-term relationships with them to buy their Riesling that we bring here to Silver Thread and make into wine.

We do make four vineyard-designated Rieslings and here at our tasting room we offer a flight-style tasting so that people can explore the differences. For people who didn't come to our winery specifically for that tasting, once they choose to do it they typically start off saying, "Well, I'm not really going to be able to taste any difference. They're all Rieslings, is one really a lot sweeter than the other?" I say, "No, they're all dry Rieslings," because we do specialize in that dry style which really allows you to taste the terroir in particular. Most of the time, I'd say 99% of the time, the people are amazed at the differences. Just the different flavors, they're obviously all Riesling, they're all flavors of mineral and different fruits and some savory, herbal qualities, but, people are always amazed at the differences that they can pick out.

I think it's such an exciting time in the Finger Lakes because we're just really beginning to explore the differences that arise from the different locations; the different lakes, the different sides of the lakes, the north end versus the south end, western aspect, eastern aspect. We even work with one vineyard that has a south-eastern aspect. Obviously some of the old regions of Europe have been exploring vineyard sites and using vineyard designations on their bottles for hundreds of years. They've decided on what the great sites are. It's so exciting right now in the Finger Lakes because we're just going down that path. It's just a really exciting time to come and visit and try these wines.