In “Wine Girl,” Victoria James tells a story that is at turns heartbreaking and exhilarating. She grew up in a terrible environment, started working in a diner at 13, fell in love with food and wine, became a certified sommelier at 21 and then saw the worst of the restaurant industry from the inside. Like many of the best wine books, “Wine Girl” is about much more than wine, but also includes a great deal of useful wine information (like why diners default to the second-cheapest bottle on the list and that Americans tend to drink their whites too cold and their reds too warm). Now 29, James is a partner and the beverage director at Cote in New York, where she put together a wine list praised by Michelin when it awarded the restaurant a star in its first year. She is also a cofounder of Wine Empowered, a nonprofit that offers tuition-free wine classes for women and minorities. She talked to us about what she calls the “pale, male and stale” wine community, how the restaurant industry can recover from the pandemic and her surprising answer to what the next hot wine will be. (Answers have been compressed.)

Grape Collective: Wine consumption declined in 2019 for the first time in 25 years. It will likely rise this year because of the pandemic, but what will it take for wine to regain its place, long-term, on the American table? Victoria James: Demystifying wine and the snobbery that surrounds it. That’s still quite prevalent in the industry, unfortunately, and that needs to be done with, once and for all. Wine is an ingredient in a good meal and I think the more we start to recognize that as opposed to this incredibly aristocratic, snobby thing the better.

How will we do that?

It requires more people to get off their high horses and stop putting it on such a pedestal. It’s like music and art – it’s very exciting because there’s so much to learn and it can be incredibly complicated but it doesn’t have to be something that’s so elite. It should belong to everyone, just like music and art.

How will restaurants survive the pandemic? And what is wine’s place in this?

It’s going to be a great challenge. We need a lot of government intervention and support. Twenty years ago, a restaurant was something that was a profitable business and the margins were quite healthy. Now the margins are 5 to 7 percent as a national average. It’s just really hard to make money in restaurants. Rents and the expenses are much higher than they used to be back in the day. You used to be able to open a restaurant on a dollar and a dream. Now, you need a whole corporate structure, and for good reason. Every restaurant should have HR, every restaurant needs to have PR because it’s a very competitive scene. The industry has just gotten much more competitive. We really do need a long-term solution to this enormous problem. Just like airlines can get bailed out, restaurants need some assistance to get back on their feet. But it also requires everyone in the restaurant industry to change restaurants as well. It’s not just the government, it’s us in it.

The wonderful thing about the wine industry is that it is filled with a lot of creative individuals and I think the more we can bring these unique voices to the table the more innovation that can occur, but we really have to band together because it’s probably going to be one of the greatest challenges in the wine market, paired with the tariffs that are still in effect as well.

In your book, you are critical of industrial wines made with a whole cauldron of chemicals. You write that the European Union “authorizes about fifty different ingredients,” including “silica gel (you know, those little packets you sometimes find in dried food with a label that says ‘THROW AWAY DO NOT EAT’).” We worry that so many small wineries are struggling now that we might see more consolidation and therefore more industrial wines. Does that worry you?

It certainly does. With tariffs, these small growers are having a lot of problems because they’ve relied on the U.S. market for a paycheck. The good thing is that with the pandemic I think people are being more aware of what they’re putting into their bodies or what they’re drinking. More so than ever before, we need to ask the questions and figure out what’s in the bottle we’re drinking and enjoying because a lot of these small farmers really do rely on us. It’s just a tiny bit of homework that needs to be done.

When you eat at restaurants anonymously, how is the wine service?

I’ve been consistently disappointed with wine service around the world. It’s probably because of my age and because I look young and the fact that I’m a woman. But I’m also a straight white woman -- I know that some people have it a lot worse. I think the snobbery is still very persistent and the lack of love, honestly. Wine I love because it’s just another way for me to connect with guests.

Do you feel the scandals of the past few years have made any long-term difference in the restaurant industry?

I would say no. Ousting one person as a bad egg doesn’t change the whole system and there is enormous change that needs to happen in terms of racism, sexism, the MeToo movement. The most important thing is now is the time we need to use our voice. Anything that’s happened to them please speak up and use your voice because now is the time when your voice is actually going to be heard.

In your book, you write: “To combat sexism, I hoped to align myself with other women in power. A couple of women in the industry were receptive and did help my growing career. However, too often women were less helpful than men. They viewed me as their competition, following the ‘eat or be eaten’ mentality.” Is that still the case and can you talk more about that? Dottie has said at public forums that she has heard from Black women that they have been helped more by White men, and White women at these forums have scoffed at that.

You can never argue with another person’s experiences. When women come to me with their stories, I try to just listen to what they’re saying. It would be repulsive if I said oh that never happens, that’s impossible, I don’t believe that. You should listen. I’ve had some great female mentors, but I’ve had a lot of women who have been incredibly cruel and vindictive and we’re sort of pitted against each other, so I think that part of the industry needs to change as well.

Your restaurant has a zero-tolerance policy for abusive behavior by customers toward the staff (as well as staff toward each other, of course). All restaurants should obviously follow that lead. How can you enforce that when everybody’s a critic and anyone can criticize you on Yelp?

There has to be due process. Everything is investigated thoroughly. Everywhere there are customers there are cameras so everything is very clear. We just don’t ban someone from the restaurant for he said-she said. It’s when there’s a clear harassment. It makes our team feel safe. We have so many amazing, wonderful guests who come into our room that we’re not concerned about a few people slandering us when a majority of people know what we stand for and are on our side. 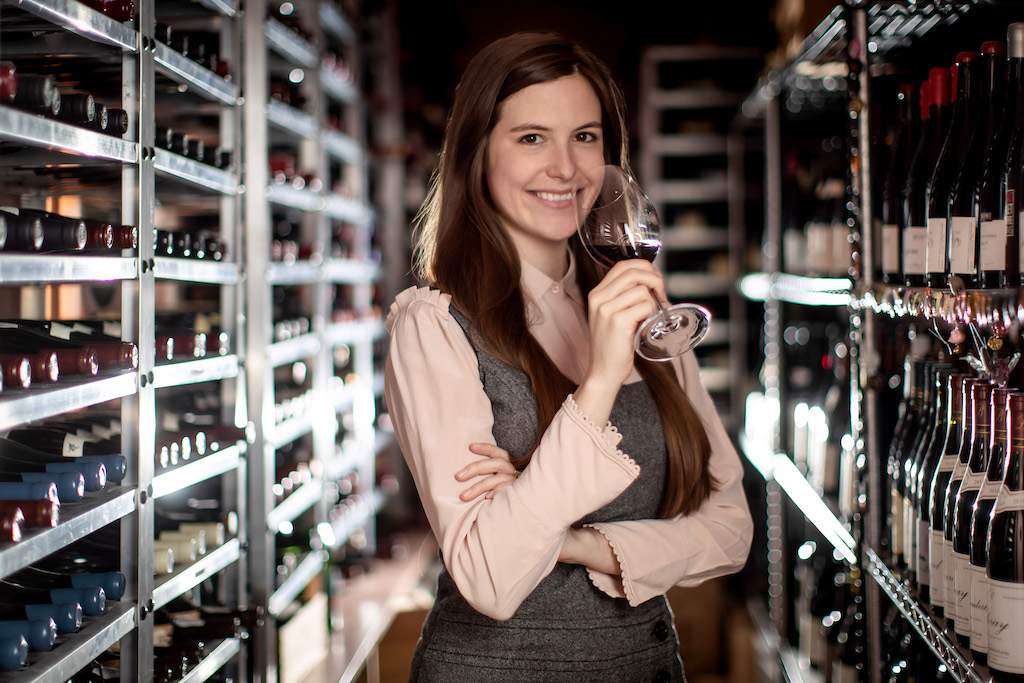 We’re constantly searching for comfort during these times. These are very scary times. I think that more than a specific wine or a specific place, people will start to search for wine that has meaning to them, that brings them comfort, wines that have a sense of place and purpose, wines that speak to them, that mean something. And I think it’s so funny in the food world people will go way out of their way to have this artisanal special grass-fed beef but then they’ll just buy kind of any sort of chemical concoction for wine. More than anything I think people are going to be searching for meaning and for quality in wine.

Tell us a little about Wine Empowered.

We started classes this year. I wanted to create a safe space where people who are consistently on the margins of this wine society are brought in and they feel at home. It’s such a beautiful thing to be in a room full of people who are this curious and whip smart and hungry but previously hadn’t been welcomed into this world. And I think the more of these classes we can host and the more people can graduate into the wine world, the wine world is just going to skyrocket and be an incredible place where so much innovation can occur and talent can blossom. That’s our dream and I know it’s the dream of many others in the wine world as well.