Aaron Epstein is the founder of Le Metro Wine a progressive San Diego based wine club that endeavors to source unusual wines and complement the wines with stories and illustrations. Epstein is a recent San Diego transplant having spent most of his career working in the wine business in New York City.

Christopher Barnes: Aaron, you're not originally from San Diego?

Aaron Epstein: I moved here from New York in 2012; it'll be three years this summer.

Tell us a little bit about San Diego wine. You've become part of the wine scene here in San Diego in a very short period of time, it's almost like it's an area that people are starting to really pay attention to, where interesting things are happening.

It's definitely an exciting time to be in San Diego if you're into food or wine or beer or any of these things. Really since we've got to town we've seen this explosion. It was absolutely starting to happen when I moved to town. We moved here mostly for family reasons, but I also just had this awareness that San Diego ... The rumbling was just starting to happen. I think, in a lot of ways, San Diego is a city that, especially talking about the restaurant culture, has been trying to establish it's own identity as separate from Los Angeles, which is how much of the rest of the country views us. It's been really thrilling to watch it's start to happen.

How did you decide to start Le Metro Wines?

Honestly, Le Metro represents a culmination of a number of ideas that I've had over the years, just about how to make wine resonate with normal people, normal wine drinkers. Smart people who don't spend all day reading wine blogs, who don't follow lots of wine makers on Instagram, but who truly want to learn about what they're drinking. A lot of people visit wineries when they're on vacation or they're on their honeymoon or whatever, and they establish this really strong connection with wine from a certain place. I've always sought a way to help people establish that connection with wines from a place that maybe they haven't been.

There are a lot of different aspects to it, and it's a very dynamic project because we're constantly trying to adapt to what we see working. We want people to be really excited, frankly even when they find a wine that they don't like. We want them to have something to relate to. 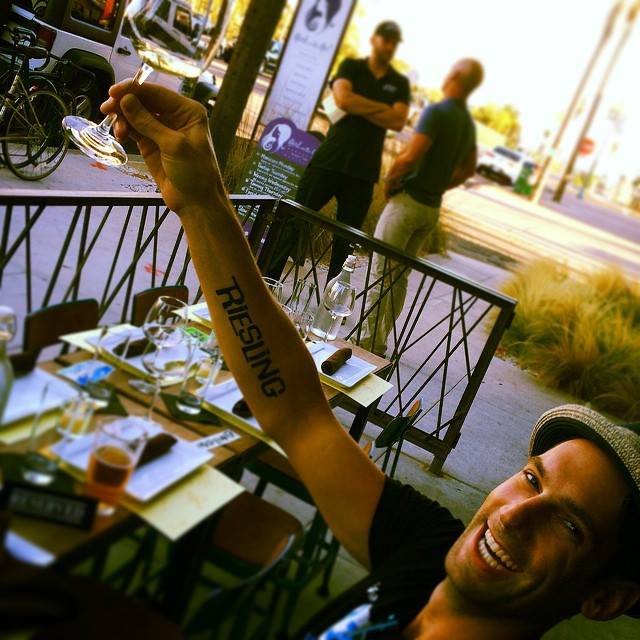 What's going on in San Diego with the wine scene here. We're in the Vesper wine making facilities here, and obviously they're doing some interesting things. Tell us little bit about that.

I mentioned how exciting it is to be here, and I think earlier I was talking more about the wine sales scene, the restaurant side of things. What has happened in the almost three years I've been here is just extraordinary. You have urban wineries popping up all over, some of which seem to be focused on the local market, which is really great. It's getting people out and drinking wine with the people who are producing it. Some of which, like Vesper, are absolutely making world class wine and being recognized for it. There are people who fly a bit more under the radar as well, such as J. Brix - they actually work out of this facility as well, although they don't pour the wines in the tasting room. Their fruit is primarily coming from Santa Barbara, but they're San Diegans and they're making it here, and it's just tremendous.

How many people do you think are making serious wine in San Diego at the moment?

A lot more than there were when I got to town. I don't even know if that's fair, they're certainly more accessible now then when I got to town. I don't know that I need more than my hands to count them, but I think I might need both hands at this point. Everybody has their own path to wine, as I'm sure you interview all kinds of people. I think a lot of people who have probably been making wine for far longer than I've been here, who were doing it for much more personal reasons, they're learning. As they learn they're getting more interested and sharing it with a broader audience, and the wines are getting better, they're getting cleaner, they're getting more accessible. Frankly, from my angle I think that's what's happening with wine marketing over the past three to five years. It's just a game changer - you can make wine in the garage in San Diego and sell it in New York.

Tell us what you think is unique about San Diego County, from a wine perspective. What wines are doing well here?

It's something that I don't know if the San Diego wine makers would say as frankly as I do, because again I'm not involved in making it, I'm involved in selling the story of it. San Diego is it's own most difficult market, because in San Diego the one things that truly stands out is beer. There are incredible risks being taken with the beer culture here, and the wine making is slowly starting to catch up. I think people have been frightened to make wine that maybe really expresses San Diego, because the San Diego market has been historically more interested in wines that express what's going on in Northern California.

Talk a little bit about those wines, the wines that express San Diego.

I believe that the wines that are expressing San Diego best are wines that express it's history. I come at that from a purely narrative standpoint, because that's how my head works. In the case of Vesper Vineyards, Chris is trying to dry farm as much as possible, he's trying to really express this soil that has in fact seen great cultivation, longer than anywhere else in California. I know you're going to speak with the guys from Los Pilares and Michael is just fascinated by the vineyard history, the historic grapes. He's working with Muscat. The thing that most resonates with me when I hear him talk about it is when he references the history. People don't realize this was the first part of California to be settled, and it was the first part of California where grapes were planted.

What do you think has to happen for San Diego to be part of the conversation in terms of wine regions? If you ask somebody to name five wine regions in California, San Diego probably isn't one of the ones that are mentioned right now.

Honestly, I think it is happening. I guess the question is what is needed, more than anything else I would say patience. I think this is the glory of San Diego, is that nobody is in a hurry. You can apply that to almost any situation; you have a lot of very focused, hardworking people who also make sure that they enjoy their lives. Things are happening, they're happening slowly. I believe, and again this is from my angle, that it's really starting with the restaurants, because you need a platform. In San Diego restaurants, like Juniper and Ivy, they get attention for the design work, for the food, for the wine, for the narrative, for the whole picture. It allows Tammy, who happens to have the best palate in town, to really showcase wines that otherwise people wouldn't order. 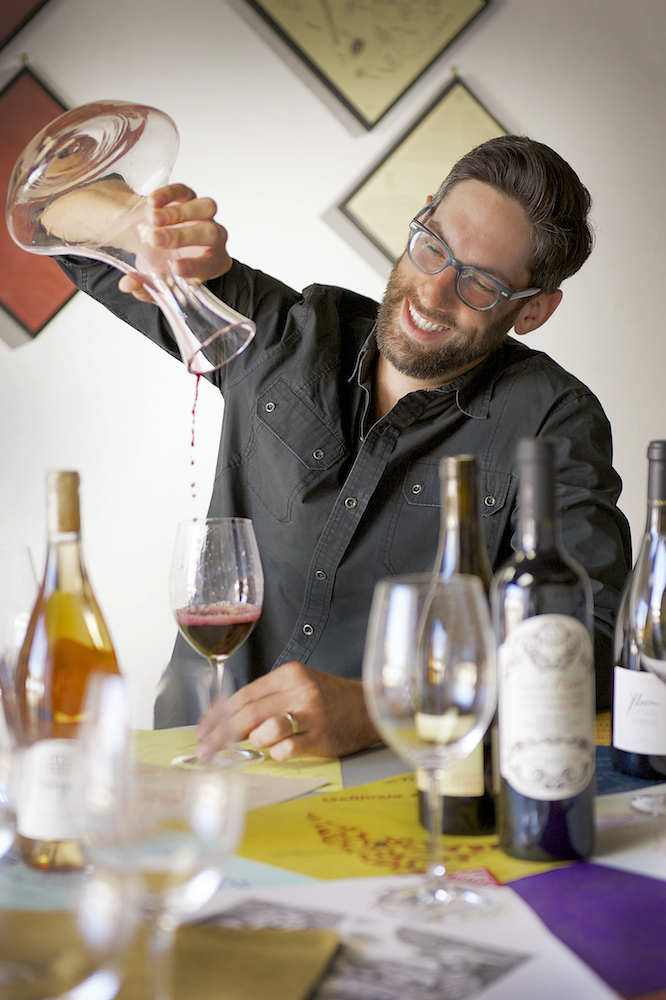 To one degree, there just needs to be more of it. I happen to know that (Wine Director)Tami (Wong) is bringing in another wine from San Diego. Frankly there's not very much. Even the slightly larger producers, they sell out, and you have to wait until the next release. I think these are fun things, even in the local market there's only so much wine made. Vesper only makes so much wine, J. Brix only makes so much wine, Los Pilares only makes so much wine. Many of the urban wineries that you're starting to hear about don't seem to be super interested in the wholesale market yet.

Do you want to tell us a little bit about your philosophy at Le Metro Wines?

The philosophy at Le Metro is twofold. Ultimately the whole project exists to introduce people to wines that they're probably unfamiliar with, but with unprecedented context. Within those terms it's all about taking people on a journey, because I don't believe that you can just put a bottle of wine in front of somebody with tasting notes and have it resonate on a deeper level. Whether it's the person who's making it, or the place where it's being made, or the story of the grape; you need something else to hold onto. Between the artwork, which changes every three months now stylistically, my own writing, which I try to make more about the wine than about myself, but using reference points of why it's there. Anyway we can get people to just really relate to it and that is what we're trying to do.

How does the club work?

Le Metro is a monthly wine club. We offer a quarterly membership as well, which ships four times a year; it ships in March, June, September, and December. It's a fanatic club, really that is kind of the point of it. Every month you receive 6 wines. Again,the odds are that you're unlikely to be familiar with any of them, but they're linked thematically. Our current release is Zinfandel Rising, it's our all California addition for the year. Six Zinfandels from around the state, which all have very different stories to tell. The next release for March, which actually just went to press yesterday, the artwork, is Underground Australia. Which was an interesting challenge to put together, to find wines in this country. We know they exist in Australia, but finding wines in this country that are imported that represent the full diversity of what's going on down there was a lot of fun. It can be a grape, it can be a place, it can do an all rose addition every year, I do an all sparkling wine addition every year. It's really just tying to get people excited, like I said. Even if there's a wine of the six that isn't your kind of thing, I want you to learn enough about it that you're happy to know it exists.