We talk to Count Sebastiano Capponi, the 20th generation of the Capponi family to run the 200-hectare estate of Villa Calcinaia. The Capponi family of Florence dates back to 1054 and has a colorful history. Count Capponi has an ancestor who stopped the French king from invading Italy and his family estate was used as a set for the second Hannibal Lecter movie.

The Capponis were famous for being enterprising merchants and entrepreneurs, developing the silk trade in Florence and moving into banking. The wine estate, Villa Calcinaia, was acquired in 1524. Today Villa Calcinaia is farmed organically. We talk Hannibal Lecter, family history, and Chianti Classico with Count Capponi.

Christopher Barnes: We are speaking with Count Sebastiano Capponi, and he is a winemaker from Greve in Chianti. He has quite a colorful family history. One of your relatives prevented a war with France, is that correct?

Count Sebastiano Capponi: Yes, well, it was an episode that goes back to 1494 when the king of France was on his way to Naples, and he decided to stop and lay siege to the city of Florence. Usually they did that in order to get money out of the city and not because they really wanted to conquer it. So he asked for a ransom, and Piero Capponi was the prime minister, or as we used to say in the Republic of Florence Gonfoloniere di Giustizia of the Republic of Florence, so he went to parlay with the king. Probably counter-ransom wasn't a very good offer, knowing the Florentines, and so the king was a little bit peeved about it and said, "Well, if that's your final word, we're going to blow our trumpets and invade the city." And Piero Capponi's famous reply was, "If you're going to blow your trumpets, we're going to toll our bells and call the population to defend the city." 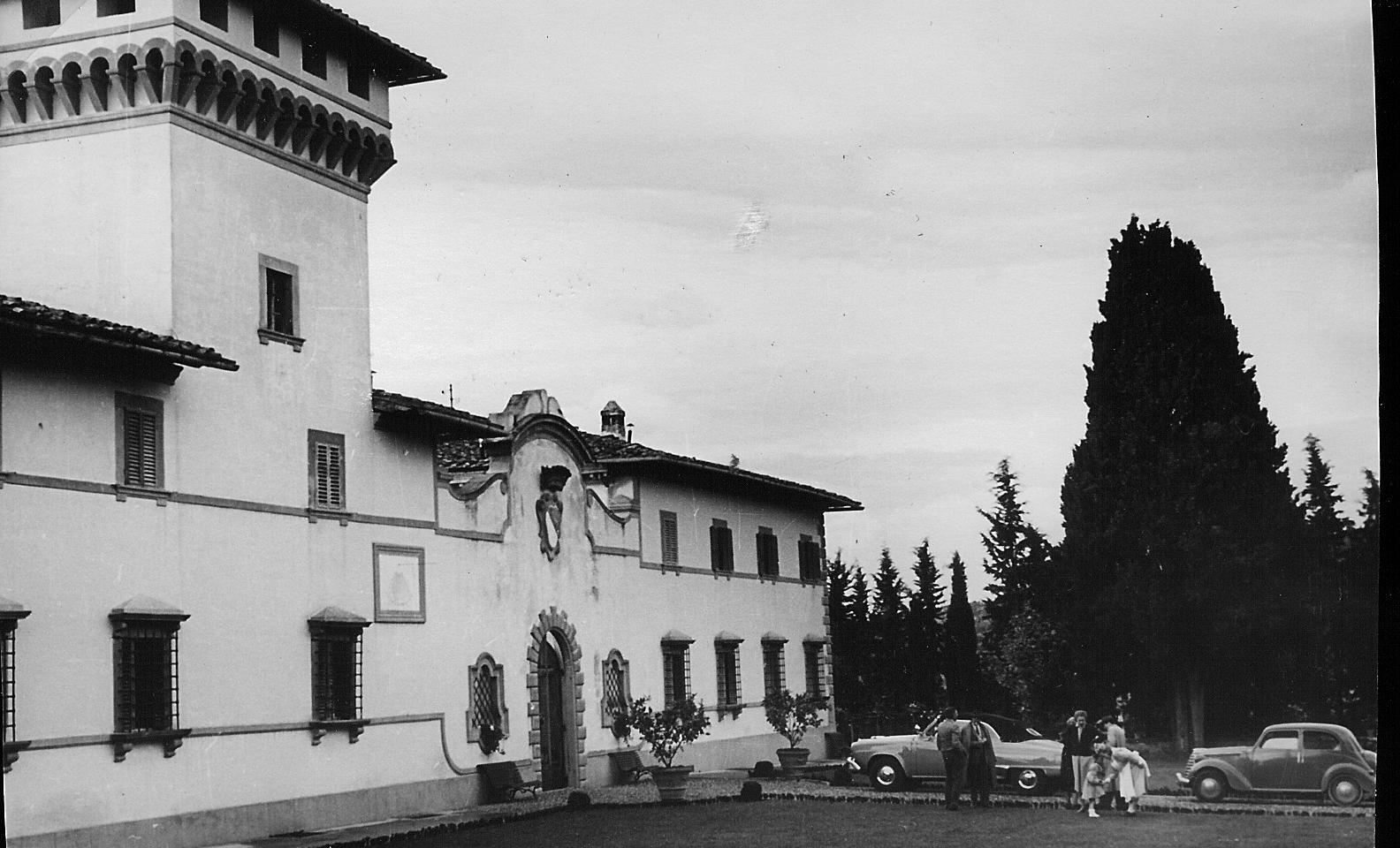 Since then, he became Peter of the Bells. Of course, they probably found a middle ground for the money, but the episode became very popular during the reunification of Italy because it was brought as an example of an Italian fighting for his homeland, which wasn't the case back then because Italy was just a geographical expression in the 15th century, but, you know, it's good propaganda. It's good propaganda for the family.

Tell us how your family ended up appearing in a Hannibal Lecter movie.

That is quite true, yes. Actually my brother plays a part in the full movie as well. The reason goes back to the fact that Thomas Harris who was the writer of the books, the series of Hannibal, was a very good friend of my brother, and once he called my brother up and said, "I'm writing the sequel of the 'Silence of the Lambs,' a book called 'Hannibal,' and I would like to use your family in the book. I would like Hannibal Lecter to become the family curator." We have an archive and a painting gallery. And my brother said, "Well, I have to ask the family that." So we had kind of a brain-storming meeting, and my brother called him back and said, "The family says 'yes' provided we're not on the main course."

The book became a bestseller, and of course Hollywood came, and we had three days with Hollywood. It was fun. I tried product placement, but it was all sold to Seagram's, so there was no chance I could get a bottle of Villa Calcinaia on the film, but I would go to the countryside every morning, leave two bottles of wine, one Chianti Classico, one Chianti Riserva. I would come back at night. The bottles would be empty, but there was no product placement.

So that's pretty fun. You had them there, staying at you place.

Your family has been prominent in Florence for a long time. 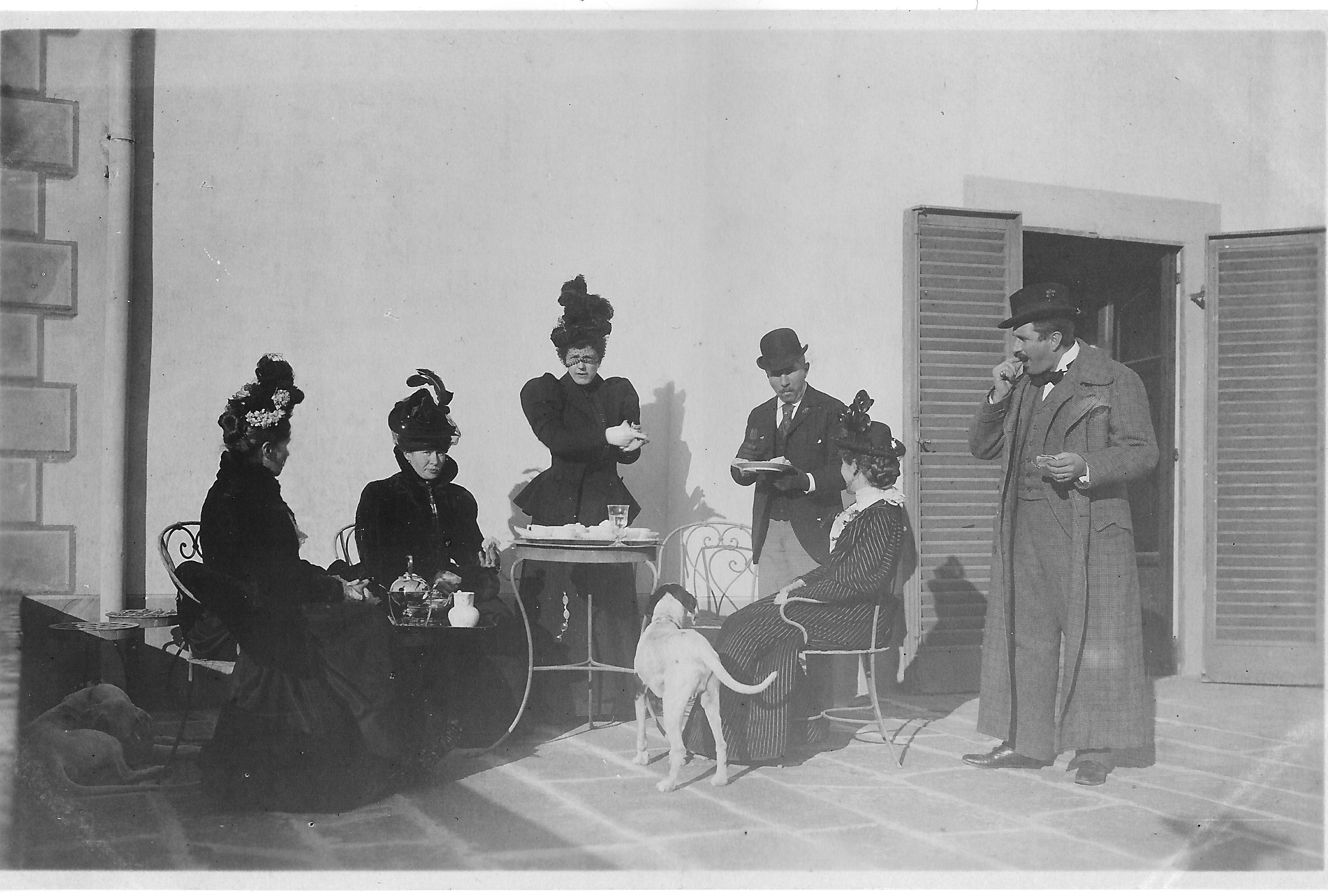 We are a Florentine family. We started shop 800 years ago in Florence. The first official document on the family, in fact, dates to 1215, and it was the year that Cappone Capponi, one of my ancestors, enlisted himself in the Guild of Silk. The reason he did that is because if you were part of the guild in Florence, you could be part also of the political life. Only if you were part of the guild you could elect or be elected, so it is a very important starting point for us. Our family was one of the ruling families of Florence until the Medici took over, and we had 12 prime ministers of the Republic of Florence and many, many ministers. I would say in the old part of Florence, which is the part where my family is from, the southern part of Florence, we were probably the ruling lords of that part of Florence. It was the good old days.

We were merchants--silk, wool, and bankers. We had banks all over Europe. We had banks in Barcelona, Lyon, in London, in Udine, of course in Florence, in Rome. With the banking we made most of our money, and that's how we started buying properties. Villa Calcinaia was bought because of that. It was actually a personal hold as money, so he gave the estate to extinguish the debt, so that's how we acquired the property in 1524.

So your family's been making wine since 1524. 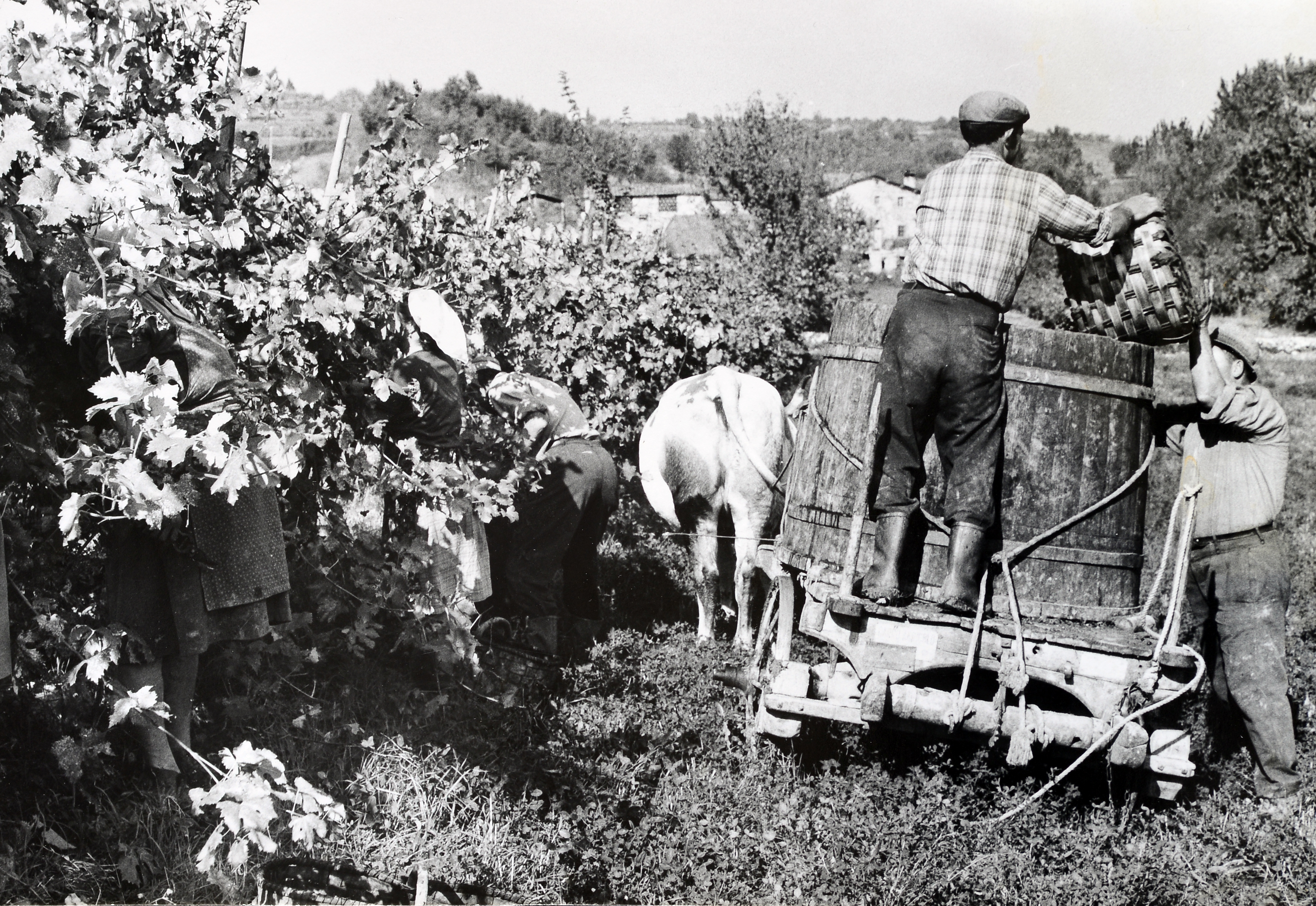 Yes, yes. Wine is part of the diet. The farm, as we conceive it now, is a little different than what it was before. Before, the farm would produce everything that was needed for sustenance. Wine was part of the diet, so wine was one of the products the farm would make. Nowadays we tend to specialize in certain items, certain food items, but back then there was no specialization. Every field would need to bring bread, meat, oil, wine, butter--all of the elements you needed to cook and to survive.

Tell us a little bit about the terroir of Greve in Chianti.

The terroir there, it tends to make ... I'm a big Burgundy buff, so I tend to think that my wine is very much like Chambolle-Musigny in the sense that the wines are very fine and very elegant and very approachable, even from a young age. That doesn't mean that they don't age well. We just did a tasting with some 1968 and 1969, which were just beautiful, but it means that they are very, very approachable from a young age. They're not tight. They're very affable, I would say. That would be a good word to describe them, yes. I think it reflects also the kind of people that we are. We have different bloods because I'm a quarter Greek, one-eighth Swiss, a quarter Italian, and the rest is British. We like the world, and we like meeting people, and wine for us is very much important for sharing with people. I think that also reflects on the kind of wine we make.

My philosophy of winemaking is like the good, old family doctor. If the patient is healthy, I don't do anything to it. If there is a problem, then we'll intervene. That means that I don't use any kind of commercial yeast. It's organic farming, and we don't use any kind of fertilizer. We just let nature take its course, and then if there's a problem we'll try to solve it. That's my philosophy of winemaking.

I started working in a winery in the '90s where the intervention was very much more enhanced than it is nowadays. I remember my first harvest. I used to do a lot of pump overs, a lot of racking. Nowadays we have learned from experience that probably nature knows better than we do what needs to be done, and we just intervene, as I said, if there is a problem. 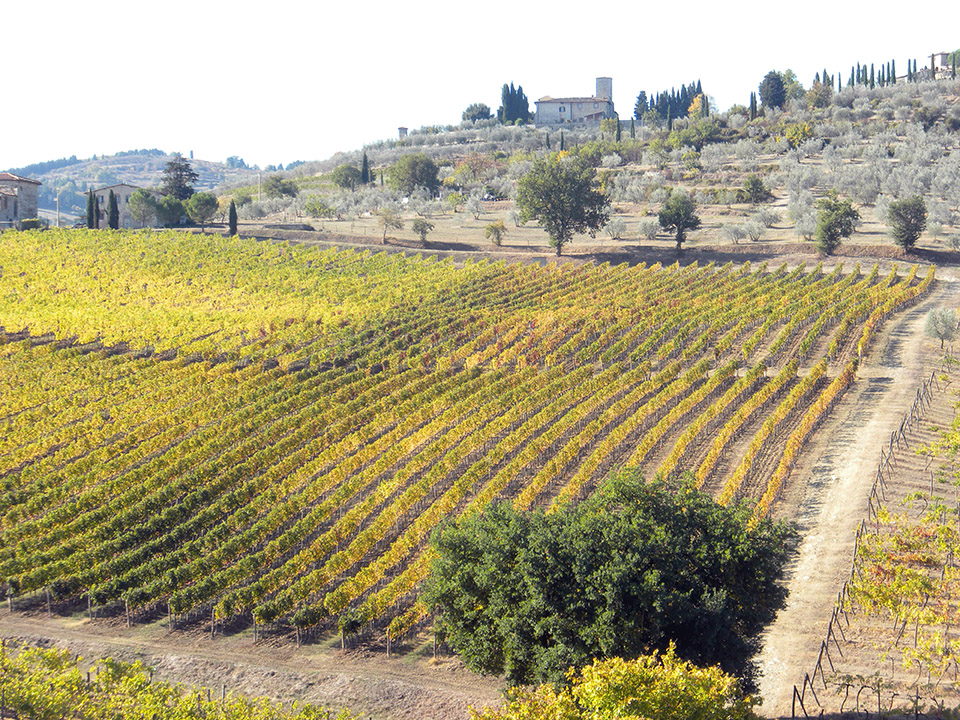 How long have you been organic?

We've been organic for 15 years, but we got the certification ... We started the process of certification in 2011. From a legal and bureaucratic point of view the 2014 vintage will be the first official certified organic also on the label.

What is it about making organic wines that's important to you?

Part of it I think is that it's the place where I live. You would like to live in the place that is as healthy as possible. I am working for this generation of the family, but we have had this winery for many, many generations, I would like to leave something as a legacy also for my kids and my grandkids. I don't think that ruined soil is one of the things I should leave to my kids. I try to preserve what I got, and I try maybe to improve it.

How would you describe the Sangiovese that you produce? 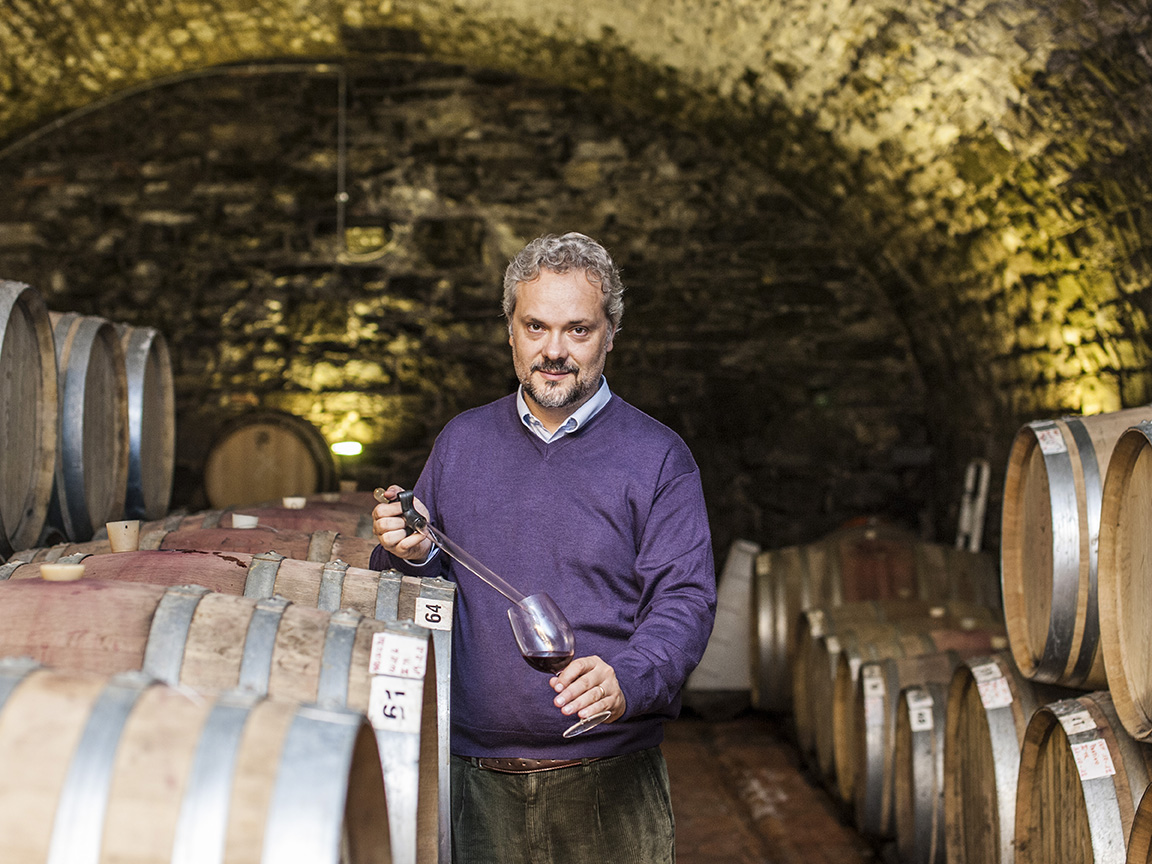 Yes, our wines are very more on what I describe fine wines. If you're looking for wines that are more in the blustery and more maybe big-shouldered, Greve is not the right place you should look for. You maybe should go more on the clay slopes of the Berardenga where you have the big tannins. If you like the style of Greve, you like the style that has nice graciousness, so they're very gracious wines. They are wines that are very drinkable. I am a drinker myself, so the important thing for me is that bottles should be finished. That's, I think, the best way to describe it. For me, it's acidity is a very important thing as well. I like the fact that my wines go well with food, so that's how I drink. I don't drink wine outside of meals. I drink beer before a meal, and I drink scotch after a meal. If I'm having something to eat, then it's wine as a companion.