Georgian Wine Series Part 1: All We Have to Do is Drink

Wines from Georgia are as in-mode in the U.S. as they come, with imports nearly doubling in the first half of 2019. Native varietals, natural yeasts, minimal intervention, small family producers… the wines check all the boxes for the hip, progressive sommelier. The history of wine begins over 8,000 years ago in Marneuli, Georgia – at a non-descript work-in-progress archaeological site where the oldest known evidence of winemaking was recently discovered in a clay pot. Georgia’s wine story is filled with tragedy and war; resilience and triumph; god and legends; love and loss… all the makings of a beloved David-Goliath wine story. The country is beautiful, the people are hearty, and the wines are affordable.

And while Georgian wine continues to be a hot topic among trendy New York sommeliers, it’s yet to become mainstream by any stretch of the imagination. Last year, Georgia exported nearly half a million bottles to the U.S. Even if the current trend continues and the amount of Georgian wine imported to the States doubles in 2019, it still wouldn’t even register as a rounding error compared to the nearly 5 billion bottles of wine consumed. So, despite the relative growth in popularity, the “Georgian Wine Boom” is really no louder than the popping of a single popcorn kernel. How was it that Georgia got banished to obscurity whilst France – more than one in three bottles of imported wine opened in the U.S. is French – got ushered to the limelight of mainstream media and financial success? And, why should I care about Georgia now? 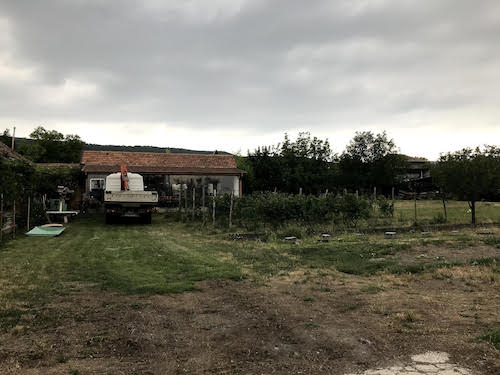 I imagine if you were to dig, one of the reasons you’d find for Georgia’s banishment is money.

Georgia has no money. The American state of Georgia’s GDP is 15 times bigger than its country-counterpart. “Wealthy Russians come here and buy all the land and start developing,” shares Mukhran, our local guide and dear friend throughout our month’s stay in Georgia, “none of it goes to the people.” Mukhran’s fury is evident though he tries to mask it with a half-smile as he shares the story of Georgia’s current political situation. Georgia has been pro-western since the beginning of its most recent stint of independence which began in 1991. “The Russians committed unspeakable atrocities to us Georgians. They killed our royal family and canceled our kingdom. Not even the Turks did that to us. And now Ivanishvili is doing everything backwards, he is Putin’s buddy.” Boris Ivanishvili isn’t technically politically active any more, but every Georgian knows he wears the pants in the Georgian government. Some years ago, Ivanishvili sold himself a piece of prime real estate in the capital city of Tbilisi for 1 GEL ($0.34). “America is our only hope,” concludes Mukhran, “Europe always turns its back on us in the crucial moment. Only America can save us.” My heart drops. Right now, America is not in the business of saving anyone – not even other Americans in Puerto Rico or next-door-neighbors in the Bahamas.

Over the course of its history, Georgians have been bullied by Russia and other powers. The Russian embargo on Georgian wine in 2006 wreaked havoc on the Georgian wine industry for the better part of a decade but ultimately sparked the initiative to seek other markets. Perhaps without that embargo, Georgia’s banishment would have continued for many years more. A developing wine industry requires investment from the government in marketing, advertising, and tourism. Prior even to that, the first prerequisite is sovereignty, independence, and peace – none of which have been a constant for Georgians. In the last 30 years alone, the people of Sakartvelos – the locals’ name for Georgia – have experienced a coup, civil war, revolution, and invasion. Not to mention that the rest of Georgia’s history is littered with invasions from larger empires like the Mongols, Turks, Russians. Grapes cannot survive the wrath of war.

Recent years have been a time of relative peace for Georgia, however, allowing for the development of a burgeoning wine export industry. One of the new challenges facing Georgian exports is not dissimilar to that of many non-Romance-language-speaking wine-producing nations: no one can pronounce the names. Of varietals, regions, producers. It’s not uncommon to see a grape varietal spelled with four or five consecutive consonants and oddly placed vowels. How would you feel if you saw a grape varietal spelled with the following letters consecutively t-s-k-h? Or perhaps m-t-s-v? People don’t order or buy what they can’t pronounce because they don’t want to look dumb. And, there’s no place you’d rather not look dumb than in front of a sommelier or your hot date or your in-laws. Otskhanuri Sapere or Mtsvane? Eh, I don’t think so; I’ll have the Cab, thanks. 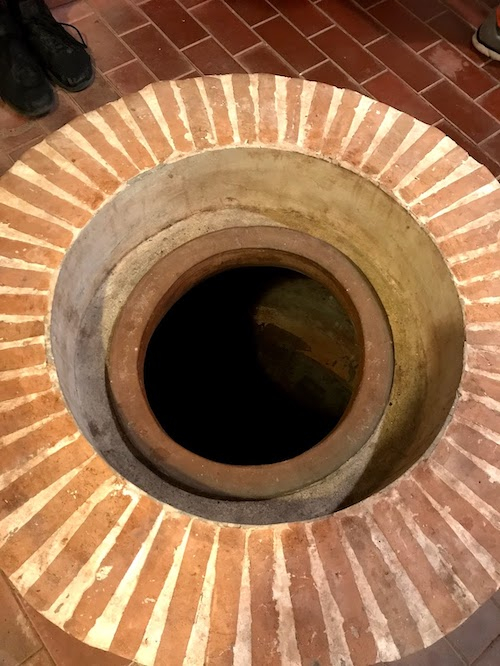 There’s not a whole lot of familiar for wine-buyers to latch onto when it comes to Georgian wine, which is actually part of the appeal. Most Georgians have stayed true to their ancient winemaking traditions and their native varietals. They proudly plant, grow, vinify, and drink the ancient indigenous grapes that naturally thrive in their respective regions and climates. As a result, pretty much everything identifiable on a bottle of Georgian wine is unfamiliar. Take Baia’s Wine, Gvantsa’s Otskhanuri Sapere, Imereti for example. The only easily understandable element is “wine.” It’s not clear that Otskhanuri Sapere is the grape varietal – a late-ripening, high-acidity red; it’s produced by the company Baia’s Wine – it’s not uncommon, however, for wineries in Georgia to give credit to the person (generally a family-member) who makes any given wine, in this case Baia’s sister Gvantsa; it’s from Imereti – a cooler-climate wine region in central-western Georgia. It’s hard to choose something you don’t understand. Inertia and comfort are powerful drivers of choice.

Lastly – and perhaps most excitingly for wine geeks and sommeliers alike – the sheer number of new grapes, new regions, new wines is overwhelming. 8,000+ years of wine history; 500+ grape varietals; 1,000+ producers; dozens of wine regions. And because there’s the possibility for such depth and such breadth rooted in millennia of history, Georgia has caught the fancy of New York’s finest. In Kakheti to the east, you’ll find hearty, full-bodied amber wines from Rkatsiteli – so called because the maceration of the grape skins colors the would-be white wine a rich copper, like a young single-malt. In Khvanchkhara to the west, one of Georgia’s 20 PDO’s (Protected Designation of Origin) and the namesake for the wine produced there and in the neighboring villages, you’ll find a naturally semi-sweet red made from Aleksandrouli and the very-late-ripening Mujuretuli. And you can find almost everything in between. There’s a world of grape-biodiversity tucked away in this tiny nation. 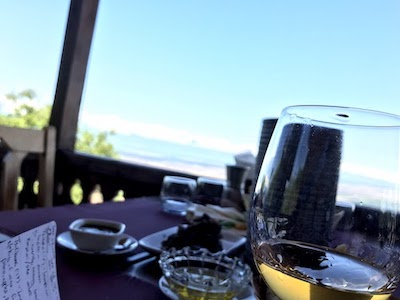 As with any wine region, you can of course find behemoths using modern techniques pumping out large quantities of alcoholic grape juice. But with the small family wineries, it’s mostly hand-harvested, hand-sorted, naturally fermented (i.e. no added yeast) wines across the board. That means wines with less additives and more heart and soul. And through it all, Georgian wines are incredibly affordable – nearly two thirds of Georgian wines retail for under $20 based on an analysis of price data available on Wine Searcher. That probably won’t continue to be the case for too much longer. As a wine region increases in popularity, so does the accompanying price tag, and according to Georgia’s National Wine Agency the value of Georgia’s exported wine is already rising.

(Photo: Glass of amber wine in Sighnaghi with the Caucasus Mountains in the distance)

Georgia is a country with a painful history but a hearty, resilient people, and that spirit is reflected in the wines. It’s a country with an ancient wine culture worth celebrating and preserving – a wine culture worth saving. We may not have any real control over whether or not America will save Georgia in a geo-political crisis. But, we can save their wine. All we have to do is drink. 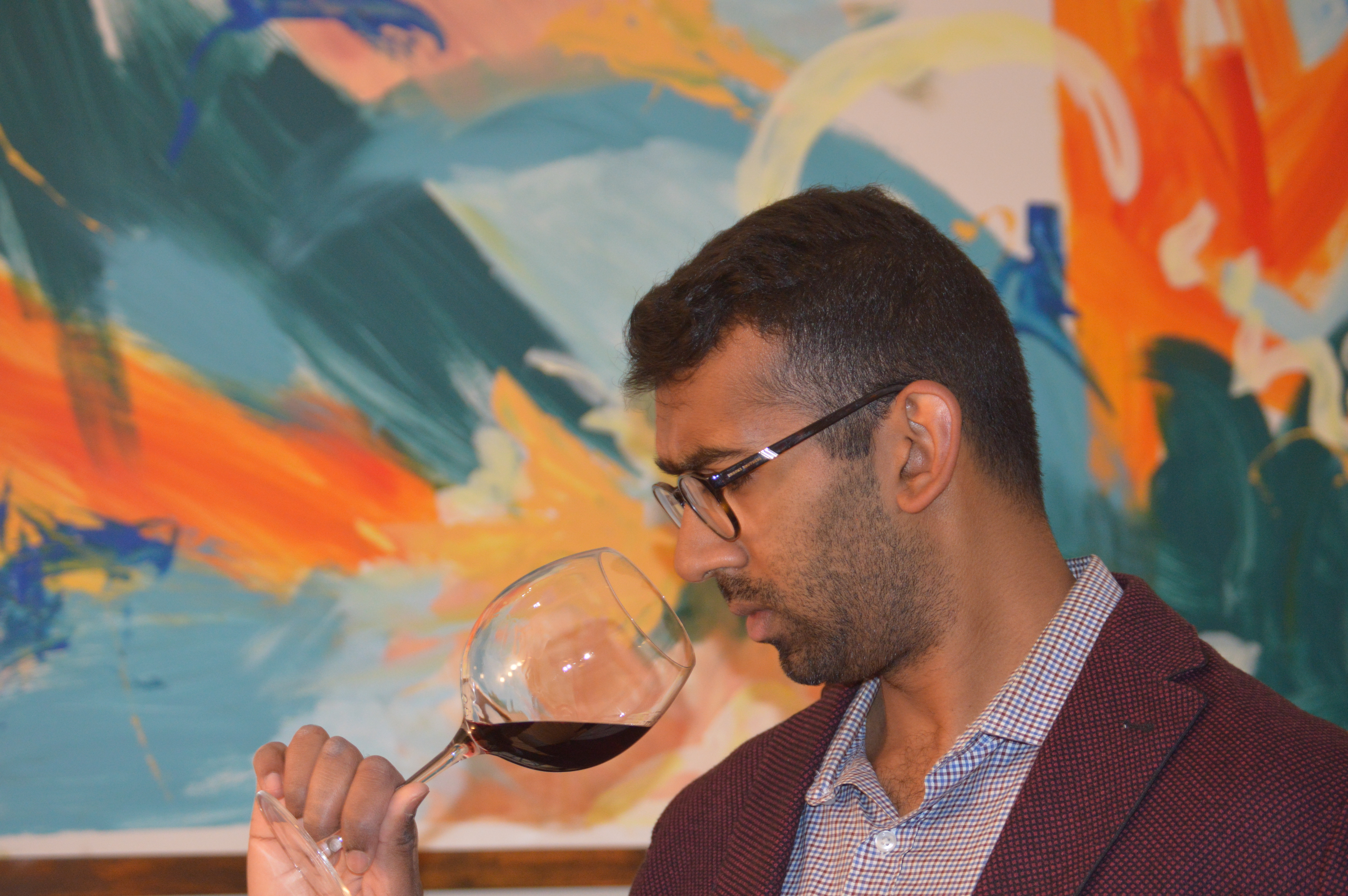 Ashwin owns and manages a DC-based wine education business, Personal Sommelier DC, where he leads tastings for both private and corporate clients. He has lived in Georgia (the country) and Italy studying wine as well as the U.K. studying whisky. Ashwin enjoys the path-less-trodden when it comes...