We are about to open a 2003 Beaujolais Nouveau, right here, right now.

We can hear gasps all over the world, like when Janet Leigh got stabbed in the shower, the ball went through Bill Buckner’s legs, Donald Trump was declared the winner over Hillary Clinton.

Nouveau is the ultimate drink-this-minute wine. It’s a celebration gulper, meant to age only as long as it takes to get it home. In fact, one way to know you’re in a bad wine store is whether it’s still selling last year’s Nouveau well into the current year.

We never intended to age a Nouveau long enough for it to be eligible to vote. For years, we hosted a Nouveau party on the day it is released, the third Thursday in November. In 2003, we had a bottle left over and we thought it might be fun to see what it would taste like in a year. Then, it kind of got lost in the cellar.

The larger issue here is about aging wine. Newcomers to wine are often intimated by this subject because they’ve heard there is a mysterious “perfect age” for wines, although the perfect age for most wines is today. Truth be told, even long-time wine lovers are nervous about this subject because, heavens, what if they open their 2005 Lafite-Rothschild too early and therefore commit what, in the wine world, is sometimes and unfortunately called “infanticide” – or wait too late and find it old and tired? (Disclosure: We have a 2005 Lafite and we do look at it from time and time and think, hmmm.)

Similarly, newcomers sometimes think a wine is worth big bucks just because it’s old. Over the years, we have received many letters from people – especially around Open That Bottle Night – who have, say, a bottle of Mateus that Granddad bought in the ’60s that they’re sure is the Hope Diamond of wines because it’s ancient. It’s not. At the other end of the spectrum are wine aficionados who say a newly released fine Bordeaux or Burgundy is “undrinkable.” Well, sure, it will be better later, but any wine that is truly not enjoyable on any level today is not going to miraculously get delicious in time.

Our columns often have a kind of news peg – Father’s Day, Thanksgiving, even Presidential elections. The news peg here is more existential: We both have important birthdays coming up this summer and we’ve been thinking quite a bit about the pros and cons of age. 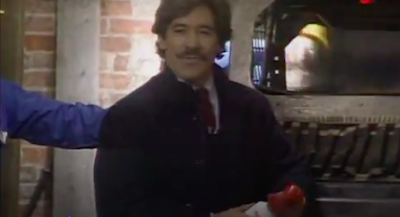 All of this is why we’re going to open our 2003 Nouveau. Will this be a Capone’s Vault moment? Will the wine be like the beautiful woman at the end of the movie “Lost Horizon” who suddenly shrivels and dies of old age when she leaves Shangri-La, a scene that scarred John for years?

Nouveau should not be aged. Period. “Old Nouveau” may be the ultimate oxymoron. But some of the better regular Beaujolais, the crus from the 10 special villages, such as Moulin-à-Vent and Morgon, are excellent with two or three years and sometimes more if well-kept. Some time allows their youthful vigor to calm a bit while they also retain the fruitiness, earthiness and charm that make them so lovely. They’re all made from the Gamay grape.

As we’ve written, better Beaujolais is in the midst of what we hope will be a transitional period. Nouveau was so popular a couple of decades ago that too many consumers confused it with the real thing. When Nouveau became déclassé – for many reasons, including too much hype, rising prices and questionable quality (we don’t like bananas or anchovies in any of our wines) -- so did the good stuff.

That’s such a shame because better Beaujolais is such a delicious, versatile wine that can be a great bargain, too.

Our 2003 Nouveau is from one of our favorite Beaujolais producers, Paul Durdilly et Fils. Their Nouveau was a winner year after year and so were their other Beaujolais. This is a trusted name. We search for it. We are not expecting this old Nouveau to be very good and uphold this fine name, but that’s not the point. This is more like opening a bottle rescued from a centuries-old shipwreck and just being curious.  Is there any fruit left? It is truly vinegar? We feel like “Indiana Jones and the Last CRUsade,” in which, as it happens, someone else turns to dust.

Let’s get started, shall we? We prefer Nouveau with a chill (we prefer all Beaujolais with a little bit of a chill, but more so with Nouveau), so we’ve put the bottle in the refrigerator for an hour to get it down from cellar temperature. The glasses are ready -- white-wine glasses because we don’t want what fruit is left, if there is any, to dissipate quickly in larger, red-worthy glasses. We are going to use a prong opener because the cork was obviously not designed to last until now, but we have others as backups.

We are going to open and taste while our daughter Zoë takes a video.

Dottie: It’s exciting. It’s hard to tell. But there’s nothing obviously floating in it, which for me is always a good thing. There’s a little bit of sediment on the side of the bottle, just under the cork there.

John tries the prong opener, but the cork is so tight it won’t budge. He tries a regular corkscrew and the cork breaks in half.

Dottie: It didn’t want to be opened.

John goes after the bottom half and, with a mighty pull, he gets it out with a “pop.”

John: This is a really good cork. Really sound. It clearly helped protect it. So let’s take a sip real fast.

Dottie: It’s not as strange as I would expect.

John: How would you describe this color?

Dottie: Kind of strawberry wine-ish. It smells like wine.

Dottie: There’s a nice bitterness. Look at that color. It’s pretty to look at, but darn strange for a red wine.

John: I don’t know what color I would say this is. It’s not brown. It’s not quite orange.

Dottie: Garnet. Light garnet. Darker than grenadine. Like a cocktail of some sort.

John: There is a certain iron-esque quality to this. But it’s not like it’s turned to vinegar and it’s not like it’s awful, it’s just really old. It tastes like blood a little bit. There’s nothing about it that isn’t old, but it still has some fruit.

Dottie: We’ve had young wines that taste a lot like this.

John: Even expensive wines. Not that we’re happy about this.

Dottie: I can see this with what I’m cooking now, pork with capers.

Dottie: It’s really resilient. You know, wines are not as delicate and fragile as a lot of people suppose.

John: Nobody should try this at home, but it just goes to show that all those old bottles that people have that they look at and because they’re old and shouldn’t be good, they pour them out without tasting them -- taste it first. What’s the harm? I mean, literally, what’s the harm? It’s unlikely it’s going to kill you. Now, Zoë, if we die tonight…

7 p.m.: Dottie: That iron quality is still there, but it’s calming.

John: I’m getting it pretty heavy. It reminds me a little bit like when we were kids and sometimes used to lick a metal swing set. If you ever licked something steel or metal…

Dottie: I never did that.

John: Well, of course you didn’t.

Dottie: That reminds me of “A Christmas Story.” “Stuck! Stuck!”

John: I would not say this is a real pleasure to drink. I certainly wouldn’t gulp it. But it’s still wine.

7:10: Dottie: There are some vinegar notes now.

7:20: John: The vinegar notes have blown off a bit and there’s a little black cherry that wasn’t there before.

Dottie: There’s a different dimension of fruit. Isn’t that wonderful? This is what holds our interest in wine. You just never know.

John: The winemaker would be horrified that we’ve done this, and rightly so, but it really is another indication that well-made wine is well-made wine. You can tell that this was made from real grapes by a real person and there was soul that went into this bottle.

7:45: John: I’d say the vinegar has blown off, but it’s definitely dusty on the nose. But it really hasn’t degraded even with the air and the warmth. I would have expected that it would have gone through a lot more of a life cycle by now.

Dottie: Me, too. That’s why I feel good about coming back to it in an hour. Tough stuff. Fun.

9:45: Dottie: it is basically unchanged except perhaps a little bit more acidity.

John: This is kind of what I would hope from a wine that had been in a sunken ship. As long as the cork is sound, it is in its own environment and really, why should it turn to vinegar?

Dottie: Assuming it was good wine and well-made to begin with.

We left a little in the bottle for the next day. By then, the iron notes were a little stronger and the fruit a touch more wizened. There was some sediment at the end. It was tired and very much like drinking dirt, as we might expect, but it still made us smile.

And that really is our point: Wines should please you, make you happy – and not just fine, precious or expensive wines. This weird little experiment reminds us that, at the end of the day, the best finish any wine can have is a smile.