The Wine Bible’s Karen MacNeil on Mansplaining and Pleasure

One of the highest compliments we can pay a person is to use a nickname borrowed from the industrious entertainer James Brown, who was called “The Hardest Working Man in Show Business.” Dottie saw him perform on the campus of Florida A&M University when she was a teenager. There was no “quit” or “enough” in the man. 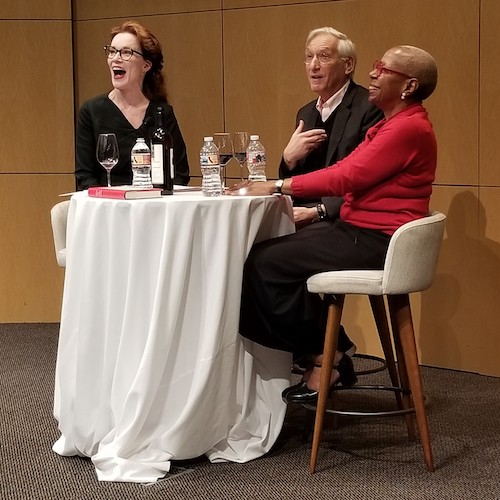 The same can be said of Karen MacNeil, whose third edition of the Wine Bible was recently released. As its bold name implies, it’s a grand opus, a staggeringly thorough, entertaining and thirst-inducing work about that beverage we love so much. We have all three editions and it has been one of our top go-to resources since the first was published in 2001. That first edition has a blurb from Robert Mondavi hailing it as “a must” read. With almost a million copies sold since its first edition, we have recommended the Wine Bible as a great gift for the wine lover in your life, and we do so again.

MacNeil has traveled to almost every wine-producing region of the world and, for this edition, tasted more than 8,000 wines for research. It’s a wonderful distillation of what she has learned, presented in easily consumable sections that include mouth-watering regional wine and food pairings, need-to-know wine words in several languages, information about climate change and smoke taint -- and this edition is in color. Although we had been reading McNeil for years and included her in our books and in Tastings, our column in The Wall Street Journal, we had not met her until 2019, when we all participated in what is now called the Wine Writers Symposium at Meadowood, Napa. She’s delightful. Then in 2020, she interviewed us, before an audience of 200 people, at a celebration of the donation of our papers to the Warren Winiarski Wine Writers Collection at the University of California, Davis, which will also house her papers.

MacNeil was raised in a “poor, uneducated Irish Catholic family” in Boston and left home when she was 14, supporting herself with several jobs through high school and drinking a glass of wine as she did her homework. At 19, she moved to New York to become a writer. Her early attempts resulted in 324 rejections and a period living on food stamps. Her first wines were 89-cent Bulgarian reds. A piece in the ’70s about butter caught the eye of an editor at the Village Voice and eventually assignments from other publications about other foods and increasingly wine followed. A wine friend belonged to a tasting group and he got his friends—all male—to agree to allow her to taste, if she did not speak. This went on for six years. In 1990, Peter Workman, of Workman Publishing, called after reading her piece in the New York Times about lobster rolls and offered her the chance to write a book. This, 10 years later, became the Wine Bible. The third edition is dedicated to her teenage daughter, Emma, who died in 2020, and to her husband, Michael.

MacNeil created and is Emerita chair of the wine program for the Culinary Institute of America at Greystone in Napa. She created and is editor of WineSpeed, a website jam-packed with mini reviews of wines you should be trying now, videos, Q&As, quizzes, interesting facts and figures, and interviews with wine people. She conducts virtual tastings and in-person tastings for organizations and corporate clients around the world, teaches night classes, and leads an online wine course for Stanford University. She is the hardest working woman in the wine world. We spoke with her recently during a break from her book tour and tastings. This is edited and condensed.

Grape Collective: You’re meeting a lot of people on your book tour. How are they different than the people you’ve met for the previous editions?

MacNeil: I felt that with Wine Bible one and two, that a lot of the people that I met were somewhat interested in wine, kind of interested in wine, but I would say not necessarily manically interested in wine. Now, people often want to tell me their journey in wine and how passionate they are about it and how they’re at WSET Level 3. There’s a much greater intensity level.

Grape Collective:  We keep hearing that younger people are just not into wine. Are you finding that to be true? MacNeil: I don’t believe that is an alarm that should be sounded with such a sense of panic. I think about all of the people I know who love wine and will say they got bitten by the wine bug. I never hear anyone say I’ve got unbitten. People come to wine at different times in their lives. I don’t believe there is any reason to believe that wine has lost its allure, that it’s lost its intellectual compellingness. Wine is as relevant and as captivating today as it’s always been. I think the audience will come. I would be curious to know that the people who were 40 years older than the current Baby Boomers fretted about whether these Baby Boomers would ever fall in love with wine. I just have a feeling that Millennials will, given the chance. Wine is no less intriguing now than it was before. Wine is one of the world’s greatest beverages ever and it has found an audience for 9,000 years and I just don’t think it’s going to stop now.

Grape Collective: We have said and you have said that if you think a wine is good, the wine is good -- for your taste. But that doesn’t make it widely accepted as a great wine. It’s simply a wine that you find to be good for you. Have you ever been called an elitist for that view?

MacNeil: No one has ever called me that, I think, for two reasons, maybe. One is that I’ve never made any bones about the fact that I didn’t grow up with wine, I didn’t go to Oxford or Cambridge and was on their wine debate team. I’m not a Master of Wine, I’m not a Master Sommelier. My first wines cost less than $1. I wasn’t spoon-fed First Growth Bordeaux by my parents. So there’s that. But also the Wine Bible has a tone. I have a way of writing that is not elitist. It’s very conversational. I work hard at having my voice not be elitist. And I don’t think I am elitist so there it is.

Grape Collective: You’re one of the world’s most recognized wine experts. You once told us that men do some mansplaining even to you. Does that still happen?

MacNeil, laughing: Oh God. Yes, it happens all the time. I was at a tasting recently -- I won’t say whose -- in San Francisco. There were a lot of French wine producers there who I didn’t know and some American produces who I did know. So the American producers were pretty cool. But the French ones, I could see that they were speaking to me a little more slowly and thinking about whether or not they should explain a relatively complicated concept that I had overheard them just explain to the man before me. Yes, that still unfortunately happens.

Grape Collective: Do you think we are headed toward a kind of new prohibition? There seem to be increasing efforts to cast wine as bad for you.

MacNeil: One of the things that I’m watching and concerned about is, wine is part of a larger fabric of the importance of pleasure. When you see governments attempting to control or dictate ideas about pleasure and about individual freedom, then it’s not that far of a baseball’s throw away that more and more strictures could begin to close in on us. There’s an encroachment right now of people who want to dictate how everyone should live their lives and that, I think, should be frightening to us all. 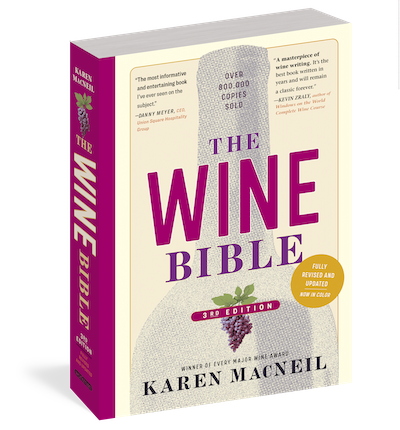 Grape Collective: After a day of signing books and traveling, aren't there times when you just want to have a beer?

MacNeil: There are times, if it were summer, I’d have a gin and tonic and in winter there are times when I think I’d have a Manhattan. So I love other beverages, too, and I certainly have liked good beer. But if I find that I’m tired of wine my next step is probably toward a cocktail and not a beer.

Grape Collective: And can you drink a cocktail in public?

Grape Collective: If you ever retired, what would you do?

MacNeil:  Gosh, I think I would probably for a month wander around cleaning the house really well. I’m a neatnik. I would clean every closet to utter perfection. And then I would find something. I would decide, I don’t know, that the school system needs better writing teachers and I would start teaching teenagers how to write better. I’ve never not worked. I started working at 12 and was supporting myself at 14 so I’ve never not worked and I don’t think I would be good at not working. I would absolutely invent something to do and God knows, there are plenty of things that need doing including teaching teenagers how to write better.

Grape Collective: We think Spellcheck is responsible to a certain degree for poor writing skills today.

MacNeil: I made this joke in WineSpeed recently. Spellcheck changed Romanée-Conti to Romaine Lettuce. No! That’s a step too far.