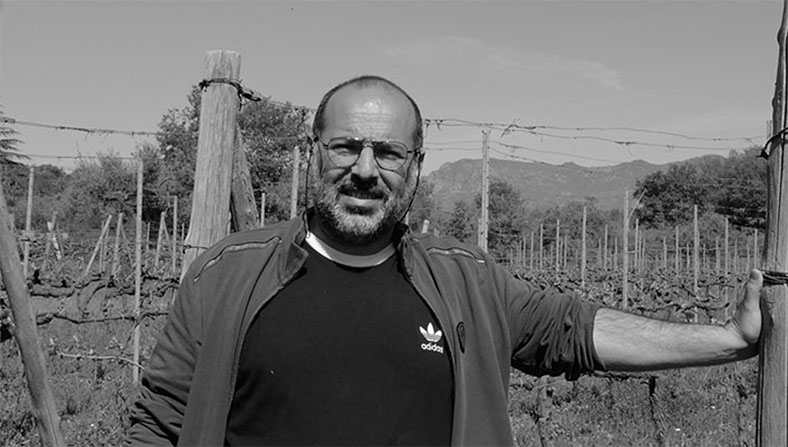 On the scenic slopes of Sicily's Mount Etna on the northern side of the volcano in Castiglione is Produttori Etna Nord - an association of five small family producers that have united to share the indigenous varietals of the region with the rest of the world. Though the wineries are in close proximity to one another and have a common winemaker, the variations in the terroir allow for differences in their grapes and wine styles.

Grape Collective talks with Davide Dì Bella about the uniqueness of winemaking on Etna, the impact of the volcano, and how the region has evolved over the years.

Davide, what is Produttori Etna Nord?

Davide Dì Bella: We are five small azienda that seven years before, began to work together, so we are a small association called Produttori Etna Nord. But of course, our family has made the Nerello for centuries. We started here you see in our palmento Etneo, 150 years before. But in the last seven years, we had this idea to work together with many ideas, to export, to develop our project, to make also different wines in different contradas, because even though we are very small, we have Nerello and Carricante in six different contradas.

What I say to you in Castiglione di Sicilia there are 45 contrada, and in Etna, this is very important, because each contrada, also sometimes inside the same contrada, you make different wine.

Talk a little bit about the size of each individual producer and how that relates to Etna in total. Because you have some very big producers, and then you have more small family operations like yourself.

Yes, we are very small. We are also native of Etna. And I just like to say this because now Etna is very fashionable. We have people from Asia, from northern Europe, from of course, northern Italy, Tuscany, Piemonte. So we're still alive, because in the last 20 years, it's been a big revolution and we're still alive and we go to work. We are very fast. We have our project and between the five associations it is not so different. Each association has about one half to two hectares. So that means together, we have 10 hectares with Nerello Mascalase, a little bit of Nerello Cappuccio, and Carricante and Catarratto.

And so how long have your families been in Etna making wine?

My family, and that of Piero, the winemaker, and Giuseppe, started 150 years ago. You can see in our palmento Etneo. And of course, between the '70s and '90s everybody stopped going to Etna. So there wasn't big business. The people paid not so much for wine. And at the time, everybody stopped with this kind of work, but in the last 20, 25 years, we got started again. That's meant like this, that we were putting in new grapes. These grapes are now 25 years old, but also for the Feudi di Mezzo we make the alberello. A little bit of new alberello, but also the old one. And yes, this is very nice because the alberello, the Nerello, all this are here in our hearts. We are really from the family, from this area. 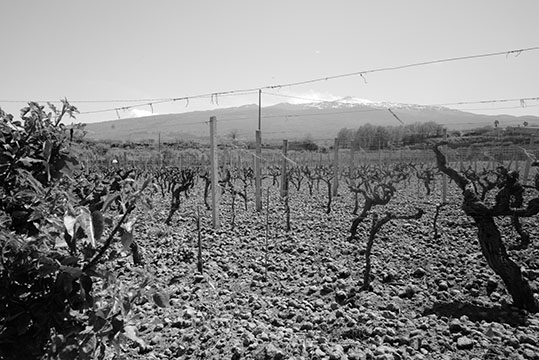 For somebody that's been here for generations, how have you seen the changes in Etna?

Oh, of course, the change we see in a positive way, but also big changes and also big business changes, because all the grapes go up with money, with value. So we try in our small situation to develop and we like... But also for example, like Tornatore, we are from the Castiglione. This is little bit the difference, but we see this as a positive change, because in this way, we have more new winemakers, new technology and for everybody, it's always good. But for us, it's important, our tradition.

And do you have any concerns when you see a big winery moving to Etna?

No, we don't have concerns, because we hope that the people that come here, they'll respect our territory and  respect our vineyards.

And how would you describe your terroir here in Etna?

The first thing you think about regarding the terroir is mineral, about the volcano, about minerality, but I like myself to think finesse and elegance to describe our wine.

And your winemaking philosophy?

The winemaking philosophy for us, what I say is the objective, is always to try to develop finesse, elegance and of course acicity in the Nerello and the Carricante. This is a little bit of our philosophy. And we like, of course, not to have too much influence. So we don't use much wood, but just a little bit in some wine, 5%, 10%, so this is our philosophy. We use also in a couple of wines, red, some amphora. And we try when we use wood, to use big wood. 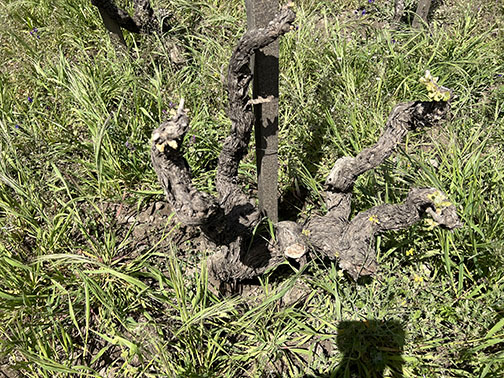 Talk a little bit about the palmento.

In Castiglione, we have maybe two, three palmento, and it's our story. It's where you as children go inside with family and go make wine in the old way. Of course, now, we started a new cantina with modern technology, but for us it was tradition, the wine was ready in December, in January, and also after this day was of course a big party. Because we invite all the family for nice Sicilian food. What's important is of course, our wine and the combination with food.

So the EU banned the use of palmento, but there's some producers now that are fighting to bring palmento back. Do you have an opinion on that?

Yes. My opinion is that this will be very difficult, because with the hygienic norm, the new way of certification, that maybe it's impossible.

And in terms of the growth of Etna internationally, how do you feel the small producers are being included in this massive growth?

How is it living in the shadow of a volcano?

For us, we have good feelings with volcanoes. Since this is part of us, also part of the vineyard. It's a natural situation that you can't change. So we stay living with the volcano. And another thing I say always, we are very happy with the volcano because it protects us from the sirocco, the hot wind from Africa. And this is for the grapes, very important. 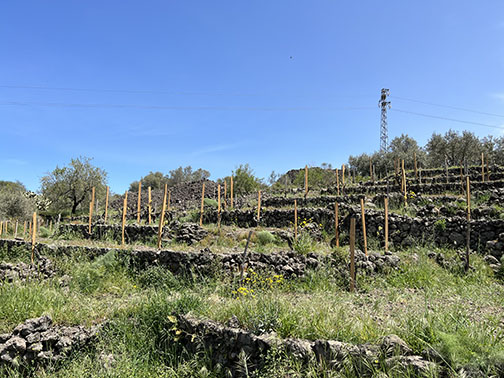 And what are some of the challenges of the volcano?

The negative side is, for example, when there is a lot of ash in the summer and it's hot, it's not good for us. So you have positive and negative sides.

And there's something kind of emotional about the volcano that brings people from all over the world to Etna.

Yes, we are very happy with this, because you can speak about different languages, about different people that come here together. And what we hope is that all the people don't change things too much, but go inside our tradition. And this is the wine, the food, of course, the sun, the sea, because we are 20 kilometers also from the sea.

And so Sicily is very unique in that it's been conquered by so many different countries over the years; the Romans, the Greeks, the Goths, the Normans, the Spanish, the French, the Turks. How do you see that?

And what do you think is most special about Etna wine?

The elegance, the finesse, and of course, the most important is the climate. The climate is incredible. On Etna you see now we have much sun, but tonight it is cold. So the difference in temperature between day and night is very important. And of course, our friend, the volcano, our minerality, this is really, really unique.

And you have some old vines, correct? How do the old vines contribute to making a unique wine?

Yeah. The old vines are very important for us, of course, for the characteristics, for the elegance, for the longevity, they're very important. And with some parts of the Feudi di Mezzo, we work, for example, on an Etna Riserva, because now you can make an Etna Riserva Rosso. And with some parts, we go and look with our winemaker for our new products. For example this year, we started with a spumante of Nerello. 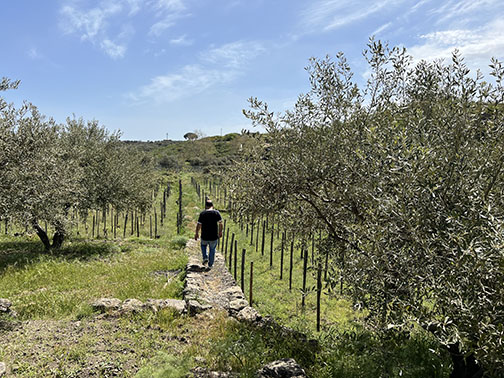 The community of small producers is a very big collaboration. One good example is for example, that two years ago, we worked together with the Consorzio and we stopped the quota, so that not everybody can take more quota here. And so we don't want to expand the Etna DOC to outside what it is now.

Why is that? Why do you want to keep it in the same area?

Because we think that Etna wines on the top must stay a little bit exclusive.

And maybe talk about how the volcanic soil influences the wine itself. The taste of the wine.

The volcanic soil is very important. It influences the wine with many different characteristics. Also, our stone is porous, it takes water. And in the summer, we need the water. So it's very, very, very particular ground. We often speak about minerals in the world, but here is one volcano with the two, three big craters and each week you have an explosion.

And people have compared Etna to Burgundy in the sense that you have many, many microclimates that create very individual styles of wine.