A Guide to Drinking In Colonial New England

Jameson Fink
Tags: madeira colonies , history of bars in us , colonial us drinking 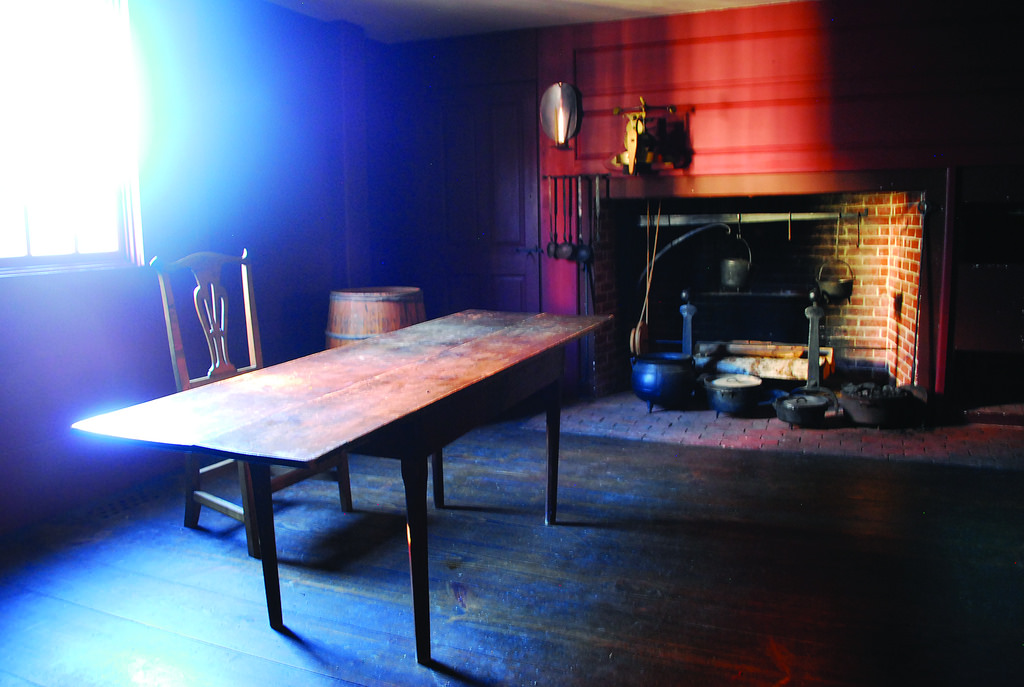 Today we can get wine, and any other alcoholic beverage, from all over the world and with ease. But what was drinking like back in the 17th Century? I turned to Corin Hirsch, author of "Forgotten Drinks of Colonial New England", to help time travel back a few hundred years.

Colonial New Englanders “practically swam in a sea of booze from breakfast ‘til bedtime.” So if I was teleported back to those times, what would my drinking day look like?

You might start the day with a bracing, pre-dawn dram of bitters, perhaps infused with juniper berries, mugwort or spicebush berries. If you were a student at Harvard University, beer would be given to you with breakfast, as the school has it’s own brewery. If you were anything like John Adams, you’d start the day with a tankard of hard cider. More tipples might come in the late morning, and farmers might sip hard cider, small beer or switchel throughout the work day. At home, cider or beer would appear again on the supper table; men might retire to the local public house to drink more beer, wine, or rum drinks such as grog or flip — exchanging news and smoking clay pipes by the hearth.

What role did Madeira and sherry play among European settlers?

Fortified wines were integral to the tavern culture in larger cities such as Boston and Philadelphia. Madeira was famously “discovered” when a barrel of lightly fortified white wine from the island of Madeira was accidentally left in the hull of a ship as it circumnavigated the globe. The wine had gained appealing caramelized flavors from the journey, and Madeira became a “thing” both in England and, later, colonial cities. Because it came from a colony, Madeira also avoided many of the taxes and duties that the British tacked on to European-produced goods — Madeira was not technically part of Europe — so it was seen as a more “democratic” drink than French-produced wines. Benjamin Franklin was a big fan, and Thomas Jefferson was sipping it as he wrote the Declaration of Independence.

What was the wine scene like in 17th century New England?

The wine scene in 17th century New England had multiple faces. Sadly, colonists up and down the coast could never really get their own wine industry going; despite the fact that wild grapes grew abundantly in the New World, they yielded sour, clunky wines, and vinifera never took well to the unfamiliar landscape and extreme climate. Yet imported wines — usually French claret and Canary wine — were offered in some urban taverns, and Burgundies and other bottles filled the cellars of men of means. Thomas Jefferson springs to mind — his cellar was legendary, though he never had luck at making wines that were up to his standard.

Why were early efforts at making wine from grapes such a failure? Did settlers have better results using other ingredients for wine?

They were dealing with both unfamiliar terrain and a climate that was much more extreme than in European wine growing regions. Mildew and pests were a perpetual problem. It seems we’ve only figured out East Coast wine within the last 20 years or so — centuries later! In rural parts of New England, colonists had much better luck with fruit and other plant-based wines. Rhubarb, gooseberries, berries, and dandelions would all be used to make wine.

What wine-based cocktails were popular among the colonists?

Sangaree, a precursor to sangria, which was essentially red wine with spirits (often rum, brandy or both), fruit juices and spices; and posset, a blend of white wine, cream and/or eggs, lemon, and spices. It’s a quirky drink — tastes a bit like sour egg nog.
Your Twitter profile reveals you are “runnin’ on maple kefir and Chinon”. What is it about Loire Cabernet Franc you find so sustaining and appealing?

I first tasted Chinon on a family trip to the Loire, from a bottle that the proprietor of our rented cottage had left for us. It was unlike most red wines I had tasted up to that point — rustic and uncomplicated, but still supple, and alive with violets, red fruit and hints of tea. My Chinon epiphany may be partly due to the fact that my palate was conditioned on Long Island, where I grew up; I tasted many rough iterations of Cab Franc as I came of age. (Those wines are a lot better now). I’m fascinated by what a chameleon Cab Franc can be; it’s so expressive of time and place. Once I discovered Chinon, I began seeking it out obsessively; I love Bourgeuil and Saumur-Champigny, too, but not nearly as much. Chinon is like the quiet coworker who flies under the radar until you take a good, long look at her — and you realize how incredibly beautiful she is. I have a sense that might be a cheesy metaphor, but there it is.

Also, get Hirsch's recommendations on where to eat and drink in Burlington, VT, as well as some Vermont wineries and grapes to try.