With reports that Sir Winston Churchill consumed an astounding 42,000 bottles of Champagne in his lifetime, Grape Collective decided to take a look at the drinking habits of two of the most important leaders of the 20th Century, Sir Winston and FDR. Known for his love of champagne, Sir Winston Churchill was not ashamed to admit, “I drink champagne at all meals, and buckets of claret and soda in between.”

Often seen with a whiskey by his side, the notoriously heavy drinker enjoyed drinking brandy and champagne both with lunch and dinner. His favorites included Hine brandy, Pol Roger Champagne, and Johnnie Walker Red Label Scotch. In fact, he claimed the four essentials of life to be: “Hot baths, cold champagne, new peas, and old brandy.”

As a young man in India and South Africa Churchill began adding a dab of whiskey to dirty drinking water to disguise the taste and prevent disease. This habit continued throughout his life and every morning he sipped from a glass of Johnnie Walker and water, affectionately called the Papa Cocktail by his daughter. 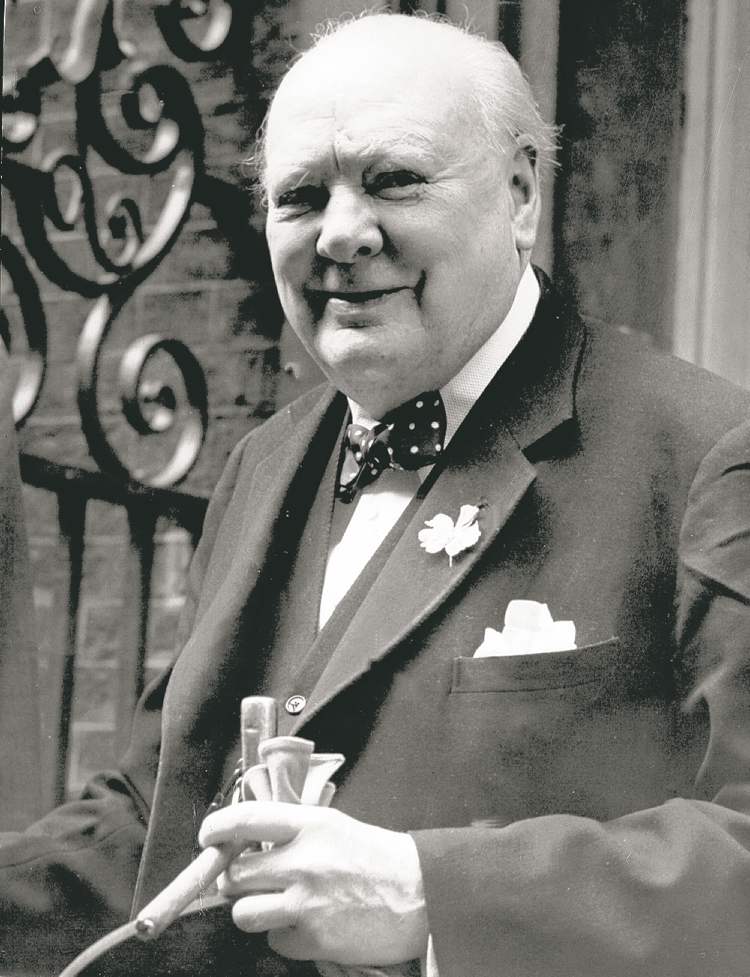 Even as Prime Minister, Churchill’s drinking habits continued. He believed Europeans respected leaders who could hold their liquor, so he didn’t try to hide his drinking or discourage the rumors regarding his alcohol consumption. Biographer William Manchester wrote, “There is always some alcohol in his bloodstream and it reaches its peak late in the evening after he has had two or three Scotches, several glasses of Champagne, at least two brandies, and a highball.”

Known for his wit and sense of humor, Churchill often made light of his drinking. When accused by a fellow Member of Parliament of being “disgustingly drunk,” he shot back by calling her “disgustingly ugly." He added, “But tomorrow I shall be sober and you will still be disgustingly ugly."

Another classic witty retort by Churchill was made while visiting King Ibn Saud of Saudi Arabia. Winston was told that during a banquet held in his honor he would not be permitted to drink nor smoke, due to religious reasons. This did not sit well with Churchill and so he informed the King, “My religion prescribes as an absolute sacred ritual smoking cigars and drinking alcohol before, after and if need be during all meals and the intervals between them.”

Thus, it’s no secret Sir Winston Churchill enjoyed his drink. But what about his contemporary, FDR? In 1932, Roosevelt ran on an anti-prohibition platform and when he moved into the White House, he kept his word. With FDR leading the way, Congress passed the 21st Amendment, repealing the 18th Amendment and bringing booze back into American life. Once the 21st Amendment was signed and ratified, Roosevelt famously remarked, “I believe this would be a good time for a beer.”

While FDR’s efforts to end the Prohibition are widely known, his personal drinking habits are not extensively documented. History shows FDR was indeed a drinker, but to what extent is up for debate. In his 2003 biography, That Man: An Insider’s Portrait of Franklin D. Roosevelt, cabinet member Robert H. Jackson recalls “Before dinner we usually had martini cocktails made by the President’s own hands, but any impression that the President was given to any considerable amount of drinking... is a mistake. I never knew him to take more than a couple of cocktails, nor did he want anyone about him who drank to excess. He aimed for two cocktails before dinner and then perhaps a smidgen afterward.” 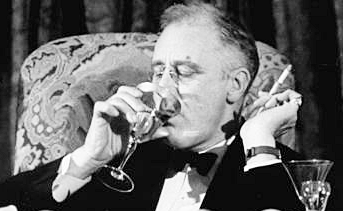 FDR is remembered for enjoying a few martinis, much to his wife Eleanor’s dismay. Alcoholism ran in Eleanor’s family, and she steered clear of booze. To placate her, Roosevelt emphasized the importance of moderation and told his kids, “A gentleman learns his capacity and tries not to exceed it. If he must drink to excess, he does so when he has no call to be in touch with anyone else.”

When it came time to relax, FDR would often retreat to his New York estate where he would host social gatherings, toss a few back, and take the opportunity to play bartender. He invented the “Haitian libation," a concoction consisting of dark rum, brown sugar, orange juice, and an egg white, shaken and served in a frosted tumbler. According to his son Elliot, FDR developed this drink for “women companions” for “when he wanted them to feel frivolous.”

Roosevelt’s martini recipes have also been well documented, and usually with poor reviews. Many disapproved of his overzealous use of vermouth; others disliked his choice of mixers and garnishes. According to his grandson Curtis, most people didn’t appreciate the president’s bartending skills and it’s even on record that “the president made the worst martinis ever tasted.” 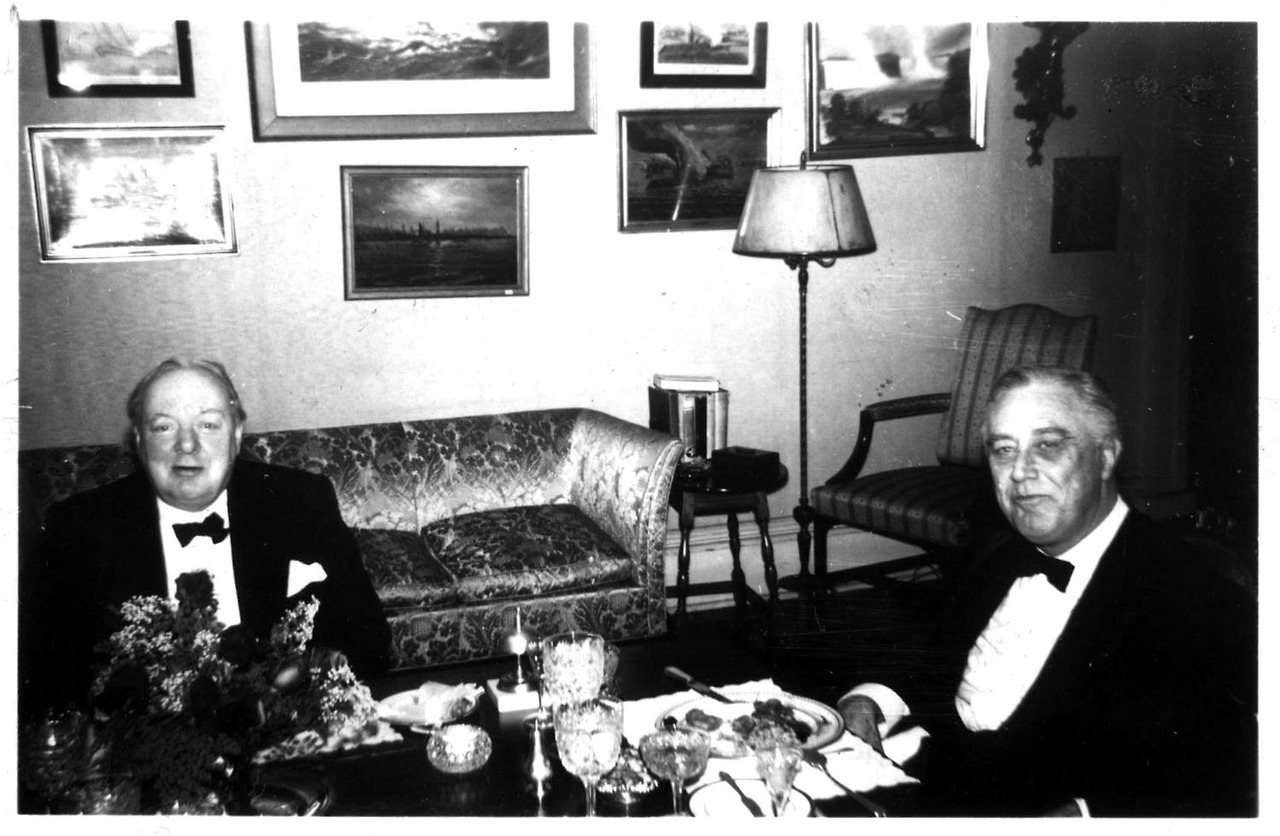 As for the leaders' time together? FDR hosted Churchill at the White House for several weeks during WWII. According to Roosevelt’s wife Eleanor, the president informed her she “must see to it that we had good champagne and brandy in the house and plenty of whiskey.”

Left: A typical dinner between these two — this particular one at the White House — consisted of much glassware. (US National Archives and Records Administration)

It has been reported that the president joined in on Churchill’s notorious benders. Staying up all night drinking brandy and smoking cigars, FDR happily took part in what White House staffers dubbed “Winston Hours.” Afterward, FDR supposedly slept 10 hours a night for 3 nights in a row in order recover.

Learn more about the drinking habits of Churchill, Roosevelt, and other famous figures at Modern Drunkard Magazine.