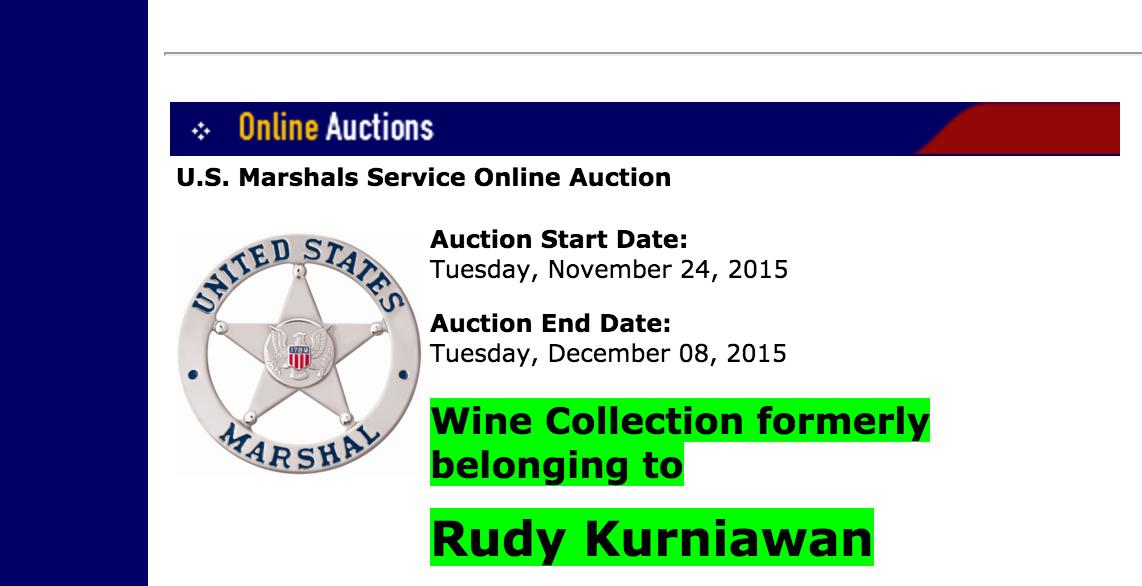 Two years have passed since a federal jury convicted Rudy Kurniawan, a prominent wine collector, of fraud for selling counterfeit wines. When the FBI raided Kurniawan's home in March 2013, they discovered thousands of fake wine labels and hundreds of bottles and corks. He's currently serving a 10-year prison sentence.

Kurniawan's conviction brought attention to the scourge of counterfeit wines. It also forced the auction industry to clean up its act and dedicate more resources to authenticating old bottles.

But wine enthusiasts remain on edge.

Kurniawan showed how much money could be made with fake wines. At a single auction hosted by Acker Merrall & Condit in 2006, he netted nearly $25 million. Plenty of Kurniawan's concoctions remain in circulation. And suspect wines continue to surface. Last month in Hong Kong, for example, a new auction house called Dragon 8 pulled many lots from its debut after counterfeit experts raised serious concerns on WineBerserkers.com, an online bulletin board.

Some have argued that wine fraud is a victimless crime. Wine writer W. Blake Gray called Kurniawan a "hero" since "the wine-auction scene is full of powerful assholes." But fake wines take a toll on everyday consumers -- those passionate oenophiles who can't afford cases of grand cru Burgundy or first-growth Bordeaux but can afford the occasional splurge on a single, special bottle.

Brooks grew up in a house where wine -- typically sweet, simple, and German -- was often on the table. One Christmas, his father received a case of wine from his company. It was a dry red, and year after year, Brooks's father tried to serve it with holiday meals. But Brooks and his mother kept saying no, sticking with the simple white instead. Eventually, his father drank the wine on his own.

After Brooks caught the wine bug, he realized that the wine his father kept trying to push was 1961 Château LafiteRothschild. Of Bordeaux's five first growths, Lafite is the most famous. Arguably, 1961 is Bordeaux's greatest vintage ever.

In 2012, the first Father's Day without his dad, Brooks realized that some of his grief was tied up with the wine -- and the missed chance to drink something so legendary with his father. But he then realized that it was also an opportunity. If he ever had a chance to drink 1961 Lafite, it would offer one more moment with his dad.

In late 2012, Brooks might have had that opportunity. But he'll never know.

"I was drinking my way up the California coast with my wife and we went to dinner at a restaurant in Santa Barbara County. I looked at the wine list. There it was. 1961 Lafite. $1,300. I was so tempted. It was my chance to drink it 'with my dad,'" he explained.

"But could it be real? There were a few older wines on the list, but not many," he continued. "And while the restaurant was associated with a small wine shop, this was not the French Laundry. It was just a nice little restaurant. After all the publicity about counterfeit wines, I feared the chances it was real were not very high. For a one-time opportunity to share that wine with the memory of my dad, I would have gladly paid $1,300. But after agonizing, I decided I could not risk paying $1,300 for something that wasn't real."

Brooks's story tugs at the heartstrings. But similar stories abound.

One recent night, a friend opened a bottle of Château Latour -- another first growth -- from 1974, his birth year, for a small group of us. The wine was shockingly fresh, though. So we concluded that it must have been a fake.

With old Burgundy, one can't help but question the authenticity of virtually every bottle.

Billionaire wine bidders might never warrant deep sympathy. But the wine world is packed with passionate enthusiasts of humble means -- geeks who live in cramped apartments, dress in outdated clothes, and seem to spend all their income on wine -- who eagerly share their most prized bottles.

These consumers chase history's greatest wines, knowing that sometimes, such wines can offer spiritual experiences. But today, with so many counterfeits on the market, it's becoming harder and harder to figure out what's real. That's a shame.