Muscadine: The Grape of the South 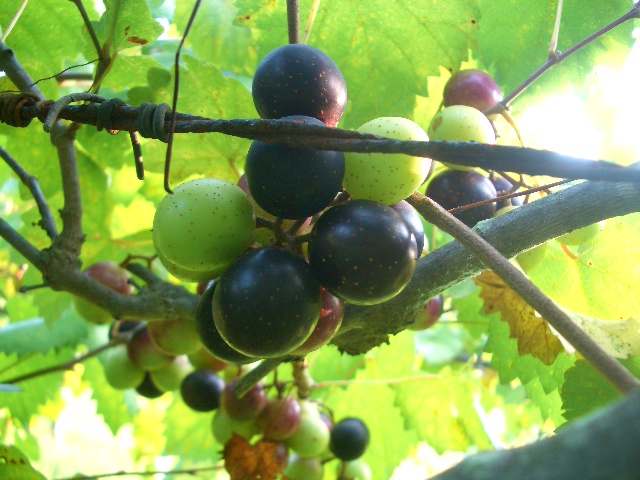 When Tim Watkins was 15 years old he would sneak bottles of homemade Muscadine wine from his great uncles. He grew up between the small, Maycomb-like Alabama towns of Tallassee and Notasulga in Macon County. His great uncles would go into the woods that surrounded their home, pick grapes from the vines that grew wild in the woods, and then ferment the juice on the porch.

Three years later, Watkins and his friends continued the tradition and made their own 5-gallon bucket wines from the wild Muscadine grapes that surrounded them.

Homemade wine in the South is as storied a tradition as it gets. It was likely a Muscadine wine that David Lee Murphy dusted off from Creal Williams in the song “Dust on the Bottle.” It inspires country songs like “Love You Like That” by Canaan Smith today with its notorious Kool-Aide-sweet taste.

The wild Muscadine grapes that Watkins and his family used for their homemade wines and that country singers have sung about throughout time are the same species of grape that the first explorers of America were impressed by.

The North Carolina Department of Agriculture and Consumer Services have researched the history of America’s first cultivated wine grape. The earliest written record of the grape traces back to 1524, when French explorer Giovanni deVerrazano wrote that he saw, “Many vines growing naturally there that without a doubt would yield excellent wines,” in present-day North Carolina.

Today, however, Muscadine wines have somewhat of an inferiority complex when compared to Old World wines.

Ask Watkins, who has turned his front porch homemade wine making into the commercial Muscadine winery Whippoorwill Vineyards, about the importance of the grape to Southern culture. His likely response will be an offer to sit in a rocking chair on the porch and talk over a glass of his Muscadine wine.

“In the South, there will always be interest in Muscadines,” Watkins said. “When I get customers in there they start telling stories of their grandparents when they was little making wine on the back porch. It’s a Southern tradition of making and eating Muscadines.”

Current Alabama laws prohibit Watkins from shipping his wine out of the store. Current laws won’t even let Watkins distribute his wines to restaurants. Watkins sees Muscadine’s popularity hinging on two factors: competing with the marketing of old world wines and changing the dated regulations.

Wine drinkers have been trained to believe that serious wines are dry and red, leaving the sweet-as-sweet-tea Muscadine wine to be thought of as a beginner’s wine. And while Watkins started making wine in the drier style that he preferred, he has switched back to producing sweeter wines to accomodate popular demand.

Flavor and location on the world map aren’t the only things differentiating Muscadine wines from their distant Old World cousins. They are different down to a chromosomal level.

The Vitis genus is divided into two subgenera.There is Euvitis, which includes traditional Old World Vitis vinifera varieties, and there is Muscadania. Euvitis has 38 chromosomes, Muscadania has 40. Euvitis grapes can be sold to wine producers for a relatively high profit, Muscadania grapes destined to be processed into wine or juice have traditionally sold between 10 and 20 cents per pound.

Yet the science behind making a Muscadine wine is no different than making wine from Old World varietals.

“It used to be winemaking was an art,” said Ed Rocereta, pharmacist-turned-winemaker at Georgia’s Warm Springs Winery. “This is the way dad did it, Egyptians did it, and the Samaritans did it. Now a day it’s quantitative rather than qualitative. But we still make it according to art.”

Rocereta doesn’t have deep roots in wild Muscadine grapes. He is originally from Pittsburg, Penn., and started selling Muscadine wines commercially about four years ago. He explored the Muscadine wine options from left to right before producing his own, and took into account his own wine taste preferences as well as the local proclivity for sweet wines.

Rocereta allows for full fermentation, and then adds less sugar than many of the surrounding Muscadine wineries. He also breaks Muscadine wine tradition by blending his Muscadine wines with non-Muscadine grapes for a wine that ends up with more tannins and an oak flavor. Warm Springs Winery’s top selling wine, however, is far out in left field. Named “Hotlanta,” after the city of Atlanta’s nickname, the best seller knocks unusual wine tastes out of the park with hints of jalapeño. All of Warm Spring Winery’s wines, from traditional to experimental, are based off of the Muscadine grape.

“The Muscadine grape doesn’t get a lot of respect because America and New World countries are brainwashed to think that only European grapes are good,” Rocereta said.

American’s are taught to not like sweet wines, said Rocereta, but Italy’s sweet wine export, Moscato, is one of the highest selling wines in the country. Italy’s Castello del Poggio Moscato was the top selling wine under $15 in 2013.

University of Georgia, Mississippi State, University of Arkansas, North Carolina State University and others all have research teams and classes devoted to the Muscadine grape. But it will take more than research to lift the stigma of sweet Muscadine wine. While Muscadine wine remains a Southern staple, the perception of the wine and the legal situation relating to distribution must change before the rest of the wine drinking population is exposed to an American wine made from American grapes.

“Once we can get our wine to people across the state the market can really open up,” Tim Watkins said. “But there’s a lot of ifs in there.”