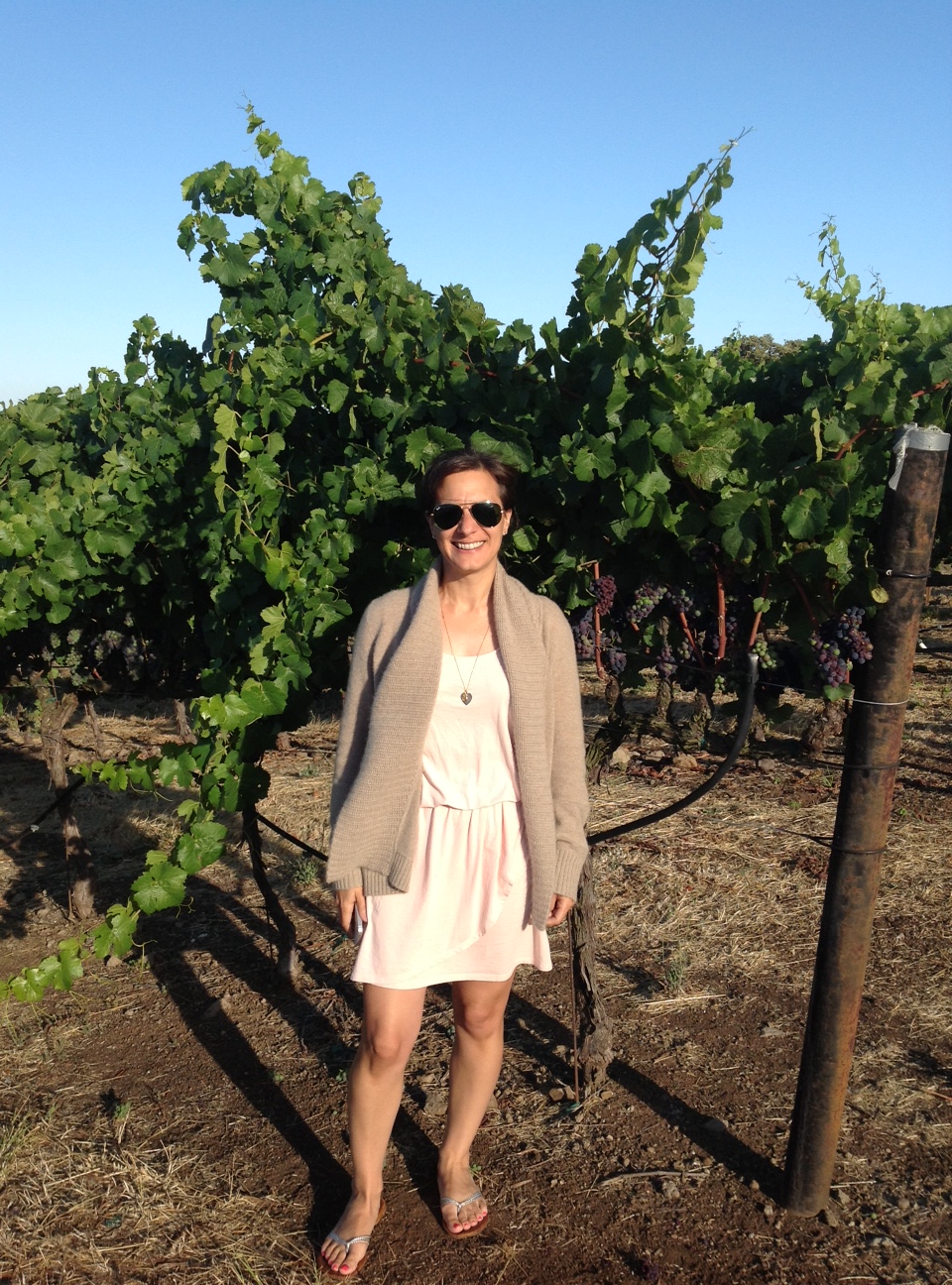 It isn’t every day that an entertainment magazine editor and MTV producer shifts to the grape and falls in love with wine, but Alyssa Vitrano is the exception. Her blog Grapefriend takes readers through the pop culture, enjoyable and fun side of wine that the overtly serious drinkers just don’t understand. Her perspective is fresh, her writing is lively and her insight into the mindset of the every day wine drinker is acculturating. Enjoy our revival of the SpeakEasy series of interviews with wine bloggers.

Let’s start from the beginning. Why did you want to create Grapefriend?

I've always been into wine, but when I started studying at the American Sommelier Association I was getting all of this information and wanted a way to relay it to people. I'd go out and have wine with my friends, and they drank wine all the time, but knew nothing about it. So I started thinking about why that was – you wear clothes every day and have your favorite designers or styles, but you might drink wine every day and not know the difference between Chardonnay and Sauvignon Blanc. I realized that there wasn't much wine writing out there that was fun and not crazy detailed and technical. I was an entertainment editor and producer for years, so I thought about what I knew – pop culture and wine – and decided to merge the two subjects to try to make learning about wine as fun as when you're drinking it.

This was about 5 years ago, when Facebook was the dominant social media channel, so I started a Facebook page and would post pictures of all the wines we were tasting in class. But I also wanted to start a blog because I missed writing and having a creative outlet. And then everything grew from there, both on the blog and on other social media channels. Now Instagram is my biggest channel – it reaches more people than even the blog, and has the most engaged following! I love being able to virtually talk to people one on one and answer their questions, or just share our huge love of wine.

Was their a specific “aha” moment that changed things for you?

Not one specific moment, more a string of them. When I'd go out with friends, I had one friend who always ordered Pinot Grigio and another who'd always order Pinot Noir. They never looked at a list and, even if they did, they didn't know what any of the other grapes were. So I wanted them and everyone else who had their go-to grape to branch out and explore all of the other amazing wines out there.

Do you believe your previous experience in entertainment media gives you a unique perspective on the wine world?

Absolutely! People who love entertainment are a far bigger group than those who love wine, so I do a ton of my wine coverage through the lens of pop culture. It was a unique way to get people's attention. Plus, it really shows the wine and how people are actually drinking it. On Instagram I don’t do bottle or label shots, but show the wines in a context of how and when you actually drink it – by the fire, on the balcony, watching football.

I was a writer for over a decade, so I really honed my voice then. By the time I started Grapefriend, I'd already developed the fun, very conversational style of writing I do. I had regular columns for Marie Claire and Cosmo, and when I freelance I sometimes tone down the casual aspect a bit but I still always keep it approachable and fun.

The intersection between wine and popular culture has always been interesting to me. Wine has always been a status symbol in all forms of media, but do you see it changing as wine becomes more mainstream and more and more people become knowledgeable about wine?

Definitely. I can't STAND when people say that drinking wine is "fancy" or anything like that. It can be drunk on a Tuesday while you're home in your leggings watching TV, it’s not just for special nights. Now, granted, a ton of wines are really expensive, so you're not going to be able to just pop them open every night, and those can be saved for fancy times. But I think the attitude of having wine is becoming much more that it's a whenever you want it thing rather than just for special occasions. Everyone now can drink any day of the week, and tons of people tag me in their photos not just on Christmas or New Year’s, but just when watching "The Bachelor" or out to drinks with their friends.

Two shows are hands-down the best alcohol-soaked series. "Mad Men" was amazing for cocktails of course. But interestingly enough, they drank more and more wine as the series went on into the 60s, which was a truly accurate reflection of what people were drinking in the US at that time. We were a cocktail culture that slowly evolved into a wine culture once Napa began to produce more wine in the 60s. On the blog, I used to do a wine count for every single episode of "Mad Men" to chart who drank cocktails vs wine, and how many glasses were drunk. (Megan was the biggest grapefriend – she and her parents were French Canadian and drank lots of wine.) The second series that's done a ton for grapefriends all over the country is Scandal. Olivia Pope pours out massive glasses of red and shares a love for grapes with her evil dad and a few friends at the White House. Sadly the wine they have her drink on the show is called California Oak and is 100% fake. On the blog every week, I had one of my best friends write about the plot because she was more into the show than I was, and I'd suggest what actual wine Olivia should've drunk for that moment.

You haven’t been writing as much about television and wine as of late. Is there a particular reason and do you think that you will do more in the future?

Sure! Mad Men ended last year, and that was really exhausting, so it was nice not to have a commitment like that every week. And Scandal was fun for a while, but since they don't drink specific wines it sort of becomes the same thing over and over. We did it for about two seasons but honestly we both just weren't that into the show anymore. It's my blog, so if something starts feeling like a chore I don't have to keep doing it. Benefits of being in control!

Wine writing isn’t always the most entertaining. What type of wine writing do you read and why?

Very little. I read up on stuff I don't know much about if I'm trying to learn about it – like orange wine or biodynamics or a lesser know region. But it's all technical and can be dry, so it's just a way for me to learn and not about being entertained. I like Food & Wine's coverage – it's accessible and often entertaining. But the fun stuff is what Grapefriend's for!

What is your go-to wine?

Pinot Noir. I'd drink Burgundy every day if I could but it can get really expensive. The ones from Oregon are still very good and affordable though. I usually drink a glass of wine after work on its own, so I need wines that don't have to be complimented by food – even a Cab Franc or Trousseau, which I'm newly obsessed with. In the warmer months, Pinot Gris and rosé are usually in my glass.

What advice would you give other people looking to get into wine?

One way and one way only: Drink! You can go down the more academic rabbit hole like I did, but it's really not necessary. You just need to taste a lot of wines and think about it when you do – what do you like about it? Try to learn a few key, basic elements of wine that you can articulate to a waiter or person at the wine store. Do you like full or acidic whites, heavy or light reds, minerality or fruitiness? Any vocabulary you can use will help people get you what you like. My other tip is that if you're sitting at a bar, ask the bartender to pour you two wines you're thinking about getting. They're almost always willing to, and the better ones will be psyched to talk you through them. It's really helpful to be able to compare wines side by side to figure out what you like best.

Finally, what do you suggest that people who are interested in learning more about or writing about wine do?

If you want to get into writing about wine, I'd just say you have to craft your own unique take on it. There's so much out there now, way more than when I started out, and of every variety – from super technical to jokey and barely knowledgeable. But as with anything, you have to realize what your own natural passion is, about wine or any subject, and build off of that. No one else will be able to duplicate what you're doing if it's truly your own.