If you have heard about the Salina or Lipari islands, then it is probably because of their delicious Malvasia passito: dessert-style wine. 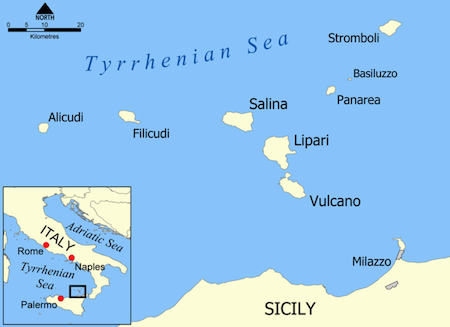 Salina, Lipari, and the whole gang of islands -- Vulcano, Filicudi, Panarea, Stromboli, and Alicudi -- are pocketed in between Sicily and Calabria, hovering the Strait of Messina along the southern edge of the Tyrrhenian Sea. But the Aeolian Islands, as they are collectively named, have a lot more to offer than sweet wine.

The series of Aeolian Islands make up an arc of volcanoes that are the result of the continental collision of Europe and Africa. The volcanoes of Vulcano and Stromboli are still active and their sites are quite unique. You can slather yourself in a hot, sulfur-infused, mud bath or glisten away in geothermally warmed sea waters alongs the coasts.

Volcanic activity on the Aeolian Islands has made its soils very rich and fertile for agriculture. With soils composed of tuff, obsidian, ash and sand, capers and olives flourish throughout and give opportunities for farmers to develop a strong relationship with the land. 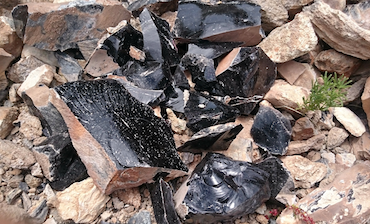 Malvasia, but also Carricante and a curious red grape called Corinto Nero are traditionally grown. All these grapes make up Malvasia delle Lipari, of which the world has had a historic fondness. Passito wine production on Lipari dates back to the classical period. People have lived on these islands for thousands of years making passito wine.

The Aeolian Islands are “more old than new.” Lipari is the largest, most-populated and best-known island, whereas Salina is smaller in comparison. Both islands are excellent areas to grow grapes, but there are only a handful of commercial producers, and Nino Caravaglio is among those in the center. He traces his viticulturist practice through his family lineage and connects it to the history and culture of the island.

Grape Collective sent a series of questions to Nino Caravaglio by email:

Marco Salerno: You founded the company in 1989. What was the turning point?

Nino Caravaglio: The farmers of the Aeolian Islands used to produce bulk wine and capers that were then sold to intermediates. What changed in 1989 was that I decided to complete the production chain by bottling the wine and packaging it to be able to sell it directly. This was the turning point that changed the firm.

How are the terroirs of Salina and Lipari unique compared to the other Aeolian Islands and compared to Sicily?

If we intend the terroir as a series of pedological factors, the differences between the various Aeolian Islands are very few because they are all volcanic. 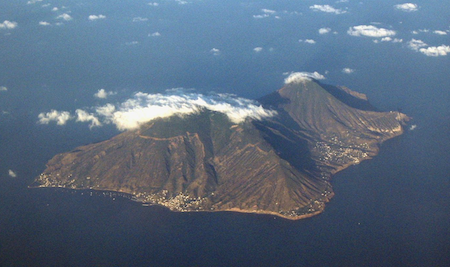 If, on the other hand, we intend the terroir as a combination of pedological and climatic factors then the island of Salina is unique. The island of Salina is formed by two mountains which are the highest of the Aeolian Islands and act as water collectors. Salina is the greenest island of the archipelago because it is able to withhold water in its soil. As for Lipari, the vineyard we have is placed in a very specific spot, which is an ancient volcanic crater. What makes this place so special even compared to the rest of Lipari, is the composition of the soil, with sand, ashes and pumice. This protected the vines from the phylloxera, thus preserving the original local plants that are ungrafted.

(Photo, above: An aerial shot of Salina)

Compared to the rest of Sicily, the Aeolian Islands are very rich in potassium which confers the sweetness to the final product.

Malvasia, Nerello Mascalese, Corinto Nero, and other local grape varieties. Please describe the soils where your 30 vineyards lay and how these grapes are cultivated.

The vineyards we own are very different from one to the next. Because of the volcanic nature of this area there is a great amount of layers of soils of different kinds. We have vineyards that are sandy and others that are rich in clay. The altitude also changes. Some vineyards are at sea level and our highest ones are in a valley between the two mountains of Salina, which is about 500 meters above the sea level. Some parcels face west others east and others north. There is a great variety of elements combined differently. As for the type of agricultural practices we have always been certified organic since 1989.

Corinto Nero is a relatively rare grape variety that seems to be gaining attention. How is the relationship with Corinto Nero different than the more famous Malvasia?

Currently the Corinto Nero is produced only at the Aeolian Islands. It is a variety of Greek origins that was introduced by Venetians, together with the Malvasia, in the late 16th century. At the Aeolian Islands it has always been used to make the Malvasia passito, where 95% is the Malvasia grape and 5% is Corinto. In Lipari and Stromboli the Corinto Nero was also planted to make raisins called "passolina," given the fact that it is a variety with small berries that don't contain seeds. In each cluster only about five to 10% of the berries are larger than the others because they contain the seeds. It is amazing to think that our ancestors actually selected the berries by hand to separate the seedless ones in order to make raisins and the larger ones to make wine!

What kind of character do your wines have in the glass?

No selected yeast are added, local grape varieties are used, organic farming is applied and great value is given to the location of the various vineyards on the islands, in order to “collect” the distinctiveness of a layered volcanic land. This way the result is a product that is quite unique and well represents the terroir. A few elements that our nine wines have in common are the minerality, given by the rich soil’s composition, the savory notes, given by the combination between the terrain and the weather. Undoubtedly the presence of the sea has an effect as well. The land here is very rich in potassium, iron and magnesium.

It has been said of the Infatata: “Very clean taste. Jasmine, apple, citrus and herbs on the nose. A vertical and fresh wine, quite savory.”

Occhio di Terra Malvasia: “It is a macerated wine. It presents a very complex scent in which you can find various minerals, sweet notes and aromatic herbs, with fruits and Mediterranean shrubs. The richness persists in the mouth, freshly savory.”

You also passionately produce capers. Why are capers so special to Aeolian Islands? How can US consumers better understand the tradition of caper production?

The caper is a Mediterranean shrub that grows wild but has been farmed on the Aeolian Islands for millennia.

As a branch grows, it produces new capers on its tip, and the ones left behind become larger until eventually they blossom. 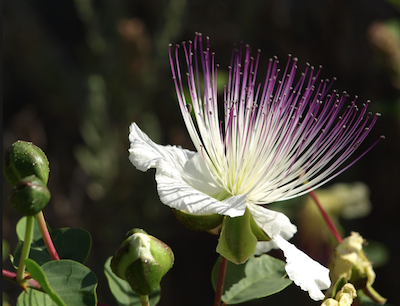 The central stigma of the flower keeps on growing even after the petals wither and it then becomes a caper-berry, containing the seeds. Both the flower buds and the berries are edible, once they have been cured in salt.

The flower buds are picked, by hand, from early May until late July. Each plant is returned to, once a week.

As soon as they’re picked, the capers are then laid out on fabric, under a porch, in order to let them release heat, because being green they start fermenting right away. After about 12 hours, the capers are placed in large containers, layered with abundant sea salt. During the first week, the capers are carefully moved often, from one container to another, adding new salt and airing them, in order to collect the liquid that forms. After a month and a half after being harvested, the capers are ready to be used.

A machine is used to delicately sift them into the three different calibers that then get packaged by hand in polyethylene bags or glass jars. The capers may also be desalted in water and vinegar to then be preserved in wine vinegar or extra virgin olive oil with fine herbs.

Practically all of the process has to be done by hand because of how delicate the flower bud is.

The variety we use at the Aeolian Islands is called “Nocella.” What is unique about our way of farming it, is that we have a very ancient tradition of the delicate art of reproducing capers by plant cuttings instead of planting the seeds. This has allowed us to carry out a genetic selection of the best specimens. The price to pay is high because only about 20% of the plant cuttings are successful, but the resulting plants are of very high quality and are perfectly harmonized with this land, not needing any type of fertilizers, pesticides or added substances of any kind. Pruning the shrubs is also a knowledge that is fundamental and has been passed down through generations of Aeolian farmers.

The capers from the Aeolian Islands present a bright green color with pinkish stripes, a full round shape and a plump, firm and crispy consistency, with a gorgeous scent.

What is your company’s goal through the cultivation of wine and capers?

Through my activity, I would like to contribute to the preservation of the agricultural tradition on the Aeolian Islands and be a source of labor for young farmers.

Your family has been residents on Salina for a long time. What has been the biggest change to the island’s culture in your time?

The economy and culture of the island of Salina has always revolved around agriculture. It still does. The arrival of tourism starting having a large impact in the '80s, but the culture is still essentially peasant. Selling bulk product started losing its convenience when more and more competition appeared on the market. That is when people started turning to tourism, which has a seasonal cycle that coincides with the agricultural one (from May to September). But when more and more farms evolved into realizing a final product ready for sale, the agricultural activity found a new impulse.

What is next for Aeolian Islands viticulture?

The numbers are currently growing. As long as we keep true to what makes us special, which is the uniqueness of our territory, grape varieties and farming techniques, the amounts produced will always be limited and have a market of interested connoisseurs.