The Grower: Andy Beckstoffer On Cesar Chavez and California Cabernet's Next Frontier

Andy Beckstoffer is Napa's pioneering grape grower. He has been managing vineyards in Napa Valley since the 1970s and has been one of the significant figures to who have overseen Napa's rise from a sleepy farming community to a world class winemaking region. A leader in promoting sustainable winemaking through innovations such as drip irrigation, vine spacing, bench graft production, vineyard technology and farming management that have significantly improved wine grape quality, he has also been a mediator in working through labor issues with farm workers, maintaining the community's cohesiveness in the face of growth and development. Today, Beckstoffer Vineyards owns and farms over 3,600 acres in three Northern California winegrowing regions – the Napa Valley, Mendocino County and the Red Hills of Lake County — and his holdings include two of the Napa's most famous vineyards: To Kalon and George III. In 2010, Andy became the first grape grower to be elected to the Culinary Institute of America's Vintners Hall of Fame.

Grape Collective recently caught up with the forward-thinking farmer to talk Cesar Chavez, picking out the best locations and land, and why Beckstoffer never felt compelled to make any wine himself.

Christopher Barnes: How did you get involved in the wine business and how you ended up in Napa Valley?

Andy Beckstoffer: When I got out of graduate school, I went to work for a corporation in the east, and I got the job in 1968 of analyzing the premium California table wine business, and in those days, the only two premium wines were Almaden and Paul Masson. We did a big study, one of the things we looked at was how do you be successful here? And one of the things you had to do to be successful was you had to get the right grapes, and so I never forgot that. That was really important.

The corporation decided to invest and so I got the job of going around the country trying to entice people to invest in vineyards and a lot of people said "Yes, but who's going to farm it?" and so we tried to set up a farming company, and we could find people who would farm 30 acres the old way, but nobody would farm a hundred acres the new way, and we wanted to introduce technology.

Secondly, about right that time we were hit, or the corporation was hit by the boycott of their liquor products by Cesar Chavez and United Farm Workers. So I was asked to set up a farming company, and I did. That's how I came to Napa.

You were involved with settling that dispute with Cesar Chavez?

Yes I was. It was a very difficult thing to do, but ... I had a situation with Cesar that we trusted each other. He never lied to me. I never lied to him. It was a situation here where most people thought that the workers were union people, and I always thought that they were our people who are represented by a union. They chose that. They wanted us to force all the people who had sold us the winery, all the growers in the San Joaquin into the union, and we had a contract with the growers who said we couldn’t do that.

There was a meeting at my house where I said unbeknownst to Hueblein, or anybody else that I was going to show them the contract. The general counsel, Jerry Cohen showed up and surprise to me, Dolores Huerta showed up at my house, and I remember in those days she was really persona non grata, but we got it settled and we just took it in hand to settle it. It settled two weeks later when they finally found out that we simply could not do what I had been telling them they couldn't do.

You have a tremendous amount of acreage in Napa Valley right now. Tell us a little bit about how you built it up over time.

We were a farming company. We started out farming for other people, and in the early 1970s we were farming 10 to 12 percent of the Napa Valley, but as a farming company. We knew the land from all over the valley, and every time we got a couple nickels, we bought another piece of land and people would lend us the money. Then, as the values grew, we would borrow more money on that property.

How did you pick your spots? How did you find the parcels that you ended up putting together?

We've been farming around everything and plus I had André who had been here forever and knew Cabernet Sauvignon and we wanted to grow Cabernet Sauvignon. The whole deal with Hueblein was that ... We were trying to convince other people, other farmers to plant Cabernet. They said, "We just paid off the Bank of America, and you want me to stop growing something that I can get 8 tons per acre, to grow 3 tons per acre of Cabernet, and we get the same price, so we're not going to do that," but we knew where the property was through our work farming and through what André had been buying forever.

The thing about vineyards whether it's To Kalon or George III or whatever, the total equals more than the sum of the parts, so you have to see empirically what's it done over a period of time, and they are the vineyards that have been the best wines ... For example To-Kolan was planted in 1858, and in 1890 or whatever that was the best red grapes in the world, I mean, certainly in California, in Napa Valley. Well, it's always been the best grapes. The1940s grapes aren't as good the 2010 grapes, but it's always been the best.

I could tell you about the soils and the climate and everything, but it's the whole sum of that and that's true I think of all grape vineyards, the total is more than the sum of the parts, so you want to find vineyards that have been planted and had been successful over a large period of time. We have six what we call Heritage Vineyards, all planted in the 19th century. 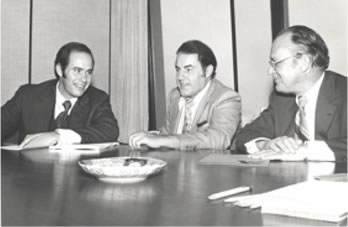 How many different wine makers do you work with right now?

That's a lot of relationships to manage.

It is. It is. What we did early on, we developed something that's called the "Bottle price formula". In agriculture, the grower wants to overproduce and the buyer wants to underpay, and so we developed a system that rather than being paid on crop size ... In agriculture, the big crops-low price, low crops-big price ... We developed a system where we get paid based on the value of the retail bottle-, percentage of the final price to the consumer.

What we are trying to do is that we're trying to make better wine, and I think that has made better wine for us, but it put the grower and the vintner on the same page. Anything we can do to make that wine better, we're willing to do. We cooperate with them greatly. We farm. We don’t tell them how to make wine. They don’t tell us how to farm, but we talk to each other all the time, but all that same basic interest that I'm doing what they want because of my interest, and they're doing what I want because of their interest, so we get along very well.

You also have vineyards in Mendocino and Lake County. I mean tell us about the differences there.

When we bought the company, they had vineyards in Mendocino that I was forced to buy, and we grow Chardonnay there because that ground is very heavy. It's not drained and so can't really grow Cabernet there, but it makes an excellent, excellent Chardonnay.

We went tp Lake County and here farm at 100 feet above sea level. There we start farming at 2000 feet above sea level. Totally different, but the red hills has the perfect soil and it looks like a really unique climate for growing Cabernet Sauvignon. We're super pleased with that. We've been there for almost 15 years now, and we're beginning to prove to the wineries and to the public that the quality of that fruit. I'm very, very excited about it. Cabernet Sauvignon from Lake County, is in my view, the most promising wine product in the new world of wine. That means the Australian wines and the New Zealand wines and everything else, Cabernet from Lake County is the most exciting thing.

Why you don’t make wine yourself?

The reason I don’t make wine myself is because I enjoy making grapes myself. I enjoy the land. I enjoy the people. I enjoy just being outside and doing. It's a totally different business. Just because you can grow potatoes, doesn't mean you can sell potato chips. I don’t do consumer marketing. I don’t travel.

I don't want to say it's not something bad with winemaking. It's something good about farming, and if I was in winemaking, I could never have accumulated the grapes that I have. You simply can't, starting with nothing and doing it yourself, you simply can't do that.

Understand the business in Napa, that over 50 percent of the grapes that are grown in Napa are grown by people who don’t make wine. Both businesses, grape growing and winemaking are so capital intensive, most people couldn't do both, so some of us decided to go one way, and some of us decided to go other way, but it's all about your attitude and the kind of life you want to live.

Interested in reading more about the grape growing pioneer? Be sure to check out Lettie Teague's Wall Street Journal profile.