Winking Owl: Reviews of an Under $3 Wine 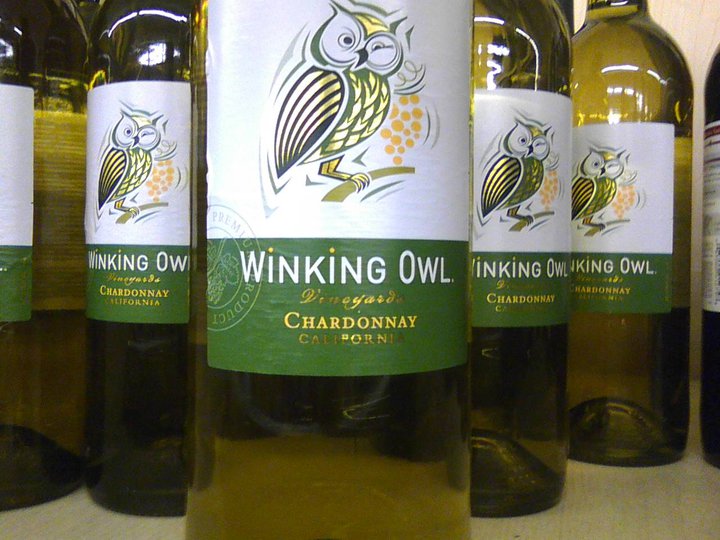 The first thing I thought when encountering a wine called "Winking Owl" had nothing to do with the fact that it sells for less than $3, is exclusive to the Aldi grocery store chain, and is made by Gallo. No, my first thought was, "Can an owl wink?"* Fortunately, many have chimed in on how the wines taste. Here are a few thoughts:

Robert Scheer, The Indianpolis Star: A fan of the Shiraz because it ...tastes like it should, with good fruit flavors that remind me of blackberry, and some smokiness that's reminiscent of South African pinotage. I'd buy it again. You can do a lot worse for $10, more than triple the cost of this."

Dave Van de Walle, Metasip: More praise for the Shiraz: "Quite tasty, some fruit, but pretty dry. Good finish – blackberry, black pepper. (Label pictured below says 'a hint of spice.' We agree.) Earthy as well." He goes on to give it a "B+". In case you are in shock, he reiterates, "Yes, you heard me. This wine cost us $3 and gets a B+."

Dave, Cheap Wine Finder: Regarding the Cabernet Sauvignon: "What it is, is a very drinkable, very inexpensive bottle of Red wine. It is slightly on the sweet side and the tannins are missing, so there is not a ton of structure, but it has a nice mix of flavors and no 'off' flavor or odd textures."

Dennis Maley, The Bradenton Times: In a head-to-head cage match with the offerings of Charles Shaw, Maley concluded, "Both were certainly drinkable and still far better than anything else at the price point, but neither came close to Lindeman's Shiraz Bin 50, an Australian wine that retails for $5 at Publix and for me has always been the standard in cheap Shiraz. Unless you really need that extra $2, I wouldn't say either are worth the savings, though I'd give a slight edge to Winking Owl here."

*I found the answer to my question.