According to a report by the Washington Post (which, in turn, referenced a report by Naked Wines), "[a]ll but three states — Nebraska, Kansas, and Iowa — buy more red than white." Wait a minute. Three red-blooded, meat-eatin' states in the Midwest are the only ones to prefer white to red? C'mon Kansas! Get it together!

Anyway, this is rather timely as the reports are released as conversations surrounding the health benefits of wine, specifically red, are becoming increasingly relevant and divided.

Below: The state breakdown. Full a fully-interactive map, go to the original article on WaPo. (Washington Post) 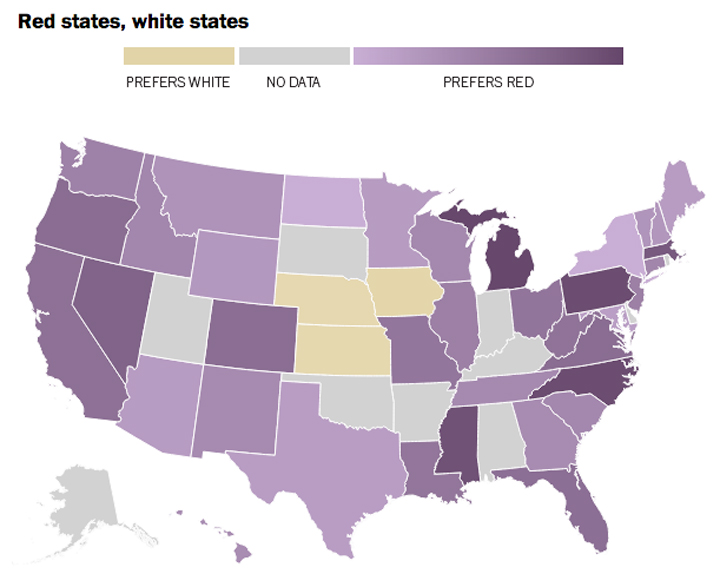 WaPo spoke with Naked Wines, who were the company behind the study:

"Purchases can be a bit seasonal, and in the summer we see an uptick in white wine sales, but there's still a very clear overall preference for red," said Benoit Vialle, the COO of Naked Wines.

Naked Wines' data dive isn't the first to find that Americans like red wine best. A survey conducted this past spring by online wine retailer Corkguru found that 58 percent of Americans prefer red wine, and that that preference spans all ages and socioeconomic backgrounds. A separate study by California Polytechnic State University in 2013 found that over 60 percent of respondents preferred red wine to white. And a 2008 paper by the American Association of Wine Economics concluded that "red [wine] appears more appreciated with respect to white."

The article goes on to claim that according to International Wine and Spirit Research (IWSR), red wine "still accounts for more roughly 55 percent of all still, light wine consumption" and that the IWSS predictats that "red wine consumption will increase by nearly 10 percent between 2011 and 2016, while white wine consumption grows by a much tamer 2.8 percent over that same period."

Now that you know most people's preferences, why not send your colleagues a bottle?