The first thing I notice when Giampiero Bea and I pull up to the Paolo Bea winery on a blustery mid-morning in late October is an older man moving some dirt around with an rusty, beat-up shovel. “That is Paolo Bea,” says Giampiero, with a reverential half-smile as he points to his father.

Paolo radiates bonhomie as he greets me with a huge grin and a few words in Italian. He’s got the rugged handsomeness and the dry, rough hands of someone who has spent his life doing just about anything to avoid sitting indoors behind a desk. What he doesn’t look like is a nonconforming activist, and card-carrying member of one of the more controversial fringe factions in the wine world — the Natural Wine Movement. 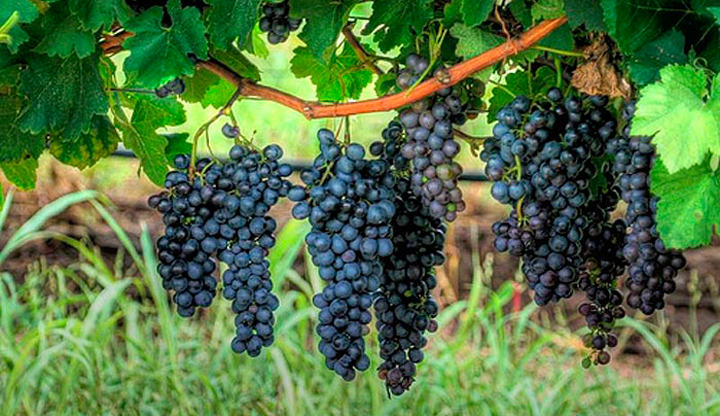 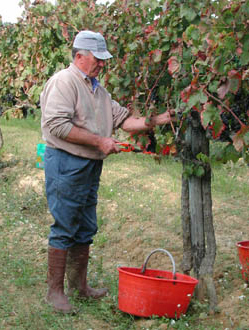 I had traveled to Umbria to research Sagrantino di Montefalco, the dark, powerful, famously hard-to-tame grape that is increasingly responsible for some of the finest red wines in Central Italy. The Bea family has farmed this land since the 1500s, but Paolo didn’t start making his wines until 1980.

His Sagrantinos are some of the most exquisite on the planet, but that doesn’t fully explain his rock star status. Bea is one of Italy’s most passionately devoted natural winemakers, and a founding member of Vini Veri, a tradition-minded group devoted to non-interventionist winemaking.

Natural wine has no official definition, but it is safe to say organic doesn’t begin to cover it. Organic wines are made from grapes grown without chemicals or pesticides, yet they can be manipulated like hell once in the winery, think: added sugars, nitrogen, acids, tannins, oak essence, water, heavy preservatives. The natural winemaker takes a hands-off approach in the cellar, adding nothing and removing nothing. Only the natural yeasts present on grape skins are used to kick-start fermentation. Natural wines aren’t filtered or fined of their sediment (chewy is not an exaggerated descriptor), and contain little or no sulfur dioxide as a preservative. Grapes are picked, dumped in tanks or casks, and pretty much left to their own devices. What these winemakers religiously seek is a wine that tastes like the place it’s from.

Though it sounds innocuous enough, natural wine makes a lot of people really angry. As the indie rock bands of the wine world, they have a cult following, but for every admiring wine geek or sommelier, there are at least a dozen haters, some more influential than others. Take the critic Robert Parker, who describes natural wine as “one of the major scams being foisted on wine consumers.” Some decry the lack of uniform regulation, others resent the group’s implication that all other wines are somehow “unnatural.” Lobbing additional grenades into the battlefield are natural winemakers themselves, an outspoken handful of whom can be a touch sanctimonious, prone to self-righteous, wild-eyed rants portraying conventional winemaking as one of the world’s great evils.

Yet, during my day with Giampiero — who makes the wines at Paolo Bea today, and is even more of a natural wine activist than his father — I find him soft-spoken and sweet, earnest, and respectful. For Bea, “natural wine” seems less about a crusade than creating a truly expressive, delicious bottle of wine. 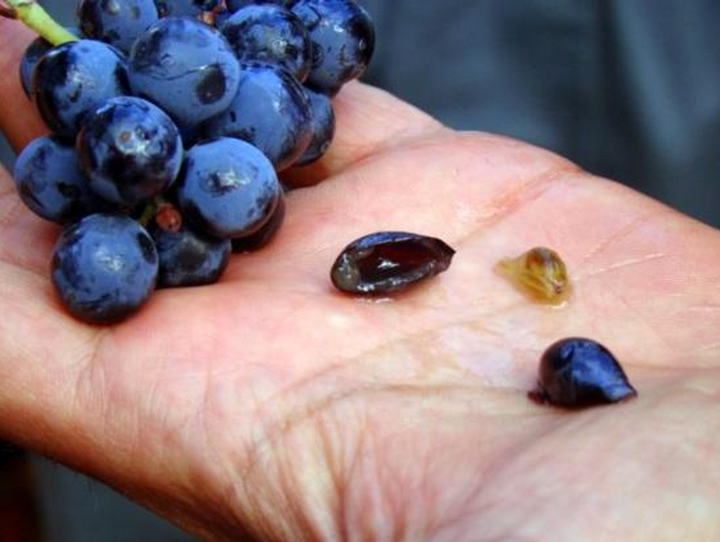 “I want to taste the identity of the land,” he tells me, with the air of a poet. “In every wine, you have 80% water and 12 to 15% alcohol. That last 5 to 8% is the identity of the place and it comes from the seeds, the skins and the juice of the grapes.” This is why Bea won’t discard seeds or soften tannins, like many of his neighbors, and why he leaves his wines to macerate with the character-imparting skins for months longer than conventional winemakers. He believes filtering a wine before bottling “sucks the life out of it.” 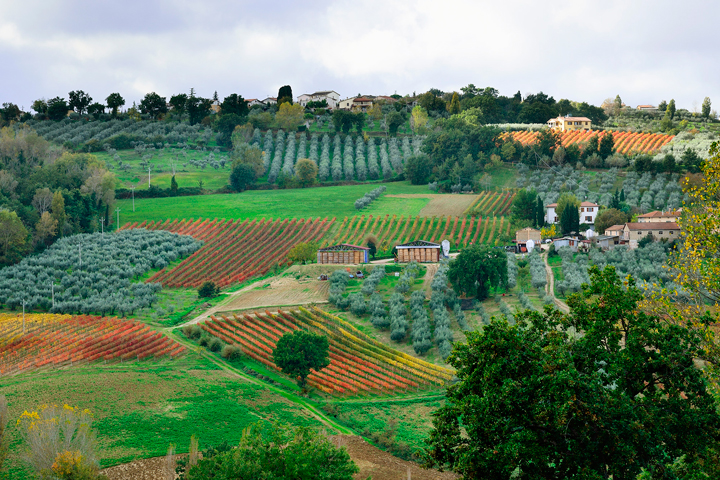 Above: A handful of Sagrantino, and the beautiful expanse of Montefalco. (Trip Advisor)

Critical to the land’s flavor is biodiversity, Bea is convinced, which is why at Paolo Bea’s estate, just outside the walled medieval village of Montefalco, you won’t find the endless sea of vines typical of most wine regions. Bea’s vines remain interspersed with forests, olive trees, vegetables and wild herbs, the way it’s been for hundreds of years in this part of Italy. Some of them vines are extremely old, like his 140 year old Trebbiano Spoletino vines which are the size of full-grown trees, trellised to appear as if they are all joining hands. Bea knows intimately every inch of every row, as natural viticulture demands constant vigilance (his natural pesticide is the bug-eating red) and he only harvests when the moon is waning, since he believes this reduces the risk of rot. 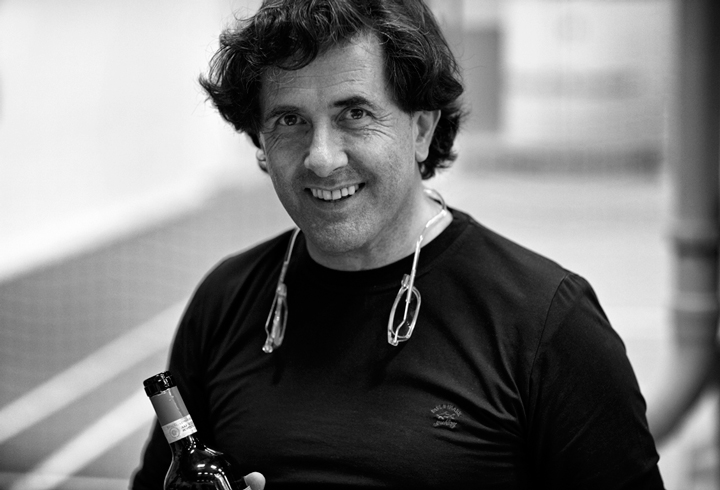 Bea’s minimalist winery, designed eight years ago by Giampiero, an architect by training, is made of stone, wood, and earth, seamlessly integrated into its surroundings. Many wineries seek to keep out the environment — oxygen exposure and temperature fluctuations are viewed as the enemy — but Bea invites it right on in.

“I want my wines exposed to the four elements of their environment: wind, water, light and heat,” he tells me. The only temperature control he employs is cool, stone walls and lots of holes, gaps, and tubes throughout winery which provide circulation. The winery’s subterranean level is partially open to the excavated earth which leaches groundwater to add humidity.

Natural wines get criticized for tremendous bottle variation — you never know what you’re getting — due in large part to the absence of sulphur dioxide, and Bea’s wines are no exception (though he does use an infinitesimal amount of SO2 at bottling). I have been drinking Paolo Bea’s wines whenever I can find them ever since a friend turned me onto them five years ago, and though I’ve never had a bad one (some natural wines can be down-right undrinkable with funky bacteria and fizz) each one tastes quite different, even within the same vintage.

This, he explains, is what wine should be — alive. And tasting through the twelve wines he’s opened up, it’s hard not to agree. Sure, Bea’s wines aren’t for everyone, but they are some of the most intriguing wines I’ve experienced. Take his Arboreus white, made with 100% Trebbiano Spoletino. With a dark golden-orange color — thanks to all that extra skin-contact — flavors of honey, minerals and earth and a thick, almost gritty texture, it is a spectacular wine with really no reference point.

His reds are slightly more straightforward. Some argue natural wines are an acquired taste, but I can’t imagine any palate that would have to learn to enjoy Bea’s Sagrantino, a brooding, concentrated, spicy, structured red from the Pagliaro vineyard. For his Montefalco Rosso, Bea picks and ferments his Sangiovese, Montepulciano and Sagrantino grapes together, rather than picking them separately when each achieves ideal ripeness like most winemakers. The resulting wine has the vibrancy and brightness of fresh fruit and acid, yet a depth of flavor and a density — classic Bea style. His rejection of new French oak in favor of large neutral Slovenian casks for all his wines means than the fruit and terroir are unmasked.

All this alive-ness and purity come at a price, of course. “Every year Bea walks on the blade of a knife,” one of his winemaking neighbors said to me. No one knows this better than Giampiero himself. The 2014 harvest was very wet, and Bea, who refuses to spray copper — which is permitted under organic viticulture to halt mold — watched his entire crop of Sagrantino rot on the vine. For the second year in a row. He was the only producer in the region I visited who had suffered this calamity, and his heartbreak was palpable. “My father understood early on the impact of chemicals, even as a dairy farmer, and we will always choose less quantity in favor of quality,” Bea says.

Clearly, his is not the best business model. But Bea is not running a business as much as pursuing an art form. After a few glasses of wine, the modest Giampiero lets loose some of his stronger opinions: “Most wines are a construction. They may be good, but they are a man-made construction. And they are dead.” The phrase, “wine having soul” gets bantered around liberally in the wine world, but Bea walks the walk.

Wines produced by more conventional methods will always remain the mainstay of what most of us drink on a daily basis. Even if you wanted to drink natural wines all the time — some believe they don’t give you hangovers! — there just aren’t that many to go around. Yet even those who scoff at the metaphysical wine speak must admit there is something provocative and fascinating about wines like Paolo Bea’s: Making wines this way reduces the amount of control the winemaker has over the finished product, and you can taste that feral energy in the glass. 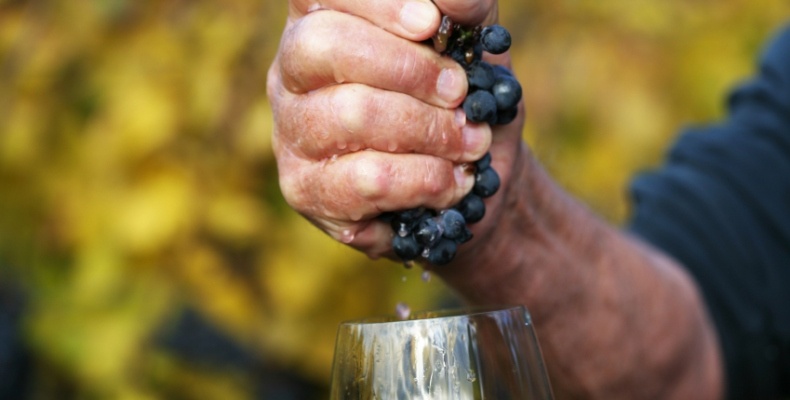 Above: A fruit fountain. (Excelsior)