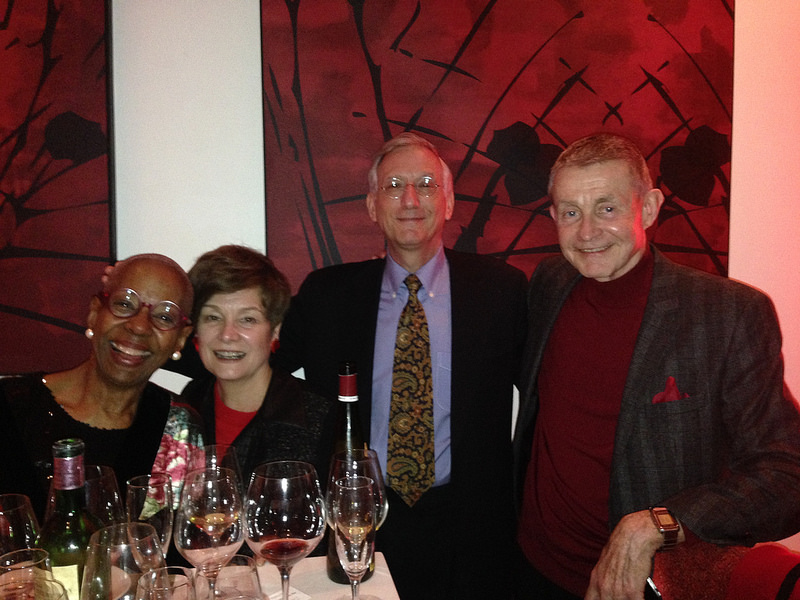 You may have heard about many people's experience talking part in Open That Bottle Night 2014, which was just this past Saturday, February 22nd. But I thought we should hear from Grape Collective Senior Editor Dorothy J. Gaiter. After all, she founded Open That Bottle Night (OTBN) with her husband, Jon Brecher, fifteen years ago. The couple was part of France Magazine’s OTBN celebration at iCi Urban Bistro in Washington D.C.'s Sofitel Lafayette Square. Below Dorothy shares snapshots of some of the most memorable bottles and stories from that night:

One group brought a 1998 Alsace Riesling that proved, once again, how beautifully these wines can age. The postscript: When John mentioned the wine to Christian Schiller, a former economist with the International Monetary Fund and now a wine blogger, Christian asked to see the bottle. He took one look and broke into a wide smile. He and his wife Annette had gone to that vineyard for a wedding a number of years ago and, as the guests were waiting, they were told that the wedding was off. So they stayed on the grounds of the winery and Annette took a midnight stroll through it with their German Shepherd, who goes everywhere with them. The wine was lovely, fragrant, rich and round. Wine -- what a wonderful world, both so large and so small at the same time.

A couple of tables were taken up by members of the D.C. chapter of the Commanderie de Bordeaux including Madame Le Maitre, Bette A. Alberts, the first female head of a chapter in the U.S. Leonard L. Silverstein, president of the French-American Cultural Foundation, was at that table, too. The not-for-profit foundation publishes France Magazine, for which I’ve been Food and Wine Editor since 2011. It sponsored the OTBN event with the Sofitel, Lafayette Square. Among the wines at their table was a still-lovely with black fruit 1989 Château Villars from Fronsac.

Among the other old Bordeaux opened: Château Duhart-Milon from Pauillac and 1985 Château Cos d'Estournel and 1995 Château Lafon-Rochet, both from Saint-Estèphe. The latter was brought by Carol and Bill Englehaupt and they’d had it for six years, waiting for the perfect opportunity to open it.

Elizabeth Clauhsen, managing director of Savoy Partners, a consulting company, and her guest enjoyed a Champagne from Diebolt-Vallois from the village of Cramant that they said had been special-ordered from the Four Seasons George V in Paris. They even had a note from Eric Beaumard, the director andn famous sommelier at the George V’s restaurant, Le Cinq. That’s truly going the extra mile for a wine.

Several wines were opened by people who had visited the winery. Josef Leitmann, a program manager at the World Bank, and his wife, Reiko, got married at St. Supéry Estate Vineyards & Winery in Napa in 1992 and brought a 1990 St. Supéry Cabernet Sauvignon that was decanted and developed beautifully over the night. There was also a 2000 Domaine Bosquet des Papes Châteauneuf du Pape that had been acquired after dinner with the winemaker.

Alan N. Schlaifer, an attorney, opened a 1967 Château Lafite Rothschild from his wedding, saying that he hoped that it would fare better than his now-ended marriage. It was amazing, with dusty old ripe fruit.

Our grower's Champagne, Didier-Ducos et Fils Absolu Meunier, helped us salute two very special friends, Bill Plante of CBS News and Karen Taylor, the editor of France Magazine. We met Karen first as a reader of our Tastings Column in The Wall Street Journal. In 2009, we’d written that we were preparing to take our daughter Media to Paris and to leave her there to study for six months. Taylor wrote to us offering help and advice if we needed it. After we left The Journal, we kept up our correspondence, and eventually she asked us to write about food and wine for her (John later moved to another job). For our first issue in France Magazine, we wrote about a tiny company in Seattle called Fat Cork that imported grower Champagnes. Our OTBN bottle was part of a case John gave me from Fat Cork last year. And on the opposite page was our interview with Bill. Bill has been the go-to person for all things vinous in the White House press corps since Reagan occupied the Oval Office. He and his wife, Robin Smith, a documentary filmmaker, brought a half bottle of ’83 Mouton Rothschild, still excellent, and a bottle of ’70 La Mission Haut Brion, which he thought was 'a bit tired', but which I thought was still hanging in there. John and I also tend to keep wines too long, hence Open That Bottle Night.

Our wine? We had never had a 100% Pinot Meunier Champagne and it was a treat, austere, intellectual, very much like a component part when very cold. Warmer, the austerity was balanced by fruitier tastes. It wasn’t a wine that we’d had for a long time, but it was a wine of considerable significance for us. That old Monthelie that we look at every year may get opened next year."

(Pictured at the top: From OTBN at the Sofitel: Dorothy, Robin Smith, John, and Bill Plante.)