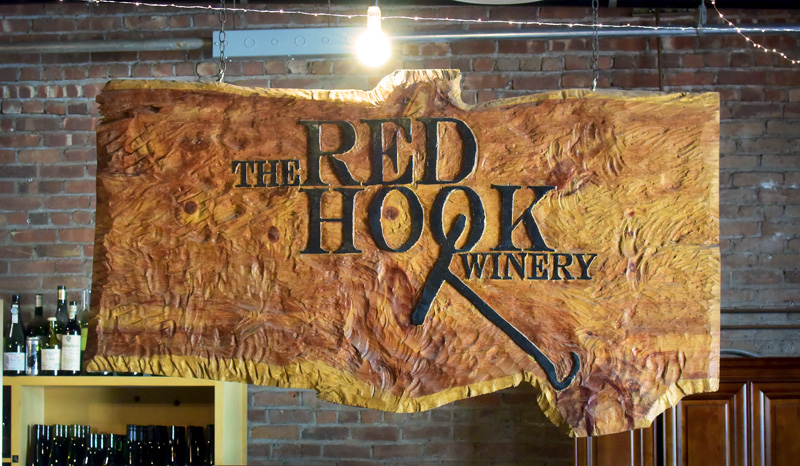 The threat of Hurricane Sandy had led President Obama to declare a state of emergency for New York state the night before. Schools, subways, the New York Stock Exchange and airports were all shut down in New York City. New York City Mayor Michael Bloomberg declared Sandy the “storm of the century.”

Some of New York's neighborhoods were hit harder than others. One of those was the Red Hook area of Brooklyn, the location of Red Hook Winery, which, at that point, had been open just long enough to set all of their equipment up.

As far as structural damage to the building, Red Hook Winery fared pretty well. The bricks were originally laid for a warehouse, and it was on a pier so there wasn’t a basement that could flood. The storm surge, however, proved to be disasterous.

In front of the roll down gate at the entrance to the winery sat planters, a picnic table and other decorations. Water forced everything in front of the building onto the gate, eventually popping it off of the tracks and letting in a four foot wall of water that made it’s way from one side of the winery to the other.

The water came and left relatively quickly, but things that were once at the front of the winery were sent crashing toward the back, and stacks of barrels were toppled like a game of Jenga. It was the last night of harvest when the storm hit, so the barrels were filled with fermenting grapes. Hundreds of pounds of barrels and plastic containers floated up on the water and then flipped over, spilling their contents onto the floor after the water receded. In all, somewhere around 20 tons of grapes were on the floor when workers returned to Red Hook Winery, says Colin Alevras, who helps make wine at Red Hook Winery and was there the day after Sandy.

“The first part was just coming in and assessing damage,” Alevras said. “Figure out what was immediately salvageable and what was dangerous. It took a good week to stare at things and be like ‘oh, ok.’”

Anything needing electricity was shot. The forklift was essentially an oversized paperweight and the pumps were destroyed. Borrowing equipment would be useless, since the winery didn’t have power to use the equipment anyway. Without power, Red Hook Winery wasn’t able to control the temperature for the few wines that did survive while unseasonably high temperatures following Sandy added to the less than ideal wine making environment.

“It took us until last year to recover, get everything bottled, get everything set up and now all that stuff is finished,” Alevras said. “I think there’s just two pieces of equipment still being repaired.”

Surging water hurt the business, but a surge in awareness of the winery and the area also brought new people in that would never have known about Red Hook Winery if it weren’t for the damage from Sandy.

Today the barrels are stacked, the furniture is put back in place and quality wines are continuing to be made. As much as Red Hook Winery tries not to dwell on it, the effects of Sandy three years ago are a piece of history that helps define what the winery was, is and will be.