The High Priest of Riesling and a Scuzzy Little Theater

The list of people to whom I owe a debt of gratitude grows every year.  Perhaps life experiences refract that way, the lengthening view affording opportunities to recognize and acknowledge those who have imparted some lasting gift, large and small, precious all.

It’s wonderful when you get a chance to say thank you in person. A few days ago, I got a chance thank Terry Theise (below left with Jakob Schneider from Weingut Schneider), who has done more than any individual to popularize Riesling in the U.S., by importing them when they were little known or appreciated here. I told him that when we saw his name on the back label of a bottle, we felt that we were in for a special experience, a wine of distinction.

“When you say to me that my name on the back label of a bottle of a wine was a reasonable guarantee of quality, I am so gratified I don't know hardly what to say,” he responded. 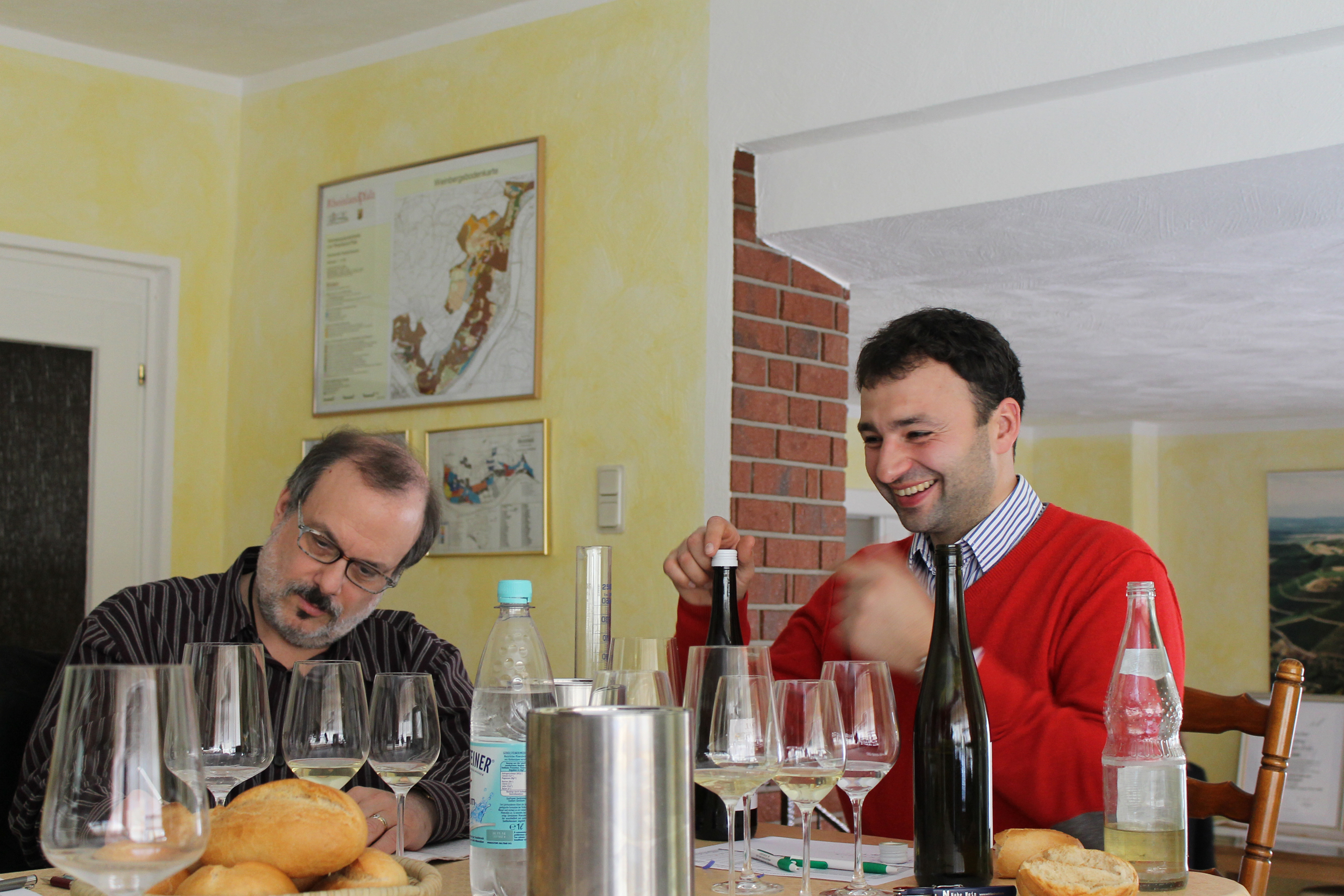 When I reminded him that someone had dubbed him the Patron Saint of Lost Causes for his embrace of German and Austrian wines, Rieslings first among them, and grower’s Champagne, he laughed and said, “That is for sure true. Widows and orphans, come to me, baby.” Theise rhymes with peace.

John and I started out with fine wine in the early 1970s, poring over books, joining wine clubs that staged tastings with winemakers, traveling to wine regions and enlisting the aid of wise wine merchants. One of those merchants, Art, at the Wine Cask in West Palm Beach, thrust a German wine into John’s hand one day and asked him if he liked German wines. Then he said something like, “Forget what you think you know about German wines. You have to try this.” And, yes, what we knew about German wines back then could be summed up in one word: sweet. OK, maybe two other words, “Blue Nun,” a simple, sweet wine that used to sport the designation “Liebfraumilch” but no longer does. It became so infamous that a few years ago, Eric Pfanner wrote in The New York Times from Nierstein, Germany:

“A century ago, the vineyards that rise precipitously from the banks of the Rhine here produced some of the most prized wines in the world. The Roter Hang, or red slope, was the pride of Rheinhessen, the largest wine region in Germany.

“Then came a trio of disasters: World War I, World War II and Liebfraumilch.”

Ouch! While it had some Riesling in it, Liebfraumilch wasn’t a Riesling back then. Today it’s a brand name that’s used for Riesling in a bottle or box; the “Authentic White” made from the Rivaner (Müller-Thurgau) grape, in the traditional blue bottle; and a wine that’s called “Sweet Red.” Yep, that’s what it’s called. Blue Nun was, nevertheless, an incredible success in its day and its motto, “Right Through the Meal,” helped make the point that you didn’t need to change wines with the meal’s courses.

Anyway, I digress, but only a little. That motto did underscore the reality that Riesling, Germany’s most famous white, is especially harmonious with a wide range of foods. Theise’s wife, Odessa Piper, is a well-known chef and former restaurateur. They live in Boston.

The wine that Art sold John in 1976 was a Steinberger Riesling from the Rheingau region, and it not only changed our minds forever about German wines, but we can still taste it. It wasn’t sweet but rather was packed with intense fruit. It was ethereal as a cloud and at the same time it vibrated with tension and lively acidity. Ask almost any true wine lover and they’ll wax poetic about their first mind-blowing Riesling. Mary Ewing-Mulligan, for instance, the first American woman to earn the Master of Wine accreditation, told us years ago that she had a Riesling that was so pure that it brought her to tears.

So how was it, I asked Theise, that he came to discover Riesling, the nectar of the gods? I’d read that while he was in middle school he’d lived for a few years in Munich so I asked about his “Munich Years.”  Turns out that his dad was an executive in Munich with the Voice of America, the “official external broadcast institution of the United States federal government.”

He became friends with some boys from other countries and they formed a band, the Plastic Surgery. Except Gino, the Italian drummer, misunderstood and had The Plastic Association emblazoned on his drums, so that was the name by which they were known for the band’s total existence.

Fast forward to the late 1970s, when on a hiatus from college that proved permanent, Theise returned to Munich and rediscovered some of his old friends. “We drank wine casually and it was mostly supermarket plonk that we were drinking. One day by accident I brought a bottle home of something called Riesling. It was a co-op bottling, Kabinett from the Mosel, 1971 vintage. I just had never tasted anything like it. It was so radically different from the fruity, simple stuff that I'd been drinking that I thought, OK.

“First it was uncanny, second it was compelling, and third I felt immediately I can’t let the rediscovery of wines like this be random or accidental. I need at least to acquire a minimum amount of information so I can find my way back to wines like this because this is what I want to keep drinking. At that point, I just embarked upon trying to learn the basics.”

And so he did, reading and tasting and visiting wineries. Thankfully, he decided to import some of these, which is how we discovered what is known as the Terry Theise Estate Selection, which is now imported by Michael Skurnik Wines. Theise also has written a book, “Reading Between the Vines,” and more recently made a movie, “Leading Between the Vines,” which profiles several winemaking families. He confided –- you must read the transcript -— that he’s several chapters into another book. Skurnik’s website is also where you’ll find Theise’s famous catalogs, which the site says are “For those of you harboring an unquenchable thirst for wine knowledge, an unbridled zest for life, and an all around love of laughter.” 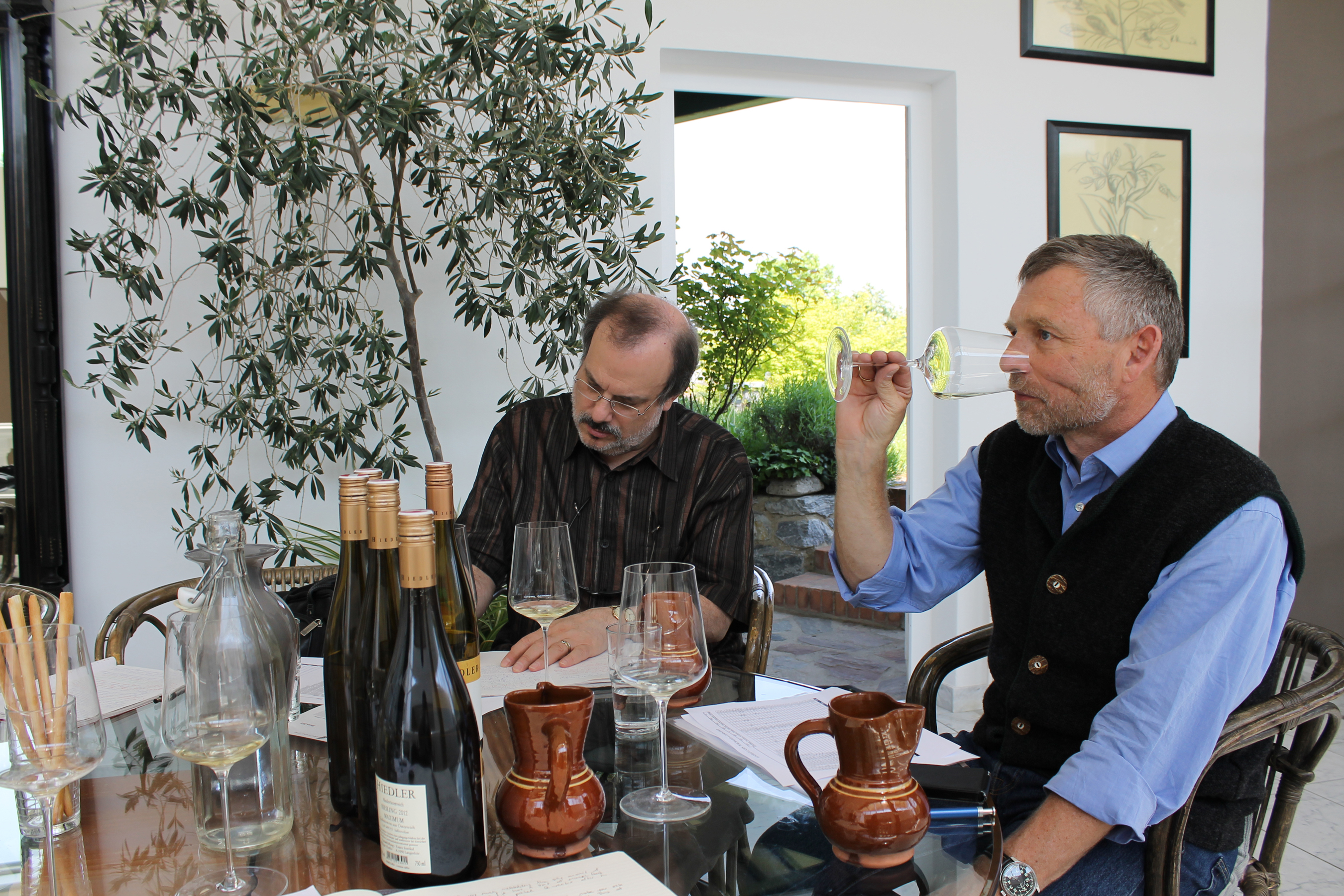 Beauty is more important than impact.

Harmony is more important than intensity.

The whole of any wine must always be more than the sum of its parts.

Soul is more important than anything, and soul is expressed as a trinity of family, soil, and artisanality.

Wasn’t putting his name on the back label a big deal? I asked him. It meant a lot to others like me.

“Partly it was kind of a marketing shortcut. In the early days, I was working with producers whom nobody had ever heard of. I decided also that I would establish my name as kind of the thin end of the wedge for people to get into these til then unknown producers. But the most important reason was I put my name on the label as a means of self-control should I be tempted to compromise,” he said.

“The temptations of compromising are always present. You're sitting with a producer and tasting his wine and you want to make him happy. If there's a wine that he happens to believe in and I happen not to like all that much, I may be motivated by sentimentality to offer that wine because I want to make him happy.

“If my name is on the label too, then I am much more severe about what I accept and what I reject,” he said.

I asked Theise why Riesling is still such a hard sell for so many people.

“You get different answers to that question depending upon whom you ask. I think if you ask Stuart Pigott, he'd say it is catching on. Paul Grieco might say the same,” Theise told me. “We certainly sell a great deal more Riesling than we ever have sold, but it's still not a mainstream mass-market kind of thing, which by the way I am personally relieved about.”
What?

What would the wrong reasons be? I asked.

“Trendiness. It's certainly possible to make bland, uninteresting Riesling. You have to work at it, but it can be done. People will sometimes say as long as somebody is reading a book it doesn't matter if they're reading trash, they're engaged in the act of reading. To my way of thinking that's like saying well as long as somebody's in a Burger King eventually they might graduate to Brooklyn Fair or Eleven Madison. I just don’t necessarily see that as true.

He continued:  “Riesling is never going to be the Romcom or car chase explosion computer generated imagery special effects popcorn chompers that you see at your local multiplex. Riesling is always going to be the really quirky little Indie film that's playing at the scuzzy little theater around the corner and instead of a gigantic queue at the door, there's going to a little scrum of about 2 or 3 nerds waiting in line for tickets.

“That's Riesling, but it's a very high quality of experience,” Theise said. “In fact, I think ... Ultimately I think Riesling is the master class of wine appreciation and wine loving. It delivers to the drinker more of everything that can matter about wine.”

Seriously, who can argue with that?