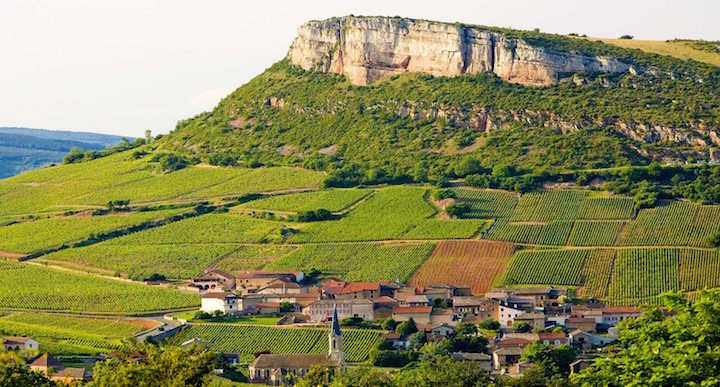 The Mâconnais, named after the town of Mâcon, is one of five wine regions in Burgundy, France, and is situated west of the Saône River between Côte Chalonnaise and Beaujolais. It is known for its good value white wine made from Chardonnay grapes, and its production is second in volume only to Chablis. Approximately 80% of grapes in the region are Chardonnay, but Pinot Noir and Gamay are also cultivated for the production of delicate red and rosé wines. 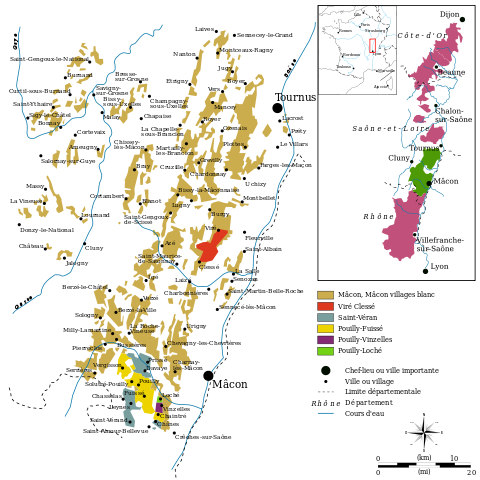 Mâcon AOC itself produces white, rosé, and red wines, including varietally labeled Gamay, and the appellation is available to producers throughout the entire Mâconnais region. 85% of the Mâcon AOC production, however, carries the geographic designation Mâcon-Villages or, more precisely, the name of a single commune appended to the appellation, such as Lugny, Milly-Lamartine, or Pierreclos. Many of the single communes may produce all three colors of wine, depending on the individual site, but only white wines may be labeled as Mâcon-Villages.

Producing the finest white wines among the Mâconnais, Pouilly-Fuissé AOC includes four communes: Fuissé, Solutré-Pouilly, Vergisson, and Chaintré. The appellation's vineyards rise up the slopes below the Rocks of Solutré and Vergisson, two large limestone escarpments that define the landscape of the southern Mâconnais.

Saint-Véran AOC, split by Pouilly-Fuissé into two small islands, extends over eight communes. It is the largest appellation among Mâconnais. Viré-Clessé, the youngest appellation in the region, combines the wines of two communes under one AOC banner, and dates back only to 1999.

The landscape in Mâconnais is marked by rolling limestone hills, and is bordered to the east by the Saône River as it flows south to meet the Rhône just outside Lyon.

These hillsides are home to the prestigious villages of Pouilly, Vinzelles and Loch, and offer the best of the Mâconnais terroir. The alkaline, iron-rich clay soil often found in Mâconnais contains powerful minerals that keep the wine fresh and crisp, and the clay itself brings out great flavor in the Chardonnay.

The Mâconnais climate shows signs of its proximity to the Rhône Valley, experiencing more of a Mediterranean influence. It is warmer than most other Burgundy regions with the exception of Beaujolais. With these weather conditions, Chardonnay ripens more successfully here than in Cote d’Or, and the wines from Mâconnais are markedly riper and richer than those from Chablis.

Most Mâcon Chardonnay is fermented and raised in stainless steel and bottled early for freshness. General flavor profile ranges from yellow apple and citrus fruits to tropical fruit notes like honeydew melon, pineapple, and kiwi. The more expensive examples of Mâconnais Chardonnay will likely show some new oak in the form of sweet baking spices and hazelnuts on the nose. In comparison to Chablis, it tends to be fruitier and more open, but without Chablis’ sharp mineral edge and high acidity. Mâcon Blancs are best to consume young.