A few days shy of his 61st birthday, Randall Grahm intimates that at last, it’s time to become an adult.  “Things have been so tough ...” he says, pausing a couple of difficult moments attempting  to compose himself. He is crying. Tears fill his red eyes behind black, round, Harold Lloyd glasses. “… I’ve been out in the cold for a long time. “

Grahm, considered to be the smartest wine guy in the room – and perhaps the wittiest – now desperately wants his wines to be respected. To achieve that, he needs for everyone to look past the years of positioning himself as the iconoclastic intellectual, whose Steadman labels assaulted the senses, and the Cabernet-bashing that made him an enfant terrible, due to his characterization of them as “cartoons”.

During a discussion in his tiny, dark office in the Bonny Doon Vineyards’ production facility that shares a parking lot with of a new-agey grocery at the northern edge of Santa Cruz, Grahm ruminated about his desires for wine nirvana, his long struggle with debt, and how he might – or might not – transcend all, or some, of same.

“I think I’ve had my 15 minutes of fame,” is how he begins, all the while hoping against hope that his time has not come and gone. “I don’t want to hang it up. … I’m persistent. The most interesting (things) I’m still yet to do.  I’m a slow learner(but) now I’m more prepared to move on;  or at least have stronger attention deficit.”

With bravado, he responds to a recent reference to one of his considerable writings, in which he intimated that he wishes now to be taken seriously. “I don’t care if people take me seriously; they just need to buy my wine.”

Upon tasting various of his many wines, some with a lunch of acidity-based dishes at a nearby Chinese restaurant, it becomes evident that he is making wines – with the not-so-insignificant help of Nicole Walsh – that are close to his ideal, i.e. balanced, savory, and delicious.

When I ask him about the luftmensch reference that he’s used to characterize himself meaning, one who has his head in the clouds, he answers without hesitation, “I am a luftmensch, but I’m trying to be less of a luftmensch.  To do what I now want to do, I must be a luftmensch.”

“What I’m hoping to do in the next phase is something that no one has really done … and the way I way want to do it is such a crazy way of doing it; and it’s a really good idea or a really bad idea or somewhere in between.”

That’s the Randall Grahm in microcosm we’ve all come to love: the one who dares to dream those considerable dreams; the one who writes prodigiously and consciously to provoke us or go over our heads; and the one who lends wine its mystique.

It’s inevitable then that he talks about wanting to produce a wine of place, audaciously made from self-propogated seeds on dry-farmed land in some obscure California locale, with visions of animals sharing the vineyard. He already has such a land of oz (and another being offered by an investor that might come to fruition), but he hasn’t had the resources – read: money – to  do much about it.

Maybe this time, things can be different. Or maybe not. After all, he admits, the money for selling off his cash cow – Big House – eight years ago, “was slightly squandered.”

He weaves an odyssey about money coming from one bank, only to be pulled at the last minute (“We love you, but …”), and of another which he says, actually came through, but only after putting him through the labyrinthe. He also reveals but not for the record, that he’s cut a deal with a national food chain that will place his wines in its stores.

But then Grahm quiety discloses this: “There have been so many distractions (such as having to go on the road to sell).  I tend to focus on the immediate problems, like money; and how do I get some? Now that I’ve got a buck or two, what are we going to do with it?

“I’ve been out in the cold for a long time.  I told my shrink, now that things are getting a little better, I’m feeling anxiety. She told me, ‘You were so scared …  You’ve got to let these things in.’”

Why this time? Is it because you’re thinking about your mortality and that Amélie is now 11 (the latter is his daughter)?

“Probably I’m facing mortality,” he admits.  “I think you recapitulate parts of your life. The end of your life or career strangely reflects the beginning of your career.  It’s a mirror image.  It feels like I’m starting over.

“… I don’t know what’s happened to me. I just know for a while the wines were not as interesting. Now, what I’m feeling is that similar sense of excitement and discovery that I felt 25-30 years ago.”

Is it that, I inquire, he believes he’s running out of time?

“I will die at some point; probably before too soon; before I’ve finished everything,” he concedes. “But I’ll go as long as I can. Every year that we miss putting something in the ground it’s an Ingmar Bergman movie. It feels like the church bells chiming. I’m all too aware of the finite frame that I’m trying to work in. So I want to get a score on the board pretty soon.”

Does that scare you?

“It does,” Grahm answers flatly, “ but this is what being a mortal human being is. All of us have a finite number of years to accomplish what it is we want to accomplish. Many of us have regrets that we weren’t able to do what we wanted to do sooner.  I was able to figure it out before the very end; and I’m giving it a good shot.

“… I’ve had such a crazy, eclectic exposure to wine. I’ve worked with such wacky, unusual grape varieties – and it’s now time to harvest all of these learnings and impressions and try to apply them in a very special and thoughtful way.”

Aside from his pyschiatrist, is there a mentor to whom he turns?

“I have smart friends, who understand business more than I do. But everyone understands business more than I do. (But) I don’t really have a mentor,” he responds. “There’s no one I can ask or if I did ask for advice, they would say, ‘don’t do what you’re thinking about doing.’ Everyone who gives me advice tells me to play it safe, be more conservative. In fact, I do listen to them a little bit. We’re making Cabernet, for god’s sakes; go figure, Cabernet!

“This has been my dilemma. I’ve been so much of a purist and I literally can’t afford to be such a purist. I can’t afford to only make the wines that I love. … How many artists are so privileged to only devote themselves exclusively to things they love doing?”

It’s evident to conclude, that Randall Grahm is a dichotomy, always of two minds and wanting to having it all ways.

“Yeah, for sure,” he says forthrightly. “We all have issues of self-loathing … I don’t like the fact that I’m seemingly  so starved for attention that I clearly crave the world’s approval, clearly.  … I clearly want the world to love me, but not quite enough to go out and learn how to be a better salesperson.”

Aside from the fact that he says of himself, “I’m not a particularly a good capitalist, I’m a terrible capitalist,” why haven’t his wines – especially his superb Rhône-style Le Cigare Volant reds and whites – made a splash recently in critic’s assessments?

So, he ends with this:

“I’ve been kvetching the last couple of years and the reality is, things have been tough. But I’ve had an incredible run. I’ve been very fortunate. I caught a lot of breaks, so I shouldn’t complain, but I do.”

With that, Randall Grahm, who’s trying as hard as he might to be the adult, rushes off to pick up his daughter at school.

Alan Goldfarb has been writing about wine for about a quarter-century. His work has appeared in Decanter, the Wine Enthusiast, and he was the wine editor at the St. Helena Star, which he says was not unlike covering Catholicism at the Vatican. 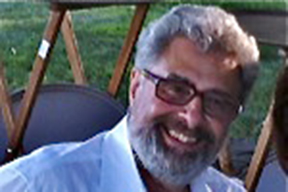 Alan Goldfarb has been a wine journalist for more than 25 years. He was the wine editor at the St. Helena Star where covering wine in Napa Valley was akin to covering Catholicism at the Vatican. He was the senior editor of AppellationAmerica.com; and his work has appeared in the Wine Enthusiast...