"Unheard of!" No More: Riccardo Baldi Wants to Put the Marche on Your Wine Map 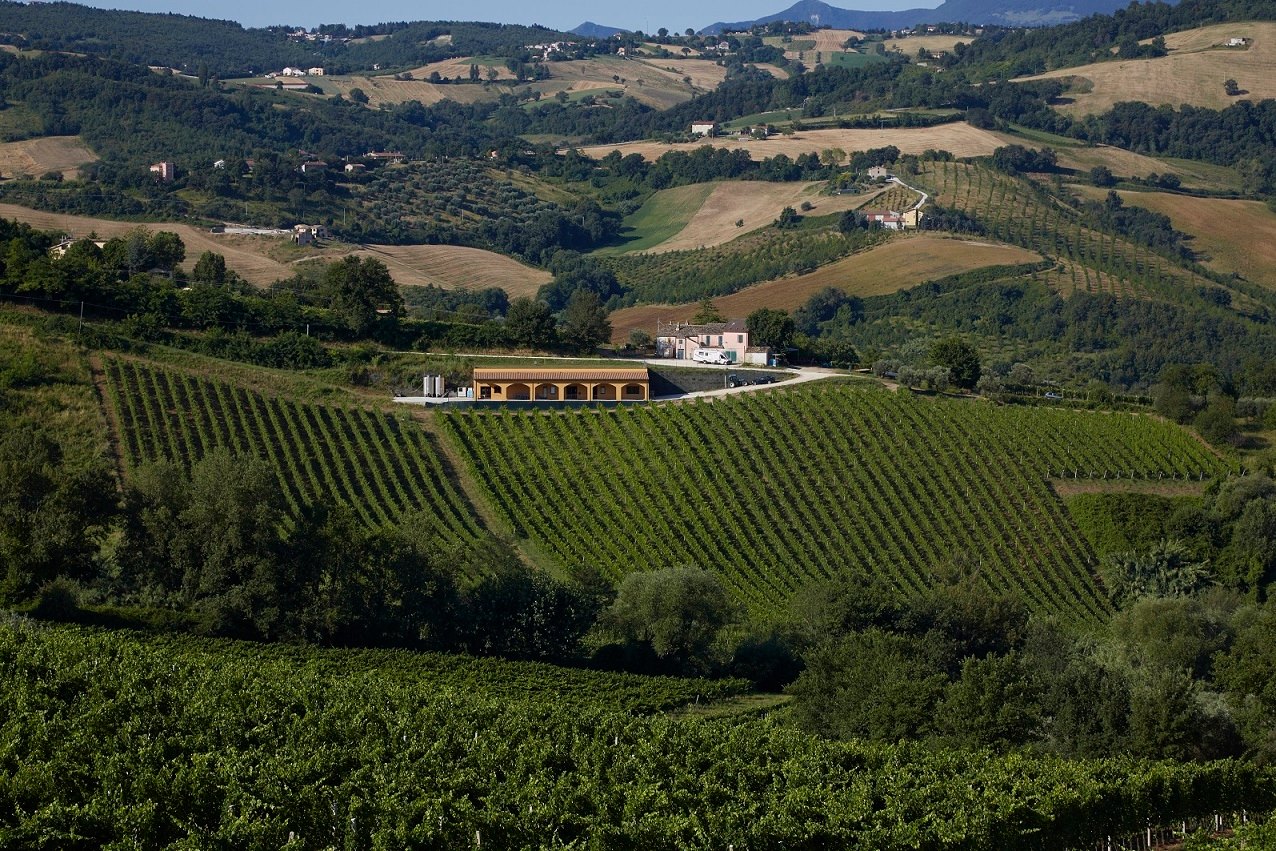 Riccardo Baldi is fighting a hangover. A metaphorical one, that is — a lingering perception of Marche Verdicchio that developed in the 1970s and ‘80s, when big commercial winemakers from this central Italian region overindulged the world with simple whites that diluted the region’s vinous reputation. Baldi sees a remedy: take a serious focus on terroir differences within the Marche, add a resolute commitment to responsible farming (in his case certified organic and practicing biodynamic), mix with dedication to minimalist cellar work, and see how the Marche looks to the wine world in the morning. 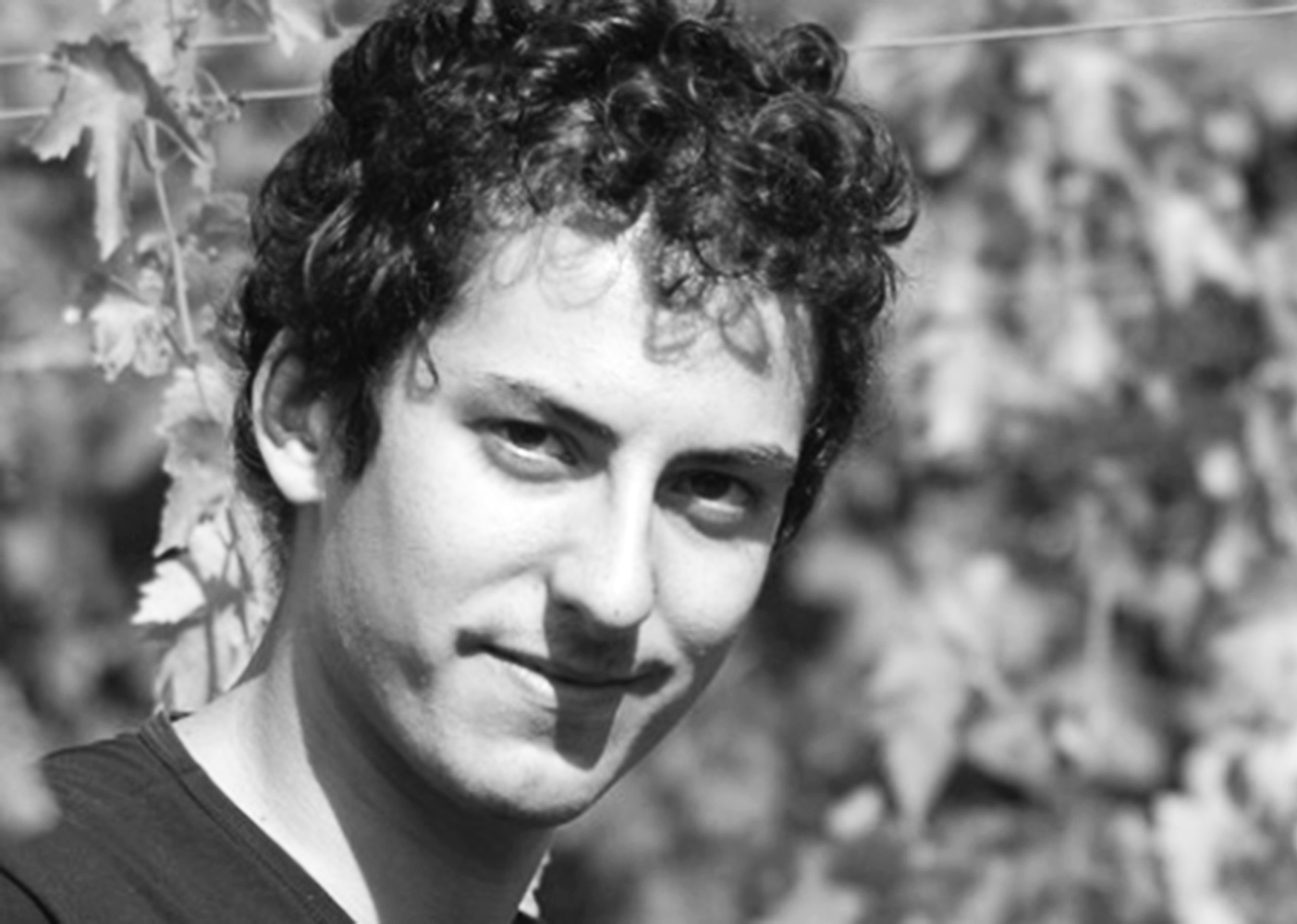 Baldi, just 28 years old, is a winemaker from the hilltop town of Staffolo, where, he says, “everyone makes wine, because we have 2,000 people and about 20 wineries.” Staffolo is distinguished by its proximity to the Adriatic, high elevation vineyards, calcium carbonate-rich clay soils, and a single grape: Verdicchio. Baldi’s parents were hobby winemakers here in the early 1990s, but within a few years were serious enough about it to establish a commercial venture, La Staffa. Baldi helped with harvests as a teenager, studied economic science at college, then returned to La Staffa for a vintage with his father, Mario, and at that point, “fell in love” with wine.  He recognizes his good fortune in having had as a neighbor and early mentor Lucio Canestrari of Fattoria Coroncino, one of the most respected producers in the Marche. “He changed ideas of Verdicchio around the world,” Baldi notes, and “showed me the way.”

When he felt ready, Baldi asked his father for 2 hectares to start his own wine project. Convinced of the results, the next year he made his first wines for La Staffa.  “In the past,” Baldi says, “my father made good wine, but the kind you can make everywhere. Now, in my opinion, my wine tastes like my vineyard. We are in an area where the soil is clay limestone, but very rich in calcium carbonate. This gives the wine a very salty minerality. We discovered four or five years ago that the 5 square kilometers between the village of Staffolo and the village of Cupramontana are 4 million years older than all the rest of the Denominazione. A little part of the soil, the oldest part, rose to the surface. So, the composition is almost the same, but the difference is we have five times more calcium carbonate in our clay limestone.” 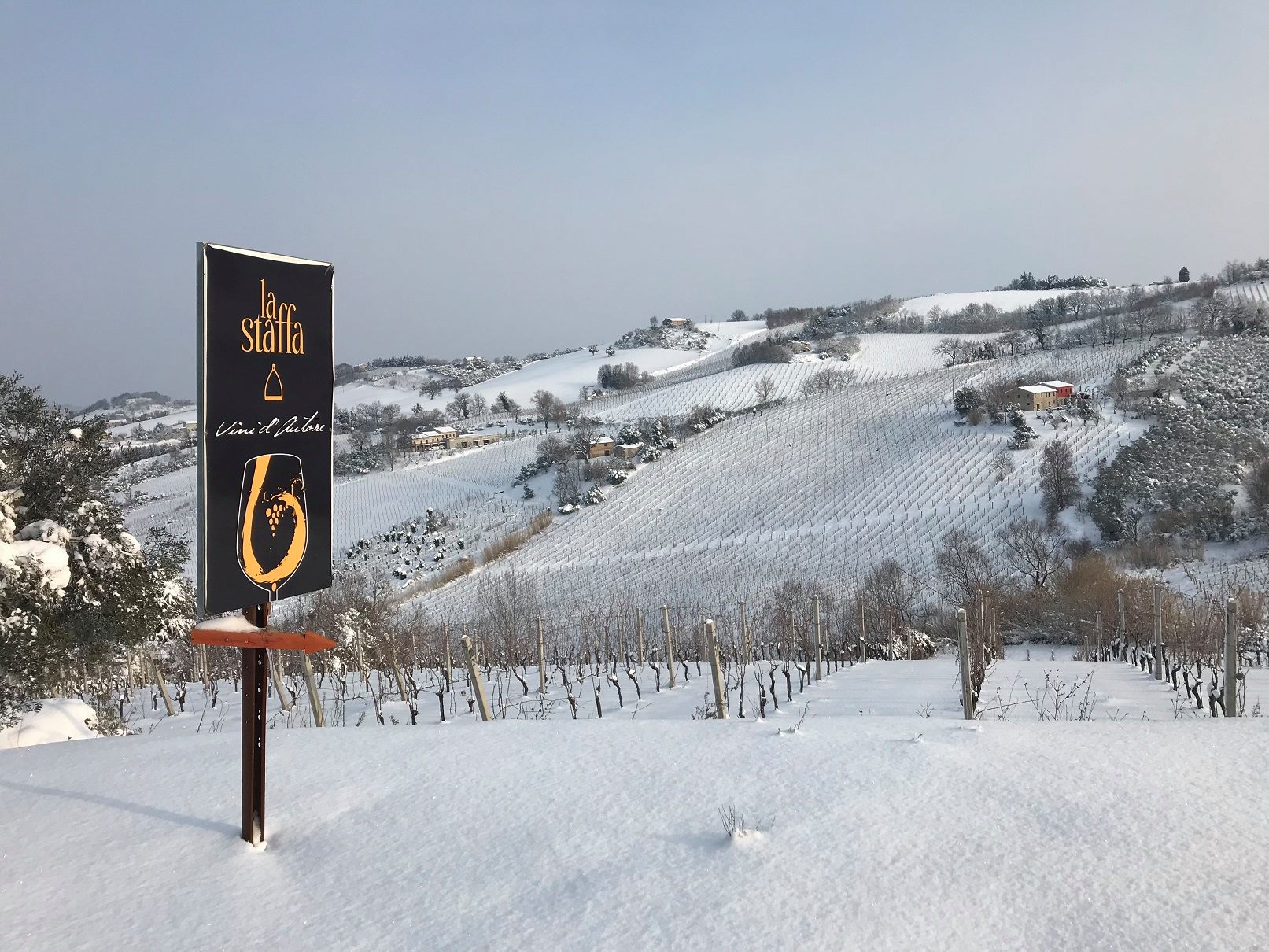 Today, Baldi, his father, and one other partner tend La Staffa’s 10 hectares of vines, the oldest of which were planted in 1972, spread over plots that vary in elevation between 400 and 500 meters above sea level, with diverse exposures. Vine training is all guyot because, Baldi believes, “guyot is a more beautiful way of pruning. It's more intelligent. If you are able to prune well, the vine has more balance and can reach a greater age.”

There is a long back story to how Verdicchio came to be the defining white grape of the Marche. But Baldi is concerned with the future. His greatest concern is to see the Marche gain recognition for its subzones — the smaller,  more specific geographic and climatological component parts of the Marche — and label the wines accordingly. There are the two designated regions for Verdicchio in the Marche: Castelli di Jesi, more influenced by the sea, and Matelica, by the mountains, both DOCGs. The wines of Jesi are characterized by a marine wash of citrus, resin, and herbs, and a slight but welcome bitter note on the finish. However, as Italian wine expert Ian D’Agata cautions, the wines “can be wildly different depending on the subzone they come from.”

“The Marche is very spread out over 24 different villages,” Baldi explains. “A river crosses the region, and the soils change in age and composition. There are a minimum of five to six different micro areas.” Baldi and his peers are eager to see the Marche given the same respect for its varied terroirs as Barolo has for hers. But he points to a large commercial producer in the area with vested interests in keeping things as they are. 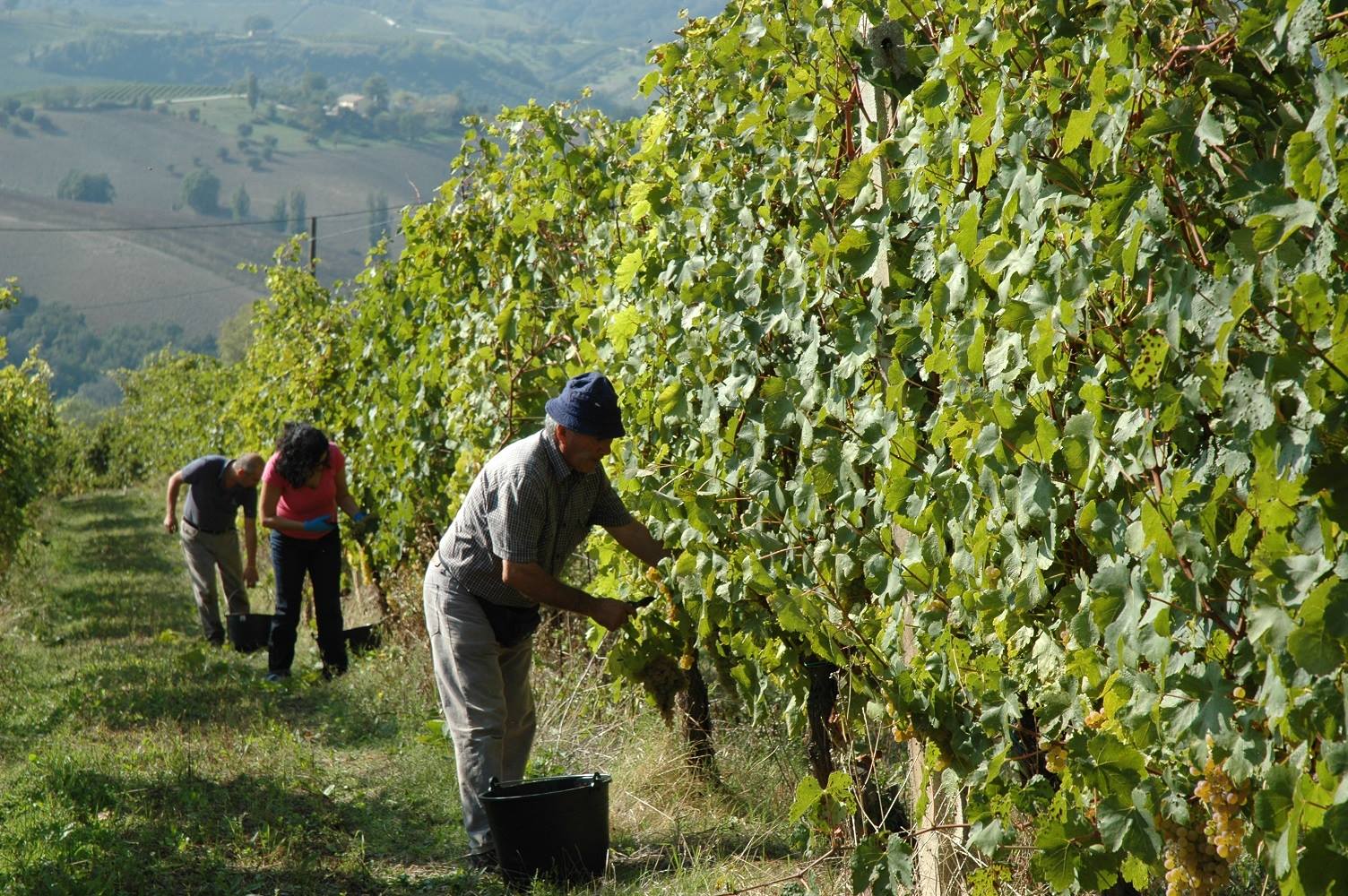 Baldi has thought out a possible workaround: Castelli di Jesi takes its name from the hilltop castles that dot the area around the medieval town of Jesi. If producers adopt the name of their closest Castello, consumers would have a tool for distinguishing terroir differences and qualities. “You identify immediately where you are,” Baldi says, “and where you're are speaking about. It's very clear. In this way, we can travel toward speaking about terroir.”

Another key element in Baldi’s vision for the future of the Marche is responsible farming. Baldi converted his family vineyards to organics in 2011 and gained certification in 2014. He is gradually introducing biodynamic practices, such as the application of nettle preparations to the vines to increase the effectiveness of copper treatments and sowing mixed legumes as cover crops to increase nitrogen availability in the soil. He says many of his peers are moving in the same direction.

Then there is Baldi’s winemaking itself. “In the cellar, the way of making wine is very simple,” he explains: only spontaneous fermentation, simple racking, occasional pump overs, fermentation in stainless steel and concrete tanks, and extended lees aging in concrete. Concrete is an important traditional material in the Marche, Baldi says. “At the beginning of the last century, they mixed Verdicchio in big barrel and concrete tanks everywhere. In fact, I have a lot of very, very old concrete tanks because I take them from the very old farmers that have stopped making wine. Every year I buy a couple more.”

The final piece is a tweak of tradition, Baldi’s way of linking the past with the present moment, and to add a bit of his own ebullience. Mai Sentito! (Italian for “Unheard of!”) is Baldi’s Verdicchio pét-nat — a first for the Marche. A bit of background is in order here. Verdicchio adapts well to many terroirs, ripens slowly but evenly, and holds its marked acidity reliably. The region's typically long growing season allows grapes to hang on the vine into October, developing intense and lively floral, citrus, and green almond notes. The strength of Verdicchio is not on the nose, but the palate. The best wines are dry and delicate, with a lovely, lemony salinity. But Verdicchio’s piercing acidity can be a liability if allowed to dominate its more delicate characteristics. There is a tradition of capitalizing on this acidity by using Verdicchio to make sparkling (spumante) wines.

But Baldi is the first to do so with a pét-nat. He explains: “I have many friends in Prosecco and Emilia Romagna. When I visited them, I fell in love with this kind of wine because it’s so easy to drink. You open the bottle, you finish the bottle. This is a very beautiful way of thinking of ‘easy wine.’ Not only easy, but beautiful because of the nose, the taste of the lees, that is something that makes the wine very particular.” 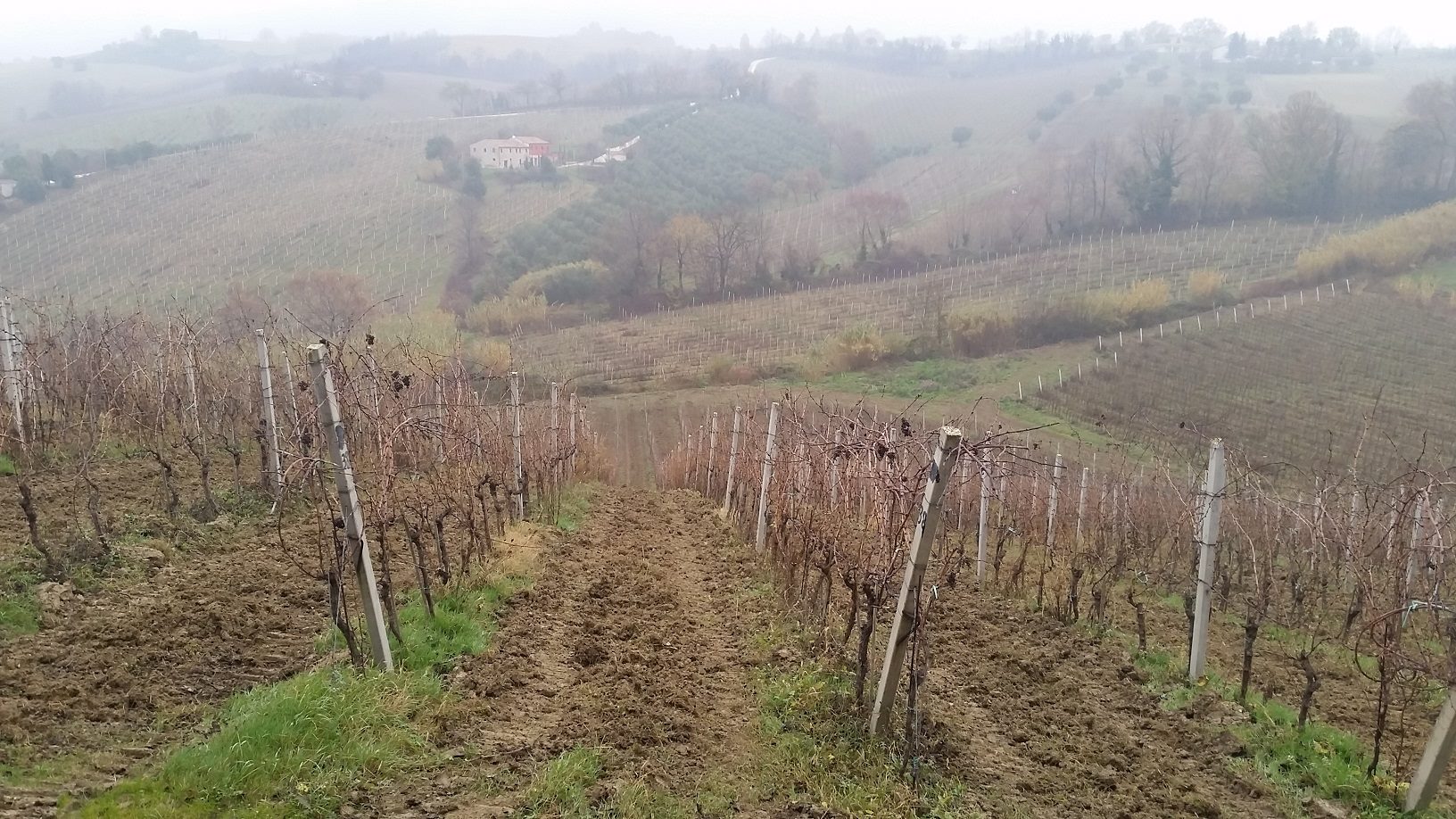 “Pétillant is the most awesome way of making wine,” Baldi believes. “The first sparkling wine of human history was from around the beginning of 17th century, in some areas in France and also Italy. They started to bottle wine, to save wine inside the bottle. Sometimes, the harvest arrived very late because they had not a good climate. Sometimes, when they bottled the wine, the wine was not completely dry. The fermentation restarted in the bottle. In the spring, they opened the bottle and found the wine sparkling. They started to understand how to make it intentionally.”

Unlike his other wines, this one is a blend of 80% Verdicchio and 20% old vine Trebbiano Toscano, added to round out some of the intense green notes he finds in the early harvested Verdicchio that goes into Mai Sentito! Aside from the grapes, says Baldi, “I add nothing in the wine, the only thing I've found is to bottle the wine during the harvest. The first 80%, 90% of the fermentation is in tank. When the wine is at 10, 12 grams of sugar, I bottle it and close the bottle with a crown cap.” The finished wine is bright, citrusy, refreshing and fun, but with a creaminess from the lees and the bubbles, and rings in at a super quaffable 11.5% alcohol by volume.

No danger of hangovers.