Who Cares About Vintages?

Upon receiving notice of the upcoming publication of a new wine book, "Buy The Right Wine Every Time: The No-Fuss No-Vintage Wine Guide", by Tom Stevenson, two things struck me. First, is that Tom has writing about wine for over 30 years and has published 23 (!) books. I've been writing about wine for ten years, and have published one (e)book. The good news is that, at this rate, if I live for another 220 years, I might be in Tom's ballpark when it comes to being prolific about wine. But the more important point that caught my eye was that this guide boldly stated on the cover and in the title that it is a "no vintage" wine guide. I haven't read the book, but I was so curious about this no vintage approach to recommending wines that I reached out to Tom with a query. He was kind enough to respond. 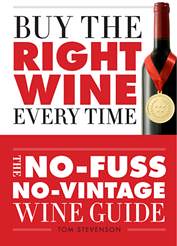 For the average wine consumer, do vintages really matter? Was it important to state that this is a "no-vintage" guide on the cover?

“It depends how you define average wine consumer....If by that you mean most wine consumers, then I totally agree that they do not think that vintages matter. In fact, most wine consumers are not concerned much about wine at all. They just drink the stuff. That is why I wrote this guide. I know the target audience, but how to deliver this book to them is a bit of a Catch 22 problem that no one has managed to crack. I’m not even sure that anyone has seriously attempted to reach out to the majority of wine consumers before. It was because the target audience’s disinterest in vintages became the primary driving force behind this guide that we, the publisher as well as the author, considered it most appropriate for the cover. We could be wrong. That’s the problem with trying to escape a Catch 22 situation – no one knows the solution – but we won’t know until we have tried it out.”

Do vintages have any impact on your regular wine purchases?

Jameson Fink has a decade of wine industry and blogging experience. Saveur Magazine nominated his site, jamesonfink.com, for a 2013 Best Food Blog Award in the Wine/Beer Category. He is a tireless advocate for year-round rosé consumption and enjoys a glass of Champagne alongside a bowl of popcorn.