After Shock: A Community Rallies in Napa Valley

John Trinidad, a wine industry attorney who lives on Main Street in Napa, was cleaning up from a party when his home started shaking. "At first, I thought it was a little roller," he explained. "But then, it got pretty violent, with full-on shaking. I had already braced myself, so just kind of rode it out, but heard a lot of things crashing around me. After the shaking stopped, I looked around and yep, a lot had come out of the cupboard — broken glass, broken plates, lots of things on the ground."

The 6.0 magnitude earthquake that struck southern Napa County on August 24 was the strongest California had experienced in 25 years. The media quickly turned its attention to wine and the economic impact of the quake. Although Napa Valley accounts for less than four percent of America's total wine production, it's the country's best-known wine region — and it's a big moneymaker. The region's wine industry has an economic impact of $50 billion annually.

At its heart, though, Napa Valley is a working-class, farming community. And in the wake of the earthquake, brand Napa Valley — $300 "cult" Cabernets, Michelin-starred restaurants, and the like — was overshadowed by kinship and kindness. 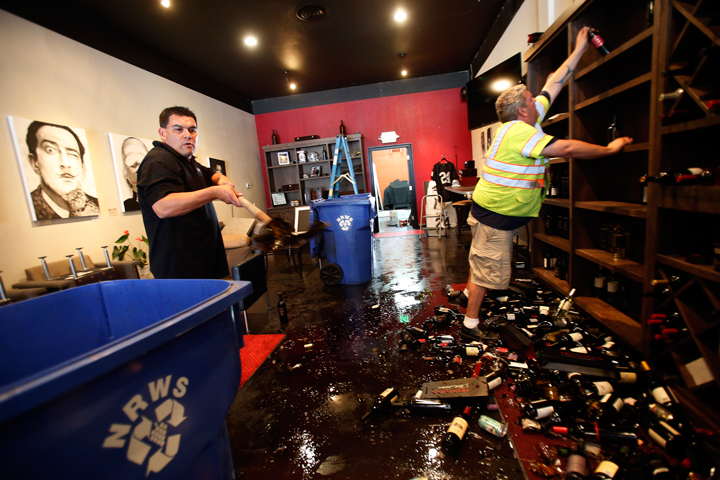 Alexandra Evans moved to the region from Washington, D.C., just nine months ago. She was floored by the generosity she witnessed.

Right: The community makes Napa and its wine what it is, as exemplified by cleanup efforts. (Business Insider)

"People up north — Calistoga, St. Helena — really weren't affected. But they were offering to help in any way they could," she said. "Coming from a big city, you don't necessarily expect to know your neighbors. Here, people loaded up their cars with food and water to help neighbors they'd never even met. The presence of community was impressive."

Evans proceeded to talk about all the activity she saw on social media.

On Facebook, Back Room Wines, a wine shop in downtown Napa, urged locals to bring by "stained and slightly damaged bottles" to share. "Talk about your week if you want, or just listen," the invite urged.

Cadet Wine & Beer Bar, a popular hangout that lost more than $15,000 in wine, took to Facebook and Instagram to invite locals by for beer. "We lost some wine but the beer taps are untouched," the owners urged. "Come by today for beer on us."

The earthquake sent all his 2013 barrels tumbling to the ground and forced his family to move out of their 1905 farmhouse. Yet when the Matthiassons turned to their customers for support, it was to raise money for the Napa Valley Community Disaster Relief Fund through a limited-release wine.

As wine writer John Brooks noted in an email to friends, "This strikes me as extraordinary. At a time when they've suffered significant damage to their home and their business (just look at the pictures), the Matthiassons have chosen to prioritize others ahead of themselves."

Stories like this abound. After touring Napa's wreckage for much of the morning on August 24, John Trinidad rested on his front porch with friends. As stories were shared, Matt Naumann, assistant winemaker at Failla, walked by with his young daughter.

"How'd you guys do?" Trinidad asked.

For Trinidad, the response was deeply insightful.

"To see a kid with that reaction was perfect," he explained. "We're all healthy. No one is hurt. Napa is an amazingly strong, resilient community. We'll be okay."

Want to lend a hand? Visit NapaVintners.com for ways you can help.