Fratelli Ponte's Massimo Ponte on the Beauty of Barbera 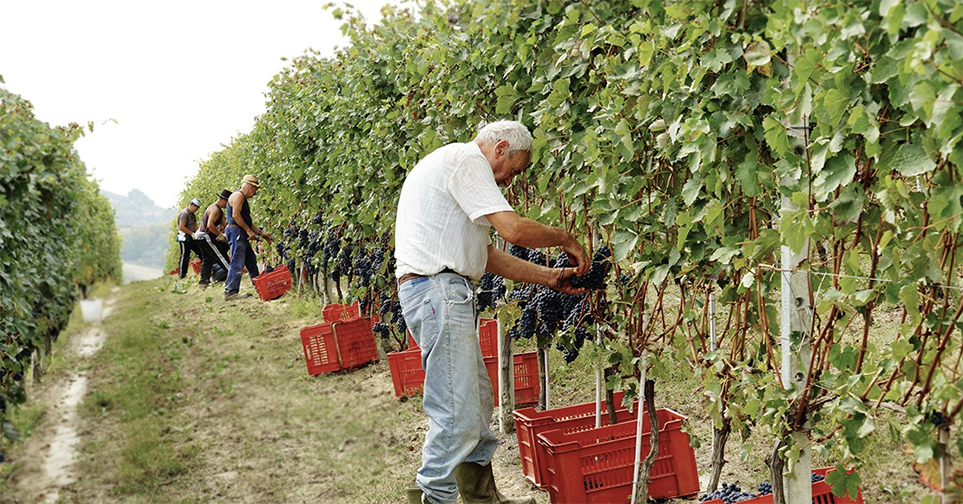 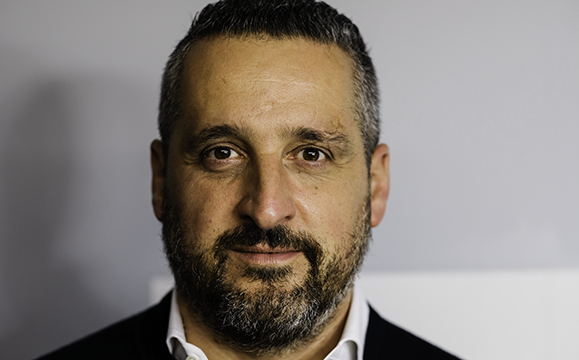 Massimo, tell us a little bit about the history of your estate.

My estate is named Fratelli Ponte Winery. Fratelli Ponte Winery is located in San Damiano d'Asti, in the Asti province. We are one hour and 30 minutes from Milan International Airport. One hour from Torino International Airport. San Damiano d'Asti is between Asti and Alba city. We are borderline to the Cuneo province. We have around 35 hectares. It was started by my grandpa before the Second World War in the small village. The name was Bricco Ronchesio, and the name of the winery was Ronchesio Vini. In 1968, my dad moved in the new location in the Frazione Gorzano and changed the name in Fratelli Ponte Winery. Fratelli means brother, Ponte is our family name. Right now my two brothers and I manage the winery. Me and Ivan, and my name is Massimo. Ivan and Renato are the other two brothers.

I follow the export market. My brother Ivan follows the winemaking process and Renato is in charge of all our vineyards. We grow several grapes because we are located in a special region. So we have so many DOCs, so many DOCGs. In Piedmont we have 18 wine DOCs and 41 DOCGs. So it's very complicated. The biggest part of our production is red wine, but we also grow Moscato and two different kinds of white wines. We make the Roero Arneis DOCG and the Terre Alfieri DOCG Arneis. For red we grow the Barbera, the Nebbiolo, the Dolcetto and the Brachetto.

Our regulations are always changing and it's very complicated to follow for us. I also can imagine it's complicated for the final customers, because it's not easy for us. But the DOC and DOCG certifications are very important because with this appellation our production is very limited compared to other regions. Also with the production, we cannot use the water for the irrigation. We have to respect the limited production. This is the reason we have this kind of appellation, and this is the reason that Piedmont is one of the best regions in Italy and in the world with regards to the quality of the wines.

Tell us about the terroir and the different areas that you make your wine.

Most of our terroir is calcarious. And in some places we have several colors of the soil. In some places it's red and in other places it's white. In other places, we have a lot of sand. And when we found the sand, we preferred to put in the Nebbiolo grape, because it's perfect for growing that. We planted last year five hectares of another new appellation, Terre Alfieri Nebbiolo DOC.

So it's just maybe three miles from the Roero. In the Roero you have the appellation, the Roero DOC and Nebbiolo d'Alba. But the grape at the end is the same. And it's the same grape as the Nebbiolo Barbaresco. You grow here the Nebbiolo and it is maybe Terre Alfieri Nebbiolo. The distance between the Nebbiolo Alfieri area and Barolo is 17 miles (27km). The distance to Barbaresco is 7 miles (about 11km). But at the end, the area is very small compared to United States. 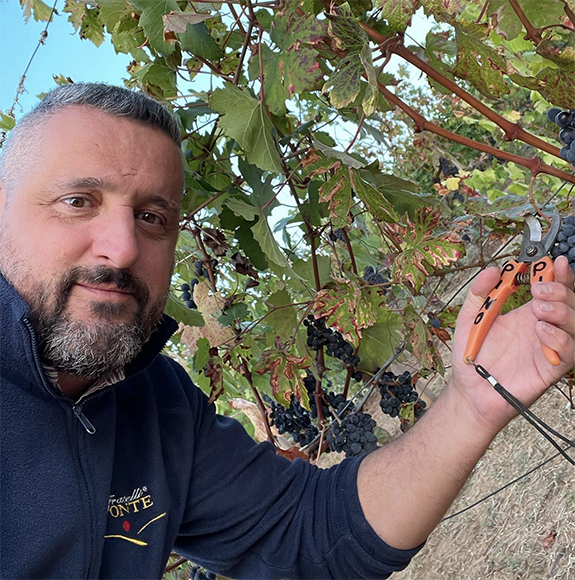 Talk a little bit about the Barbera that you make. How would you describe it?

The Barbera for me is my favorite grape, because you have to imagine that the Barbera, it was considered a poor wine, cheap wine for local farmers. I'm talking about 50 to 60 years ago. And in the last 20 years, the vision of the Barbera is totally different because people understand that this grape is a wonderful grape like the Nebbiolo, or like the Pinot Noir.

You can age this grape for many, many years, until it becomes fantastic. The acidity inside this grape, you can keep the wines for many, many years. In our winery, we make several kinds of Barbera. The entry-level Barbera is the Fiorellino, only stainless steel. It is not DOCG so we declare it red wine. So we don't have to pay the DOCG taxation. The price is competitive, it's an easy-drinking wine. We make the Barbera d'Asti DOCG. It's only stainless steel. The Piedmont DOC Barbera is the wine of my dad. My dad is... I want to tell you one small secret now. The old farmers, they like the wine a bit fizzy. It's also possible...For example the Nebbiolo, if you bottle the fresh Nebbiolo in the springtime, it becomes a bit fizzy. It was like farmer style. And the wine of my dad was that kind of wine.

My dad was one of the first that started to make that fermentation. Not like the Prosecco, but the process is similar. And we make the fermentation in stainless steel for about 28 to 30 days before cold-stabilizing the wine by chilling it. This allows the yeast to settle in the tank if we leave it a week or two and then we filter and bottle the wine. If we bottle it early enough, it retains a little bit of CO2, so it's mildly fizzy. But we don't export this wine. It's challenging to explain the spritzy character to many consumers, but there is a local market which enjoys this unusual "farmer's wine." 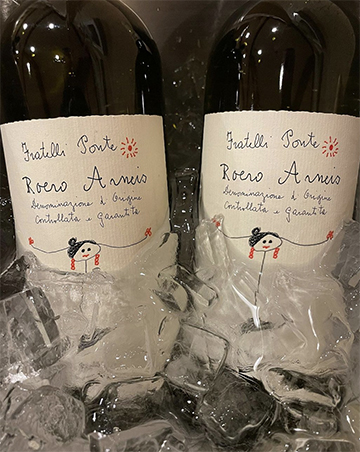 Talking about fizzy, you make Brachetto, which is a fizzy red wine.

Yes. The Brachetto is an indigenous grape. We have the vineyards in the San Damiano d'Asti area and we have the appellation, it is Piedmont DOC Brachetto. We usually harvest the grapes in early September and we typically macerate the juice with the grape skins for six or seven hours, not more. We don't want to extract astringent tannins and we monitor this as well as the color. Once we decide the time is right, we press the juice away from the skins and start the fermentation. This proceeds to approximately 6% to 6.5% alcohol, leaving the wine mildly sweet. It's fresh, aromatic, you can make Piemonte Brachetto DOC. The process is similar with the Moscato.

And it's a red, fizzy wine, which is-

Yes. It's fizzy. But it's not sparkling.

And would you say it's sweeter than Moscato?

No. In my opinion it's less sweet. So it's elegant, fragrant. You can also pair with cheeses. It's amazing wine.

And you also make a Barolo?

Yes. We make only 8,000 to 10,000 bottles a year of Barolo. We age the Barolo for two years in barrels. The vineyards are located in La Morra 20 minutes from Alba city. But we don't have a huge production, and also it's not easy to expand the production because the prices of the vineyards are crazy. And so we concentrate most of our production on the Barbera. 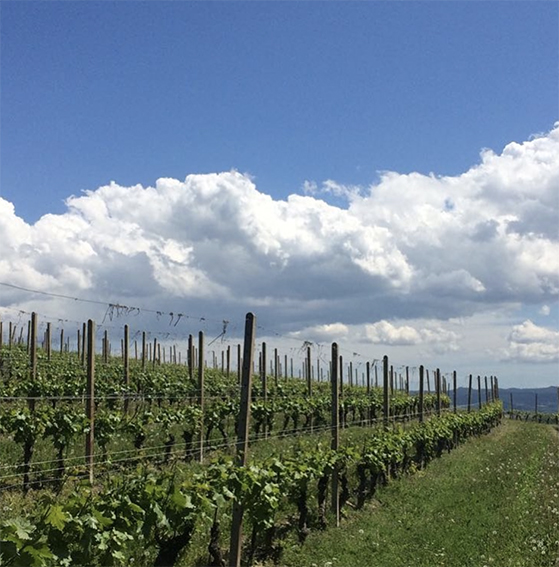 And talk a little bit about these fabulous labels that you have for your Barbera.

We can say we are very lucky because back in 2008, my brother was friendly with the famous artist and grappa-maker, Romano Levi who lived in nearby Neive, close to Barbaresco. My brother brought him the press cakes, the grape skins, after the fermentation of our wines and Levi used these to produce his famous grappa. One day Levi, as they were sharing some wine and salami, took the paper bag from a loaf of bread and he created for my brother the design which is now on our special "Romano Levi"-labeled wines: a Barbera and an Arneis. He signed the design "Romano Levi, 2-0-0-0."

It was so funny. And we use this label for our Barbero d'Asti Surperiore. Superiore it means superior, Barbera is the name of the grape, Asti is the name of the city, and it is our best selection of the Barbera grape. And it is picked the end of September or the first day of October. The production per hectare is around 9,000 kilos per hectare. To have the appellation Superiore you need to age six months, we age around one year in barrels, big barrels. We mature this special Barbera in barrels made by the famous Italian barrel-builder of Garbelotto and we use French oak. The wine sees cooperage of different capacities, ranging from 1,000 liters to 2,500 liters to a large vat of 10,000 liters. This wine is delicious when it's young, but becomes more complex with aging, so you can hold bottle for 10 or 20 years. It's wonderful!


Tell us about your philosophy of viticulture and farming.

Our philosophy has been that we must be sensitive to the growing season and the challenges each vintage presents. We try to make the best wine each vintage but every year is different. The weather changes and recently we, for example, spring is moving into summer and summer is moving in autumn. And for the last vintage, 2021, we had frost in April and then too much sun in the summer. It's hard to make wine when it's 40 to 45 degrees centigrade (104 to 113 Fahrenheit) in August. The grapes become raisins! So we need to pay attention to the growing conditions and we need a bit of technology in the cellar, so we have a new winery with temperature-controlled stainless steel tanks.

You don't use chemical herbicides or pesticides?

For example, we don't use pesticides for the grass. We have a special machine to clean. You have to imagine I'm talking about my grandpa, it was all day by hand. Now we have a machine. But I think there are a lot of wineries that use pesticides. But it's not good because you will drink pesticide because for sure it arrives in the grapes and you will find it inside the wine.

You use copper and sulfur?

Yes. We have to use the product because if you don't use anything, you don't pick anything. I don't want to be stupid, I don't want to say we don't spray. All over the world people have to spray; in California, in Italy, in France, in Australia. If you don't spray, you don't pick. You have to imagine the garden of my mom. We grow tomatoes, zucchini, but unfortunately we have to use some products like a copper product to protect the plants. Yes. It's natural at the end.

For me, it's a pleasure and it's a big honor to be in United States—to bring my culture, my family name and the work of my dad who unfortunately passed away January 1st, 2018 after spending all his life in vineyards. And he was an old farmer. My dad would wake up at five o'clock in the morning to work all day in the vineyards, Sunday and Saturday included. But one bottle at lunch and one bottle at dinner, it was normal. The breakfast of the old farmer, it was salami, cheese, one, two glasses of wine. I'm talking about eight or nine o'clock in the morning, but eight, nine o'clock in the morning for these people means that they worked three, four hours before. But I'm from this culture. And I'm proud of this culture.