How to Make Army Worm Wine, 'Cause It's Memorial Day

If you haven't heard of this yet, that isn't necessarily a bad thing. Army Worm Wine is as it sounds: wine made from worms. We're not sure if Army Worm Wine was inspired by anything military aside from the Army Worm (which in and of itslef isn't military), but the name invokes a service sentiment so we thought we'd share. Hopefully the wine you're actually drinking isn't accompanied by a gag reflex.

This Army Worm is actually a forest tent caterpillar, or Malacosoma disstria, that gets its name from the fact that it is often found hanging out in its web or sorts shaped like army-style tents. These "worms" spin their pad-like structures on trunks and branches, and the occasional tent, where they then molt. Found in the northlands of the United States and Canada, their defoliation won't kill host trees, but the larvae will cause significant damage to nearby plants as they feed. Anyway, they apparently make wine — or, rather, a form of booze that Minnesotan Ray Reigstad calls wine.

As he states on his official site: "As far as the process goes, I simply treated them as a combination of a fruit and a flower, after all, they eat leaves. Other ingredients include sugar, water, champagne yeast (from Canada), yeast nutrient, pectic enzymes, acid blend and campden tablets. This wine was made in Duluth, Minnesota in small batches using highly sterile equipment. It registers approximately 11% alcohol on the vino-meter."

We suppose you can call that wine...?

And for quick reference, The Free Lance-Star from Fredericksburg, Virgina, published a recipe for the concoction back on November 20, 2002 — so if you're looking for a D.I.Y. project, have at it! Simply don't hold us accountable for the taste, or any side effects for that matter. 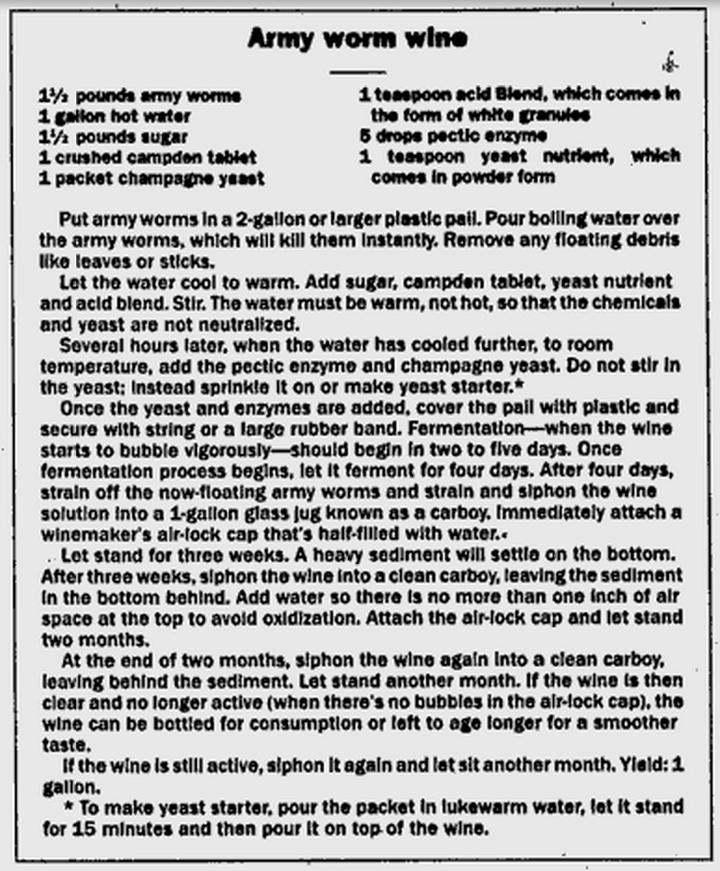