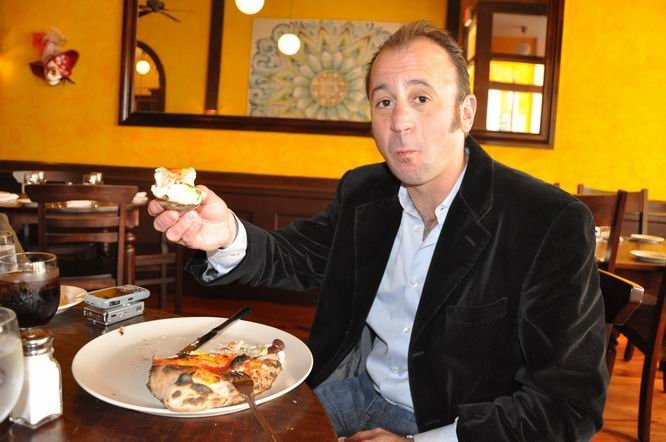 Jeremy Parzen is the kind of guy you want to have order "Do Bianchi" ("Two White Wines") and then share with you his love of Italy inside and outside of the glass. You can keep up with him on his blog, Do Bianchi, which you'll want to bookmark after reading our latest SpeakEasy interview. Topics discussed? Italian cinema, working as a translator, blowing away Napa Cab lovers with Italian wine, and giving French wine its due via a song about Champagne.

Regarding Italian wine, you state on your blog “..the great misunderstanding known as the Atlantic Ocean continues to dilute much of the information that makes the crossing.” What are some of the key issues or developments in Italian wine are not getting enough coverage?

I'm using the term "misunderstanding" in the sense of Harold Bloom's Anxiety of Influence: "Poetry," he wrote, "is misunderstanding, misinterpretation, misalliance." I think it's a good way to wrap our minds around the misreading of Italian wines on this side of the Atlantic. More than anything else, Italians view wines fundamentally as nourishment and a digestive aid, while Americans tend to place more value in the wine's value as a luxury, hedonist beverage.

The village of Barbaresco didn't have running water until the 1960s. There are many winemakers who can still remember when wines made from Nebbiolo were a source of potable nourishment. In those days, when the village was snowed in, you drank Nebbiolo for its nutritional value and the alcohol helped to "fortify" you during the cold winter. There's an ocean of misunderstanding between where Barbaresco, the wine, came from and how it's "applied" by a Goldman Sacks trader.

While at UCLA, you were an instructor of, among other things, Italian cinema. What are a few of your favorite Italian films and why?

There are so many Italian films that I love but Antonioni's tetralogy — L'avventura, La notte, L'eclisse, and Il deserto Rosso — is the body of work that I find most compelling. In those films, he sought to paint moving pictures and the frames (in L'avventura in particular) are among the most beautiful works of art that western culture has produced. His ability to tell a story by not telling a story turned critical theory on its head in the 1960s and the films changed my life when I first saw them as a grad student.

[Monica Vitti, star of  L'avventura, comments on the film's 1960 premier at Cannes.]

Of course, I also love the films of Pasolini but it's his work as a poet, essayist and observer of the sexual and consumerist revolutions that intrigue me the most. If I had to choose one Pasolini film it would be La ricotta, in which Orson Welles plays an American filmmaker making a move in Rome about the life of Jesus Christ.

What is it like working as a translator of the spoken word? Is it a literal word-for-word process? Or is there a bit of an art involved, especially considering colloquialisms, tone, etc.? And how does it differ from translating writing?

The greatest lesson taught to me by Stephen Sartarelli (one of the top Italian translators today, author of the Camilleri-Detective Montalbano translations) is that translation is not about accuracy. Colloquialisms, cadence, register....Sometimes, seemingly peripheral elements trump manifest meaning. As Lacan once wrote, the signifier is often more important than the signified. I once translated a book of poetry where I liberally adapted the original to evoke its meter. It's one of the works I'm most proud of.

[FIND OUT JEREMY'S TEN RECOMMENDED SPOTS IN HOUSTON FOR FOOD AND WINE.]

How did your year in Italy on a Fulbright scholarship change you?

I actually spent many years in Italy working as a musician and studying, often thanks to academic fellowships and scholarships. The Fulbright was special because it opened a lot of doors for me: during my Fulbright year I studied in the rare books collection of the Vatican (that was super cool) and I attended Italy's Scuola normale superiorein Pisa, the École normale supérieure of Italy (they were both founded by Napoleon).

What Italian wines/regions/grapes aren’t getting their due?

Gaglioppo from Calabria is sadly overlooked by wine lovers — Italian and not. There are so many great wines from Cirò, where they grow the wine, and they come in nearly every style imaginable, from the modern to the old-school. I've watched many "Napa Cab" lovers be blown away by the quality and tasting profile of the wines and I've also seen serious Italian wine nerds fall in love with them. 'A Vita is my favorite producer but there are many great ones.

As a musician, do you find music and wine intersecting?

Wine and music intersect on so many levels. There are a lot of California winemakers, for example, who worked as professional musicians earlier in their careers. Wine as a career, like music, requires extreme focus and personal sacrifice. But it also allows for a certain level of freedom, professional and personal, that makes it so attractive to people like me.

I've never made wine but I believe you can draw an analogy between bottling a wine and mixing a record. So much effort and thought goes into each. But then, once the final touch has been made, the wine or album goes out into the world and must fare on its own. Someone might pour it in a detergent-lined glass and think that it's awful. Someone might play it on a badly eq'd stereo and think it sounds terrible. But some will also discover the joy that you've put into it. I think there's an analogy in that magic.

I did once write a song about wine. The track is called "Bollinger." It's one of my favorites that I've done with my band, Nous Non Plus.

Finally, who inspired you to write about wine and who continues to do so?

Alice Feiring was an early mentor and Eric Asimov and Lawrence Osborne both encouraged me in my first years as a wine blogger. Their writing has been a model for me, Eric's in particular. Today, Italian winemakers inspire me: I want to tell their stories in a language that would sound familiar to them if they understood English. It all comes back to that great misunderstanding otherwise known as the Atlantic Ocean.