I was invited to have lunch with Kathleen Inman of Inman Family Wines, whose winery is located in California's Russian River Valley. While I was confident we'd chat about Pinot Noir, I was surprised that other topics would include worm manure, Pinot Gris, and grape-groping. So I had to follow up on our discussion with some questions to get a little more detail.

What are worm castings and how are they beneficial in the vineyard?

Worm castings are basically worm manure. Worms consume plant materials and/or farm manure and in the process they produce a humus that is rich in nutrients and micro-organisms. These micro-organisms make the vines more efficient in taking up the nutrients available in the soil. They can also help reduce unwanted things like powdery mildew spores that lay in the soil when the vines are dormant. The early spring applications of worm castings and worm casting teas help to reduce these spores and therefore the powdery mildew pressure in the vineyard. 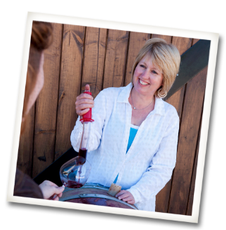 Pinot Gris seems like an unusual choice for the Russian River Valley. What attracted you to it and describe the style of the wine.

I had always enjoyed Alsatian Pinot Gris, with Zind-Humbrich and Trimach being two producers I drank a lot of when I lived in the UK. In 1999, I spent several weeks in Burgundy just before harvest with a longtime friend with a number of Premier Cru vineyards in the Cote de Nuits. He made appointments for me to visit a number of producers as I was researching both vineyard practices and cellar techniques in advance of planting my Olivet Grange Vineyard. It was at Domaine de l'Arlot, when then-winemaker Jean-Pierre de Smet shared some Pinot Gris with me from a secret stash, that I decided I would plant some Pinot Gris at my vineyard. I was attracted to the floral and citrus notes and lovely texture and minerality of the wine. I thought, "the perfect oyster wine," and that became my goal in making the Inman Pinot Gris. It is barrel fermented in small stainless steel barrels, kept on its lees and stirred regularly. It is a wine I personally love, and with only 1000 vines planted, it is always a small lot.

How concerned are you about the drought and what measures do you take in the winery and vineyard to conserve water?

The drought has concerned me for the last three years, but by January 2014, I was very concerned. As a native of Napa, I couldn't remember a time when we had been without rain for so long. I have always considered water a precious resource -even in non-drought periods- and so when I designed my winery, I took into account water conservation. In the cellar, all of our gray water is collected and recycled through a bio-mass reactor. Instead of cleaning with hot water, I use steam, which uses 93% less water to clean a barrel.

In the vineyard, I farm with very little use of the drip irrigation. The main purpose is for fertigation; when I apply the compost teas I brew, I water them in, but beyond that I may only water if we have an extended period of no marine layer and sustained temps in the 100s. With a relatively high water table at Olivet Grange, my vines have put their main roots down. Although we have had some rain since January, enough to help the vineyard this spring establish lovely strong shoots, I did make the decision to reduce yields by only taking out two canes everywhere in the vineyard. Normally, I rotate two and three canes by block to help stress the vines.

You confessed to me that you are a “grape-groper”. Explain how you make picking decisions beyond using scientific measurements.

Yes, I do call myself a grape-groper! Although I was very careful about scientifically accurate, statistically significant 100 berry samples by clone/rootstock and block in the early years as a winemaker and grape grower, these days, I go almost entirely on the way the canopy looks, the way the clusters feel and the taste of the berries and seeds and the way the skins and color breakdown when I spit out the skins and seeds. By using my sense of sight, feel and taste, I believe I am making more consistent picking decisions than when I picked by paying attention to sugar. The pH and TA [total acidity] are pretty consistent in my wines, whereas alcohol is not. In 2009, my estate Pinot Noir was 13.8%, the 2010 was only 12.5% and the soon to be released 2011 is 14.2%, but all have very similar pH without acidulation. Sugar development and ripeness are not always in parallel development.

We chatted about our mutual fondness for Beaujolais and you showed me photos of Pinot Noir grapes you decided to put through carbonic maceration. What prompted you to do this and what can someone smelling/tasting this wine expect?

Each year since 2009 I have experimented with an increasing percentage of whole clusters in my wines. In 2013, I decided to try four tons of native fermentation 100% whole cluster carbonic maceration. It was a little scary!! The result is really interesting: very earthy and wild flavors echoed in the high-toned aromatics. It will be an interesting component for the 2013 estate and I may well bottle some on its own.

You’re a huge music fan and every city stop you make around the country, you’ve scouted out some live music to see while you’re there. What are a couple of recent favorite shows you’ve attended? And what music to you listen to while you’re working in the winery?

If I am not doing a winemaker dinner on my travels, I usually look for a gig to attend. I love the app Bandsintown. I have discovered a number of small bands playing local clubs like Austin-based Wino Vino who I discovered in Burlington, VT of all places. They later came and played in my cellar at the winery. Very fun!! More recently I saw the Crash Kings when I was in Dallas and at the Bottom Lounge in Chicago I saw The Misterwives and The Mowgli's. Tonight I am hoping to go down to see The Lower 48, a Portland-based band I would love to have play at Inman Family Wines this summer.

In the tasting room and the cellar we listen to a mix of indie rock and indie folk (Black Keys, Arcade Fire, First Aid Kit, Yellow Ostrich, Fossil Collection, St Vincent, basically very eclectic) but during harvest I mix it up with some old Clash, the Dead Kennedys, Kaiser Chiefs and Palma Violets.