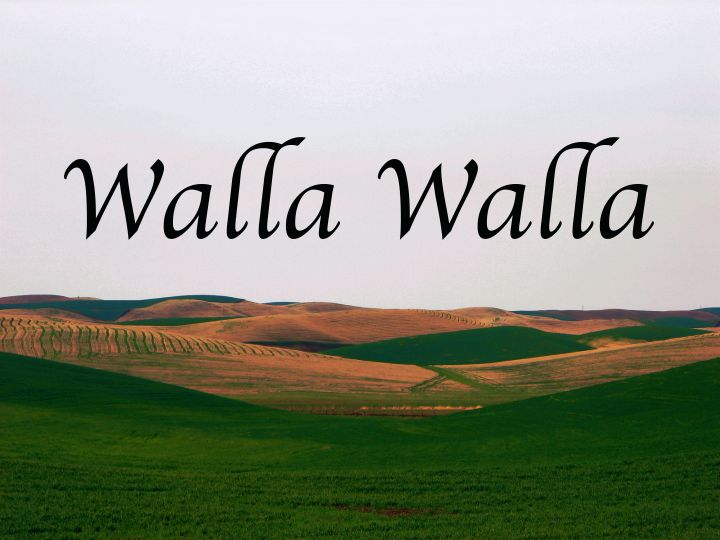 California steals most of the fame the wine world has to offer when it comes to Western United States wines. It gets the movies, it gets the name recognition and it gets the Parker points. A wine region with an echoing name, however, is giving California wines a run for their money: Walla Walla.

The first grape nursery in Walla Walla was started in 1859 by a man named A.B. Roberts. Roberts got started by importing 80 European grape varietals from across the border in the early Willamette Valley town of Champoeg, Ore. By doing so, Roberts struck gold. Not literally, but he was able to make a decent bit of money from the gold miners who came into the Walla Walla Valley in the 1860s and 1870s chasing real gold in nearby Idaho. By 1882, locally made wine had found its way into all 26 of Walla Walla’s saloons. In true Wile West style, those saloons were a staple in the town - A newspaper article from 1881 put Walla Walla’s official Census Office population at 8,716 people, meaning there was a saloon for every 300 people.

Unfortunately a series of ill-fated events proved that the success wasn’t meant to last. The deep freezes that typically occur every six years in the Walla Walla region hit two years in a row - both 1883 and 1884 - and deeply cut the number of vineyards. The Idaho gold rush slowed going into the 1900s. Finally, Washington state passed Prohibition in 1917, slamming the last nail in the coffin for the early Walla Walla wine industry.

Walla Walla took just as long to rebound from the reeling effects of Prohibition as the rest of the American wine industry. Athough non-commercial wine making contined as well as the illegal production of the Italian grape-based spirot Grappa. A wine maker named Bert Pesciallo - a major Italian influence that could be tasted even in today’s Walla Walla wine - was the first to attempt to revamp the commercial wine industry in the 1950s, but the deep freeze in 1955 stymied the effort for another 22 years.

Leonetti Cellar made a go for it in 1977, and it finally caught on. Just seven years later, Walla Walla was officially recognized as an American Viticultural Area (AVA). Leonetti Cellar is still making Merlot, Cabernet Sauvignon and Sangiovese today, although now they are competing with more than 100 vineyards and 19 wineries producing in the Walla Walla AVA.

Walla Walla (meaning “many waters” in the indigenous Native American language) is mostly in the southeastern region of Washington state, but around 43 percent of planted area in the AVA also creeps into part of Oregon, because “the finest wines reflect nature, and Mother Nature doesn’t recognize political borders,” the Walla Walla Valley Wine Alliance writes. It is entirely, however, in the Columbia Valley.

One of the most defining characteristics of Walla Walla is the ground floor. It’s made of loess - loosely compacted deposits of windblown sediment that gives the soil a yellow-grey color. Loess is sandy, wind-blown silt that can measure anywhere from two to four feet deep in the valley.

The annual rainfall can be as low as seven inches to the west, all the way up to 22 inches near the base of the Blue Mountains on the east. The elevation range is just as dramatic, ranging anywhere from 400 feet to 2,000 feet above sea level. The latitude is at 46°, which is equivalent to the midway point of Bordeaux and Burgundy in France.

There are 37 different varietals planted in Walla Walla, but five dominant the scene. Cabernet Sauvignon consists of 38 percent of the grapes planted, Merlot 18 percent, Syrah 16 percent, Cabernet Franc 6 percent and Malbec 5 percent. The original Italian influence of the region can still be tasted with some vineyards growing grapes like Sangiovese, Barbera, Dolcetto and Nebbiolo.